Mirrored object is misaligned when compared to its source object

I have an object to be mirrored on X. Its origin is at the world origin as is the 3d cursor. The problem is that when I apply the mirror modifier to it, its mirrored pair is not exactly aligned when compared to the source. (see pic 1-- it's the RightOrtho view))

I think this is an obj transform/align issue because the object was rotated etc during its build, and its nested under an empty that has also been rotated etc during the animation. So if I look at N, I see loc and rot info (the loc is of the empty) -- prior to parenting the object to the empty, I had applied AtrlA>all to the object.

If I apply Ctrl A>All to the object, that zero's out its Loc, rot -- fine, however now the obj's origin is now not aligned to the world origin so I can't apply Mirror to get a copy along X. Then if then try to get the origin back to the center by using Object>set origin to 3d cursor (which I placed at the world origin) then I can mirror the object along x again, but I'm back to the original problem of having its mirrored pair not being mirrored exactly right.

Unless I'm wrong, I think my solution is to get its Loc, Rot to 0 AND have its origin set to the world center so it can be mirrored exactly. I can get either loc=0 or origin to 0, but not both at the same time. If this is how to correct this problem, what are blender 2.8 settings to get that done please? Or what should I be applying another solution instead? 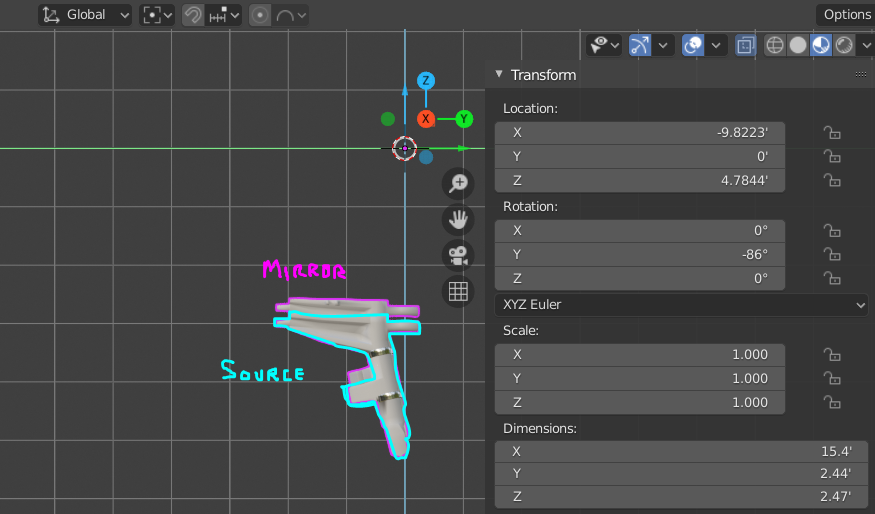 In this image you can see how the mirrored pair is "higher" in Z than it should be.

This one is of the top view... see how the mirrored pair is "closer" along the x axis compared to the source.

You can also see silver clamps from another object.. as you see those are being mirrored perfectly at source and destination (their rot, loc are 0 AND its origin is at the world origin, so as expected its mirroring perfectly) That's why I'm thinking my solution is to apply the same to the messed up part, but like I said, i'm not doing something right to get all Alignments done correctly to get a correct mirror.

One more thing to note, not sure how important this is... this problematic object (and I have a few others with the same issue) are nested/Parented to Empties, some of then parented to empties and other empties upto 3 levels deep. using these Empties to animate these objects for a game. Thinking that the parenting was causing the mirror problem, I've also tried unparenting the objects from the Empties (keeping transform) and then trying to get the loc, rot and origins to all be 0 and line up, but not been successful.

I've also tried ShiftD S X-1 and that does produce a copy in x-1, but that duplicate also then has the same rot and loc problems in exactly the same way as using mirror produces as is described above.

Any suggestion to help solve this, greatly appreciated.

Consider using a Mirror Object. This allows you to use another object as the reference for the mirror point and axes. This way, you don't have to mess around with the origin point.

An Empty Axis works well as a Mirror Object.

1
Can I mirror backwards?
0
Problem with Mirror Modifier and allignement