Here is mine area with objects (frame 0): 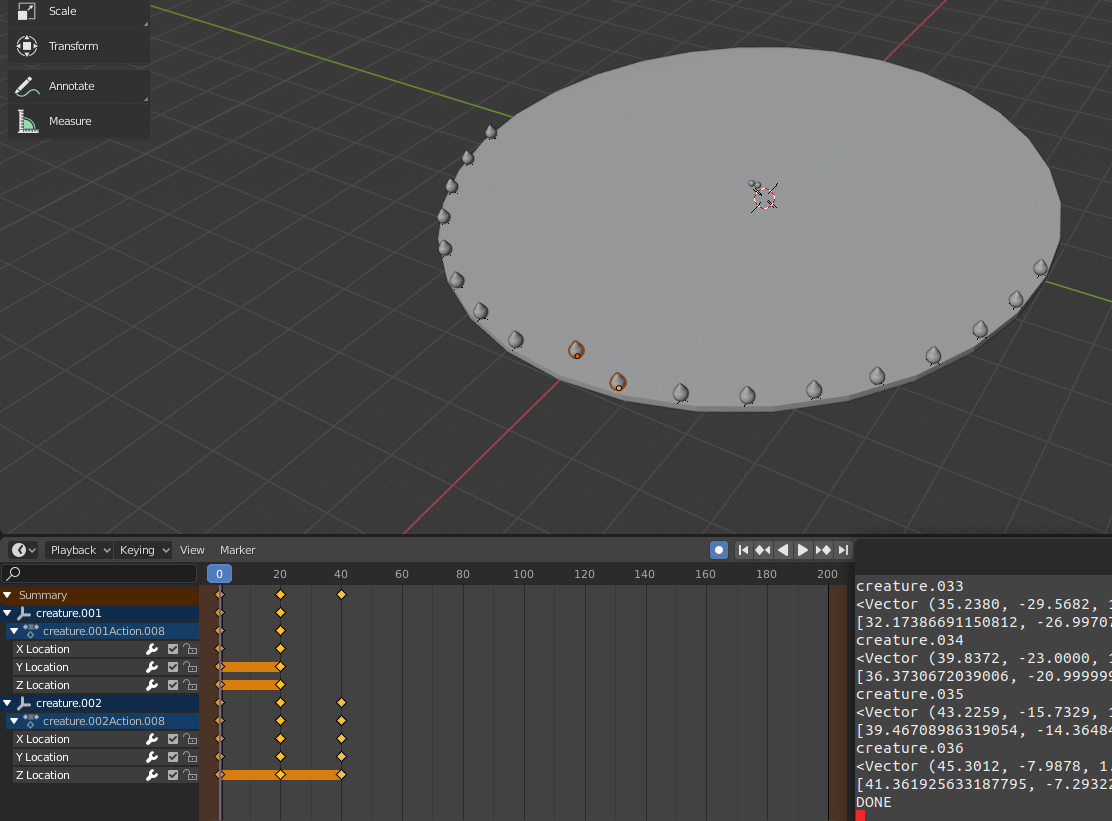 I'm trying to make objects move with python script. Every object on list should move into center of my area. I'm using for loop. Unfortunately first element doesn't want to keep it's initial position on 0 frame. It looks like it is replacing 0 frame position with 20 frame position and then it works properly but it makes every move 20 frames before rest of them. I don't have idea why it is not working properly. Can you see my code and try to find out what is wrong with it? 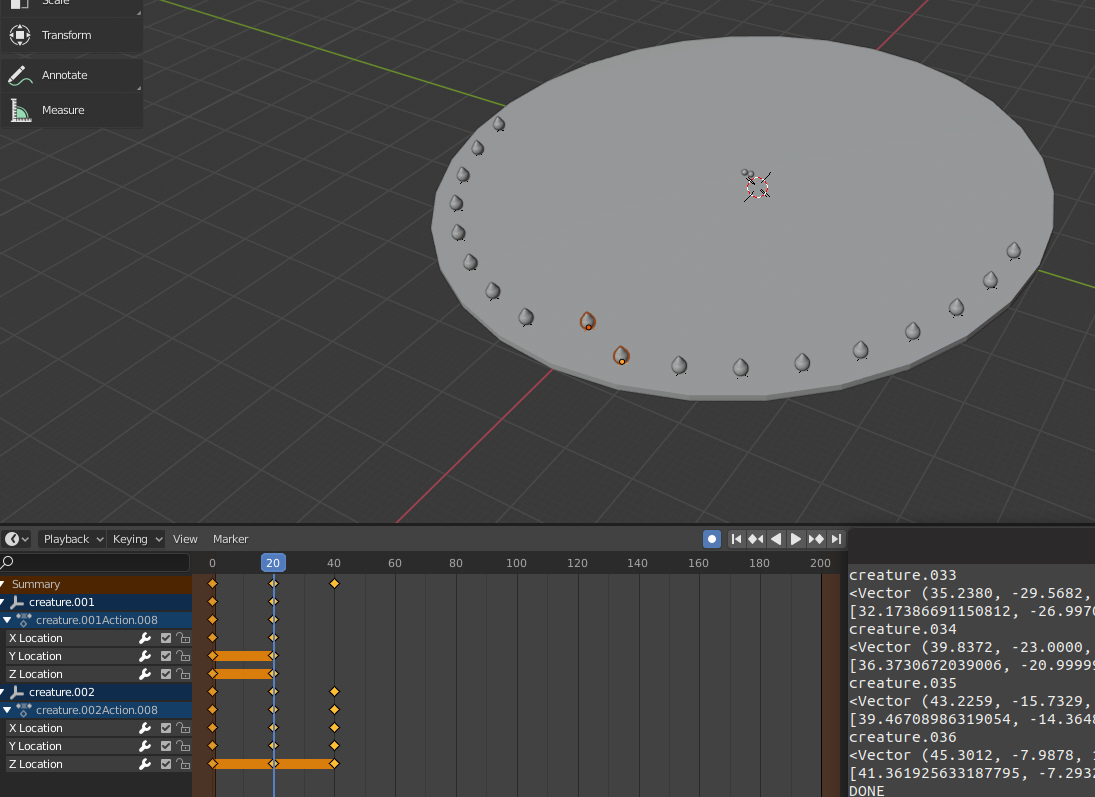 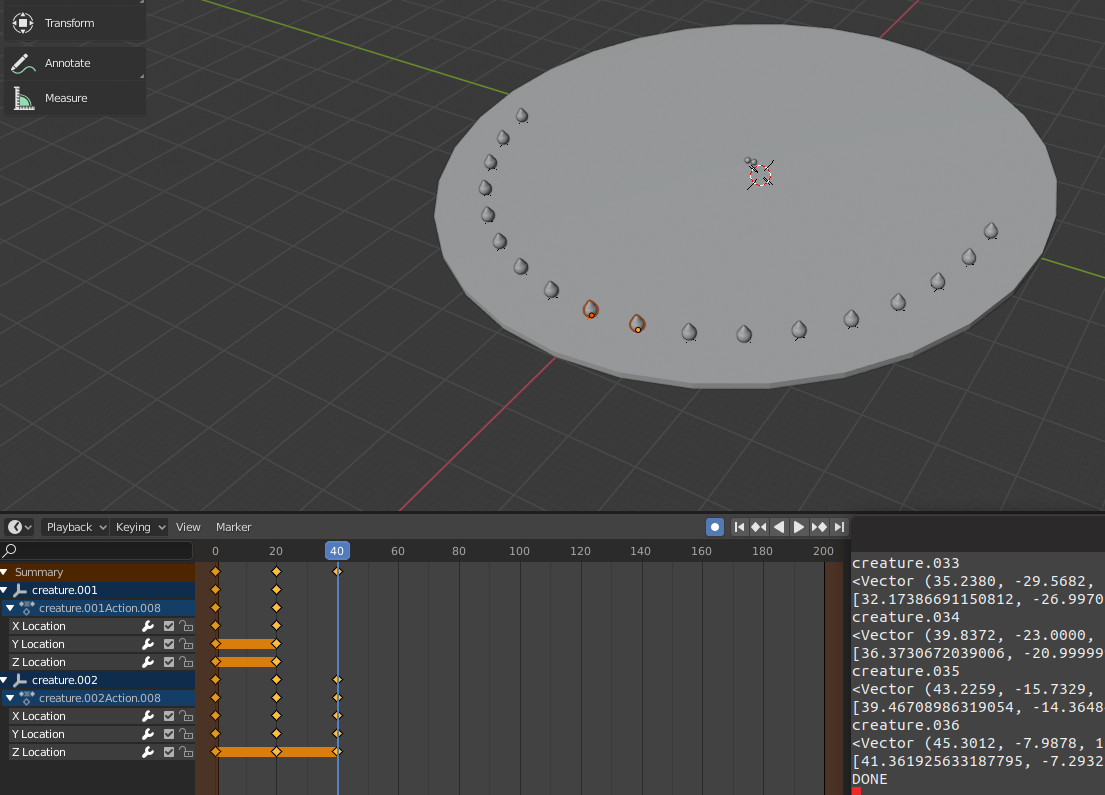 It looks like you have more than one problem: One try using obj.keyframe_insert(data_path='location', frame=frame_num)

Also, you set frame_num = 20 inside your while loop... which should cause an infinite loop.

How to keyframe_insert without moving the object

Can completely avoid any trig methods and use vector math instead. The length of an objects location vector is its radius from the origin of its parent. In the case of no parent, the distance from (0, 0, 0)

To move it to half the distance from the origin can simply ob.location *= 0.5 no angles necessary. To do this for only x, y ob.location.xy * = 0.5.

One last thing it would appear creatures_names in question script is a list of objects not names, making for unnecessarily using obj, and ob which are the same

Not the answer you're looking for? Browse other questions tagged python keyframes or ask your own question.

0
How to keyframe_insert without moving the object

0
Controlling animation speed for different elements
0
How to run physics simulation frame-by-frame using Blender's Python API?
2
How to create drivers but maintain the ability to modify the property?
1
Translating the center of a group of objects to the world origin
1
Extract object properties from animation for each frame
4
Problem with randomize transfom
1
Get frame to frame object location Blender 2.81 +
0
Is it possible to make a change that affects the whole animation but keeps the original animation relative to the change? (like 3ds Max)