I started a new project and added a cone beside the default cube and I was able to easily set the pivot point to the cube, and then to the cone and all mouse movement, rotation etc worked as I would expect it to. So I believe I understand the what and how but somehow I must have messed up my larger project.

I did find a post that talked about moving in and out of camera view (numpad 0) could cause a similar type of problem and that using numpad '.' would clear it but that has not worked for me.

It sounds like the viewport is no longer locked to the 3D cursor to me.

Press "N" to pull up one of the side menus, and switch it over to the view tab. Click on "View Lock" and check if "Lock to 3D cursor" is selected 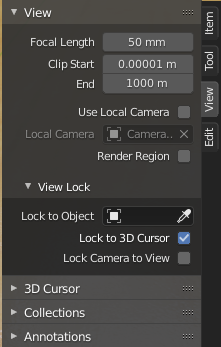 Not the answer you're looking for? Browse other questions tagged 3d-view 3d-cursor navigation or ask your own question.

205
Why does the zoom sometimes stop at a point?

1
blender viewport is rotating around an unknown point
3
How rotate the 3D view irrespective to the global Z axis using keyboard?
2
Is it possible to have Blender orbit with pivot point the mouse cursor?
3
Blender 2.8 - Panning in the viewport
0
Can't zoom after pressing Numpad (.) on object - Blender 2.8
0
2.8 how to move 3d curser like a normal object?
1
How do I set scale pivot point to cursor in Blender 2.90.0?
0
finding the pivot of the camera using python