The straight line is a 2D Bezier curve, with two control points. The bevel function gave it some thickness. The circle is a separate 2D object.

Now, when the circle moves, the idea is that that end of the Bezier curve should move with the circle, staying at the circle's center. The other end should remain where it is.

So, somehow that end of the Bezier curve should be "attached" to the center of the circle. I thought using the Hook modifier. But that requires a vertex group to attach to the object. Bezier curves apparently can't have vertex groups (couldn't find it in the property view), so can't use the modifier. Then I considered using the parent function, but apparently a vertex can indeed parent an object, but an object cannot parent a vertex (at least, I couldn't find a way). And anyway, again, Bezier curves don't have vertices. So wouldn't have worked either. 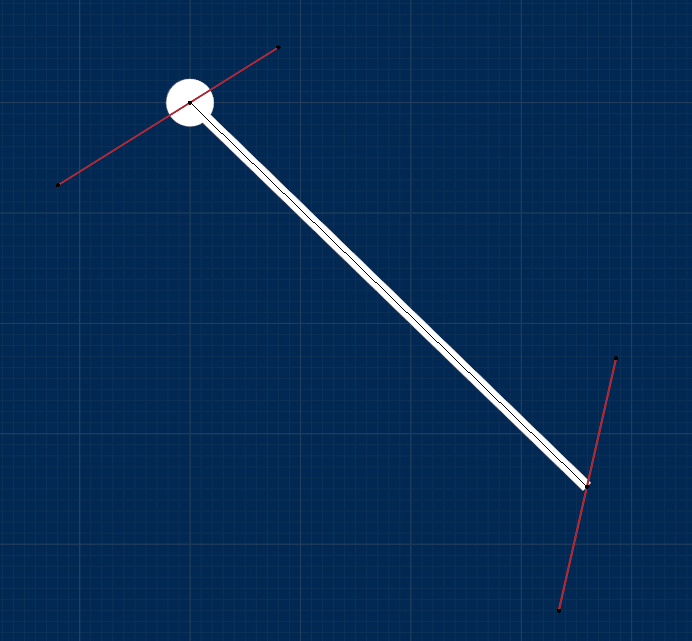 Suppose you want to make Object A the parent of a control point in a Bezier curve (Object B).

When you now move Object A, the control point will move accordingly, while the other control points of Object B won't, hence deforming the Bezier curve.

PS: you can also use this method when Object B is a simple mesh object (i.e. vertices instead of control points).

Not the answer you're looking for? Browse other questions tagged modifiers parent bezier-curves or ask your own question.

2
How to draw distance lines to a central object?

4
How to tell which objects are using a Bezier Circle as bevel object?
2
How to rotate bezier circle with an object following its path?
1
Hook to Empty Object on a Bezier Curve doesn't work
2
How to access coordinates of Bezier curve control point handles?
3
Bezier Curve: Bevel Object is creating a flat surface
1
Python: Store rotation / normal in bezier curve point?
2
How do I parent an object to a vertex which is modified by a curve?
4
Bezier Curve - Split one large end into multiple wires
1
Aligning empty object with Bezier curve point using Python
1
Move Object aroud curve withot deforming