I work with Blender 2.81a and I have a problem with some artifacts in the shadows of objects with smooth shading. Based on the release note of Blender 2.81 ,(https://www.blender.org/download/releases/2-81/), I expected this problem to be solved. There’s a note with a comparative screenshot saying: “Reduced shadow terminator artifacts for bump mapping with diffuse BSDFs.“

There’s no detail about the issue. There’s a mention about “bump mapping”. I have another scene with bump mapping and the problem is the same as in my test shown below. Here’s a screenshot of my test below.

The only solution right now is to increase of the number of polygons with a “Subdivision Surface” modifier. However that makes a crazy amount of polygons and the modifier cannot fit all situations.

Another element of solution is about the light. I noticed that happens particularly when there’s one directional light in the scene like a sun light. Increasing the “Angle” parameter creates a smoother effect. Too much of this becomes blurry and unrealistic. My screenshot shows a sun with the angle 6.4 degrees.

These artifacts only happen in Cycles. Eevee seems to be correct.

I expected this problem to be solved. However it is still present. Am I missing something? 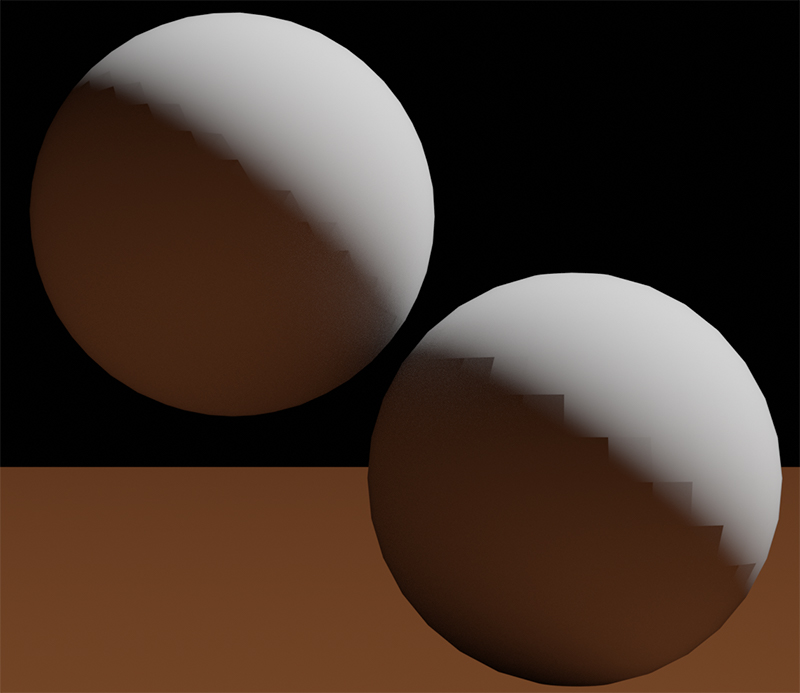 A setting called Geometry offset is enabled by default, hence the artifact should not occur anymore.

The geometry offset value can be tweaked in the object properties Object Properties \ Shading \ Shadow Terminator.

Further details in this video.

In blender 2.9, a Shadow terminator offset parameter has been added under Object Properties \ Shading. It is set to 0 by default, increasing its value fixes the problem.

Demo and explanations in this video.

The artifact disappears when adding more geometry, either by subdividing the mesh, or adding a subsurf modifier.