For short I want to make an addon which would allow to select keyframes from the graph editor (and eventually also from the dope sheet) and change their value at once using an input popup. And more complex options like incremental inputs and other stuff, but that's for later.

I did a flow chart of what I aim for the v1, if it can help you: 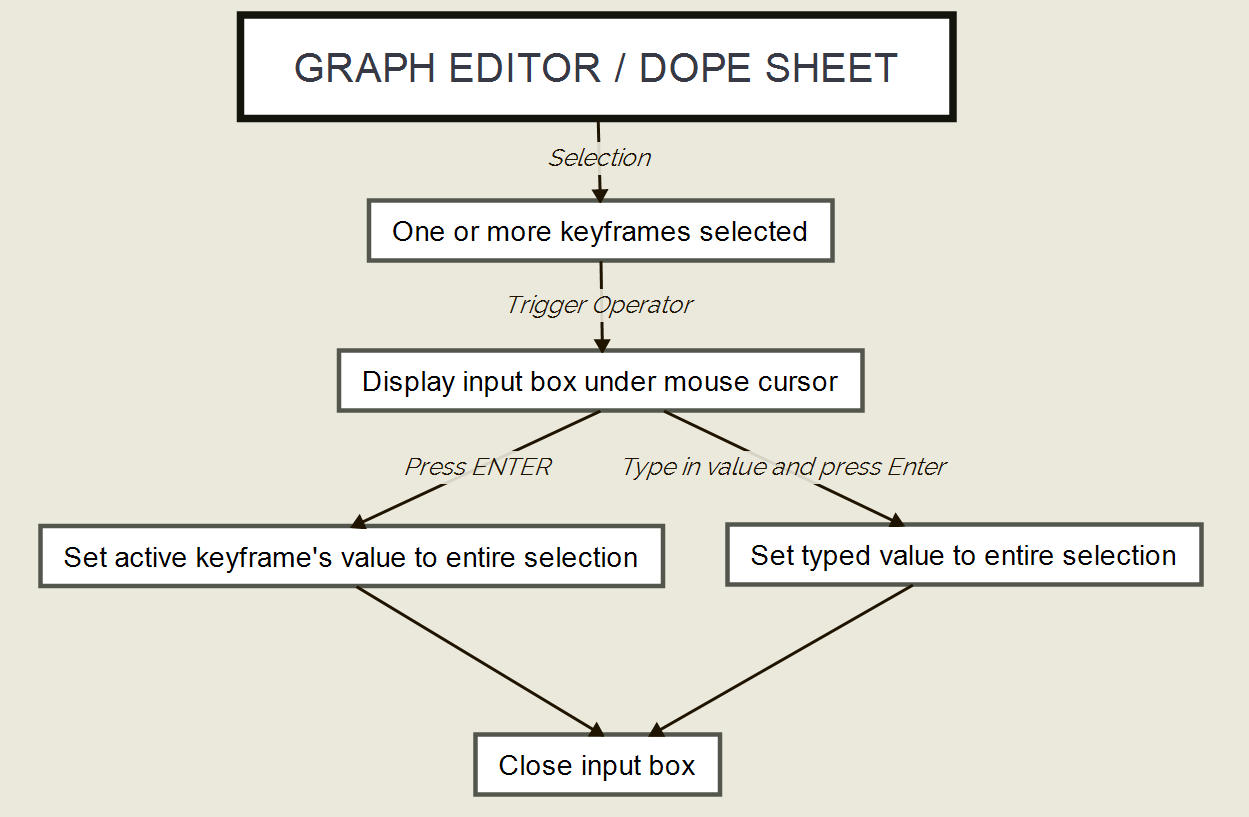 I'm struggling with the core action:
Set a value to the selected keyframes, from the graph editor.

My first tries were to basically edit some keyframe values in the graph editor and work from what pops up in the info editor as I usually do:

Which doesn't work on its own and returns:
AttributeError: 'Object' object has no attribute 'co'.

I also noticed this in the Python Tooltips:

But with no success.

I also tried to see how other people did on Internet and tried stuff like these:

I also saw lots of people actually replacing their existing keyframes by new ones with new values, but to me it seems to be a lot of instructions for very few effects, and I guess it will not perform correctly on large scale operations.

I may also indicate a few needs:

Thanks to brockmann's answer I now can go further in my script.

I just have a couple more wonders:

Set the pop-up value from the active keyframe's value

Right now, the default value of the popup is 0 at first start, and then it keeps the last value used everytime it pops again. I would like it so that each time I call the popup, it shows the active keyframe's value.

So as far as my python skills can go, it means to find a way with blender's api to get the xy coordinates of the active keyframe and assign the Y to my-float_y, and put this procedure at the very start of the operator, right?
I tried this but it doesn't output anything I want:

How to change the UI

The cons are that it takes lots of screen-space just for a value, and it requires to set the value, press enter and then click the OK button.
I can kind of make it simpler by reducing the width because the value always overlays the text, but that's not enough:
It would be more efficient if it was a more direct interaction like i.e. the samples inputs:

Ideally I would want just something small and simple like this (but with a float):

When editing the value of the keyframe you have to set both handles as well. Example on how to set the value based on our famous Operator Simple template (should work for the dope sheet too):

Alternatively you can use an invoke_props_popup:

See: How do I get invoke_props_popup to work?

Not the answer you're looking for? Browse other questions tagged python animation or ask your own question.

4
How do I get invoke_props_popup to work?
1
operator draw() method in Node Editor

3
Export animation curve as values?
0
Using Python to create a popup that changes an object based on the input
11
Set Active FCurve in Graph Editor through python
1
How do I change the interpolation of multiple keyframes in the graph editor (f-curve)?
1
Active Keyframe Panel is not showing in the graph editor
1
Pose of keyframe locked after using graph editor
0
Proportionally edit fcurve to match last keyframe with the first
1
Is it possible to select Keyframe in graph editor using python?