I am a long time Blender user and I built some nice scenes with it. I also love the new 2.8 but ever since I was working with volumetrics in Blender I was never really happy with it.

So what I want to achieve is something like this: 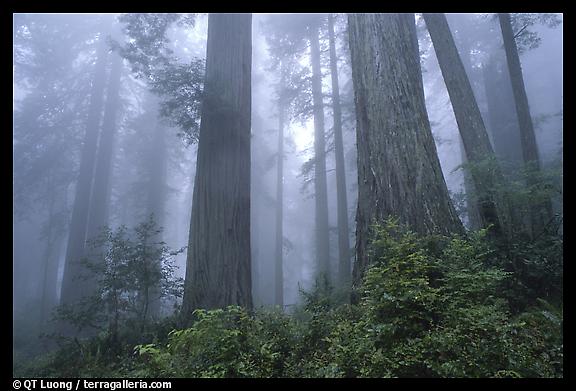 A Fog, which brighten up things in the back + dont nessessarily make it muddy grey (as it always happens in Blender)

So I know three ways of creating dusk in Blender, but none of these is really what I want.

2.Create A volume scatter node in the world node editor and plug it into volume. There I get pretty much the same thing, but over my whole scene. Still not right ..

3.Add Volumetric Fog in the composer AFTER the rendering. But this is kind a complicated to be honest. You need to figure out the exact numbers for the volume density and render over and over again. I gave up on using this technique because it was too complicated to be practical in my eyes

In game engines like Unity or Unreal I can achieve this with one or two buttons, and it looks exactly like I want it to look. Therefor I even found a cool gif/vid on twitter: https://twitter.com/i/status/1148767976096747526 check it out. Something like this or at least a world volume adjuster HAVE to be possible in Blender. How?!

Just in case anyone still wonders about how to jazz up the fog in Blender: Cycles, like Arnold, has the raydepth for Volumes set to "0" by default. This is to make rendering faster. As you probably know Volumetric rendering is punishing on a path-tracing renderer. However, that setting means that no actual scattering happens within the volume and results in muddy grey fog. Not necessarily a bad thing depending on the look you're going for but if you want more glowy life in your volumes without making it emit light i.e. physically correct then you need to go to: 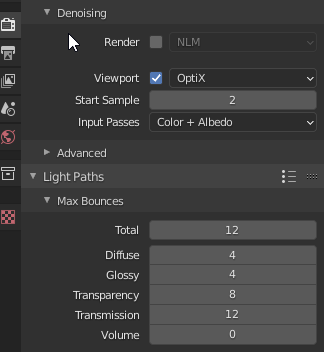 In the light path settings add a non-zero number to volume. Beware, it will drastically increase render times. I find 1 or 2 is more than enough. You'll also need to adjust the "Total" value to reflect the sum of all you light bounces.

I'm sure you figured it out by now, but it took me a while to find the right answer...so for anyone else: I used the Principled volume node At first it is also dark, but take a look at the Emission Strength and Color Parameters...the dark fogs shall lighten up for you!

To me Volume Scatter node is not an option if You want to use some HDRI as lightning or background image.. doesn't matter how low I make Density and Emission it will always override any background.. but in my opinion would be good in this forest image except it gives effect to early.. on that image it looks like fog starts from the second tree.. 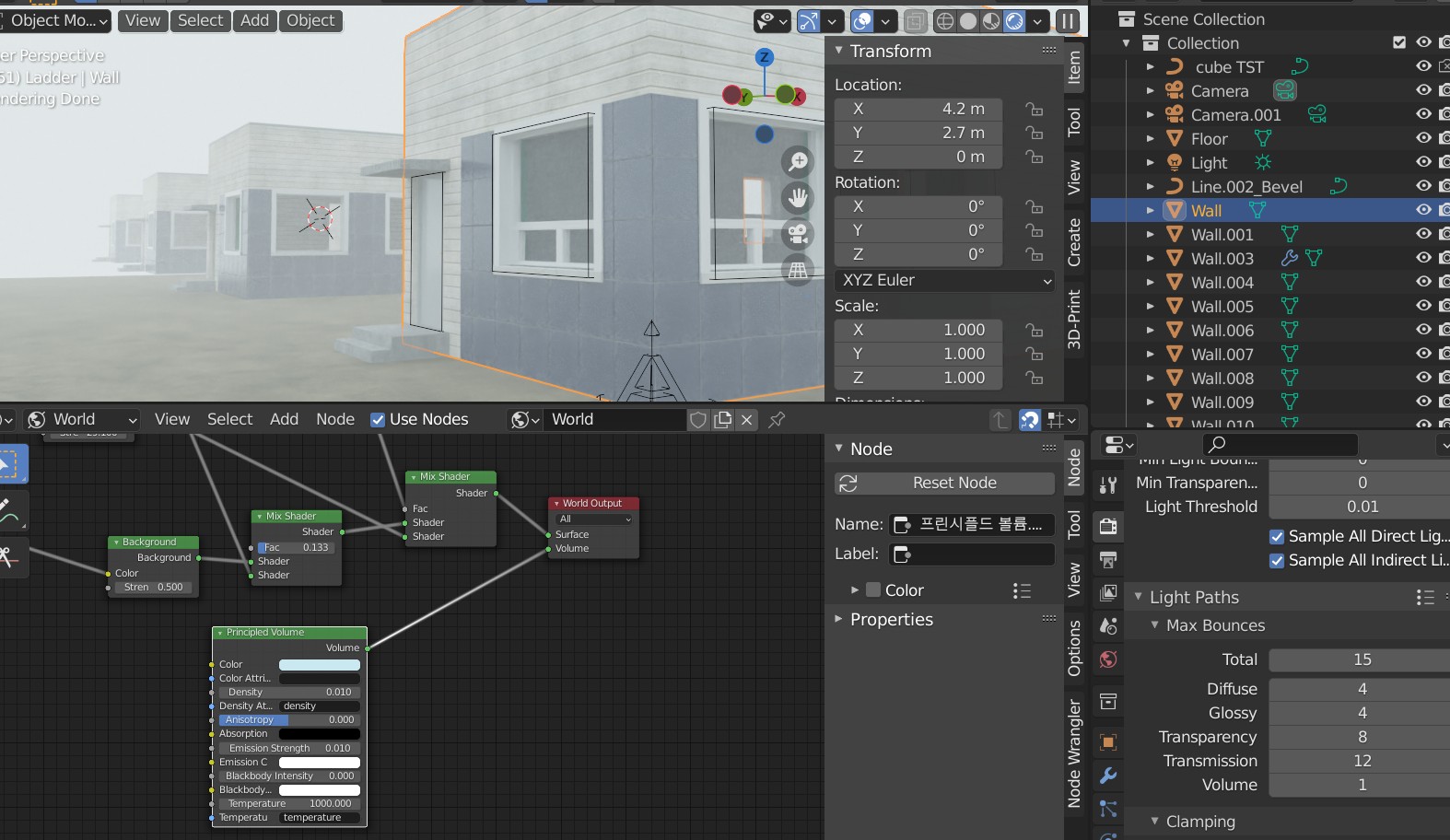 Increasing Max Bounces for Volume makes the fog a bit brighter.. less grayish.. This is with Volume scatter node applied to material of the solid (background and shadows still visible). 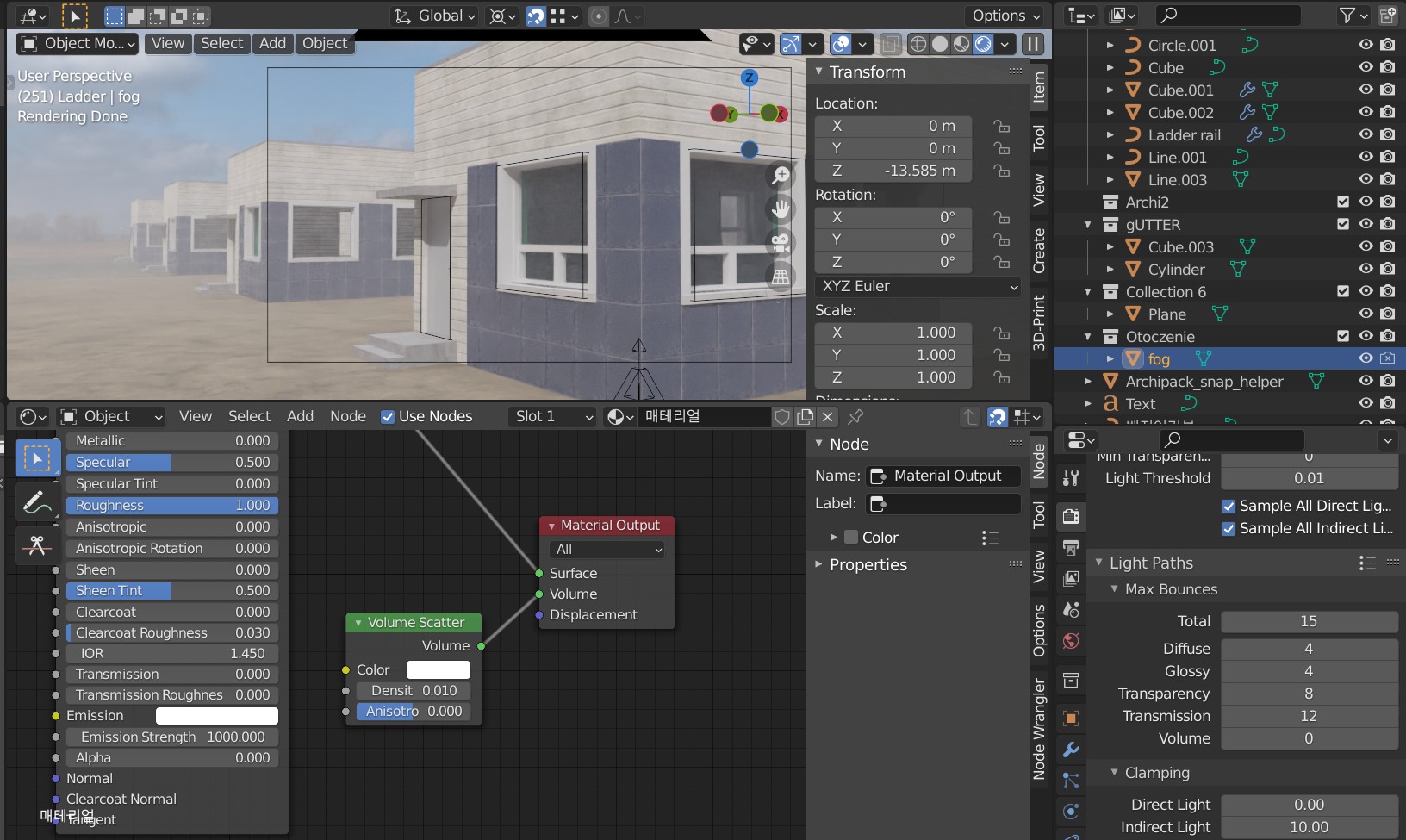 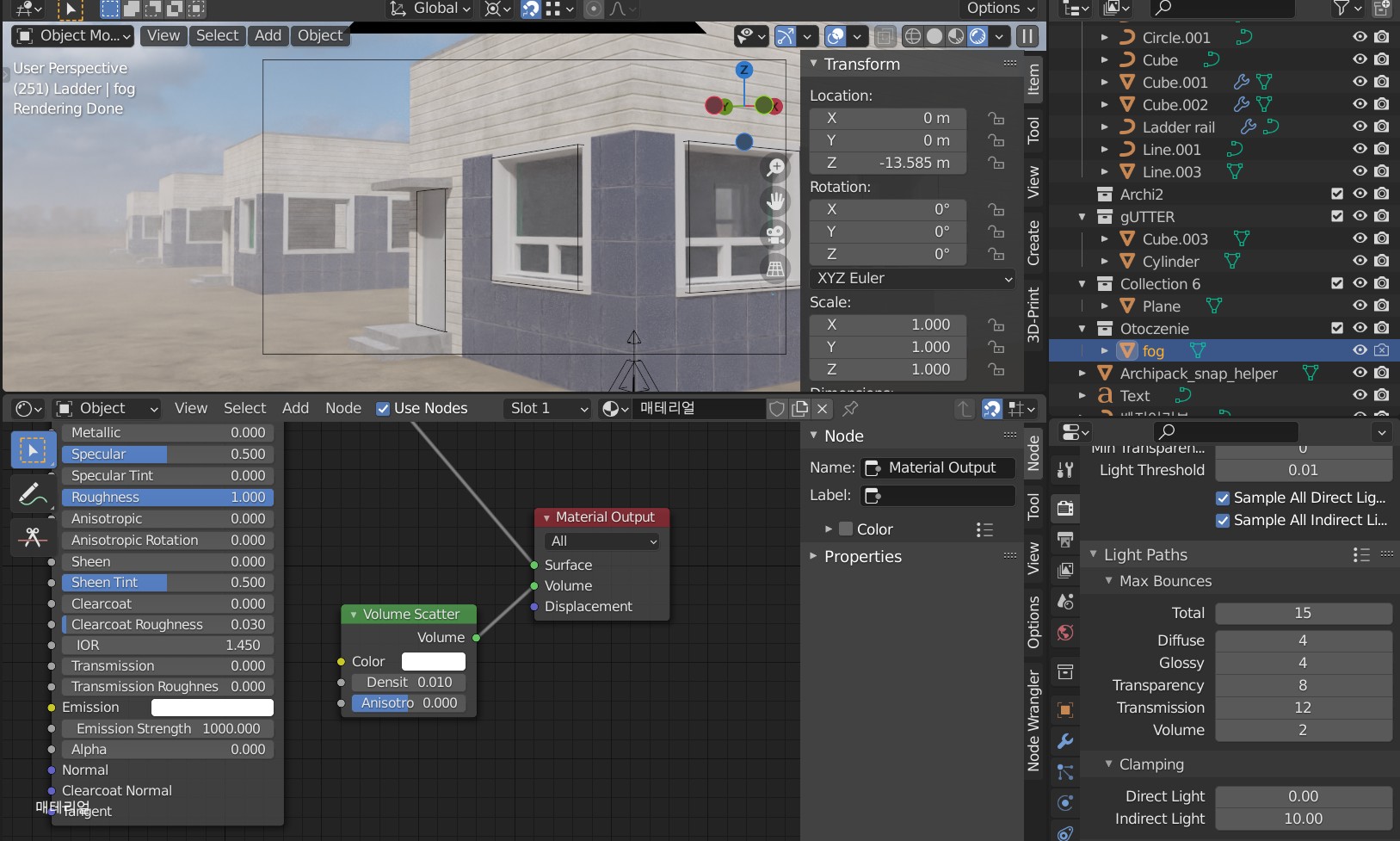 If the camera is inside of the solid, worlds volume scatter node didn't make any effect.. on those images with solid I still had Volume Scatter Node in world settings turned on.. It seems not to effect other Solids with scattering Volume..

1
Volumetrics not rendering/previewing in Cycles but working fine in Eevee
11
How to do volumetric lighting for a forest scene?
2
Softening the color of the line gradually

4
Volume Scatter goes Black
10
How to achieve white "fog" effect within an ice cube?
12
Emission: Red glow while the object itself is white
0
Rays emanating from a point on the surface
2
Control density of a volume in a more methodical way