How can I rotate a spherical texture without getting a distortion?

I've tried to search for tutorials but they all say I have to have a Texture Cordinate Node, attach the 'Generated' Output to a Mapping Node, and that one to my Image Texture, and in the Mapping Node to move the Z Rotation and it should work. However I'm getting this weird distortion effect. 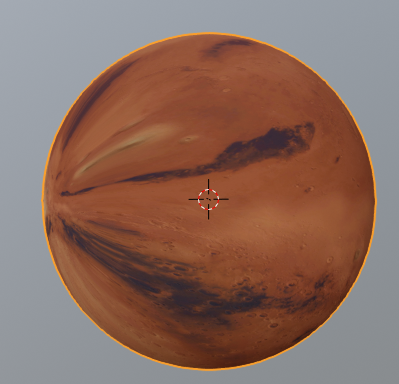 Any Idea what to do?

If that's a NASA mars projection, chances are it's an equirectangular, ie longs -180 to 180 mapped 0 to 1 in U and lats -90 to 90 0 to 1 in V. To make it rotate around the pole to pole axis increment, ie translate (not rotate) the U coordinate. The default uv sphere UV is pretty much the equirectangular projection.

Result with default UV map of default UV sphere. Rotating texture about axis by translating U

I'm not a big nodes guy, in theory could emulate the UV map using the object vector output and converting it into spherical coordinates with some math nodes.

Give that a go.

by placing the mapping node before the projection, can now rotate freely using use x, y, z rotation.

Please note: Using the object texture coordinate relies on the object being at location (0, 0, 0) and having origin at center of geometry for the above set up.

Much simpler using environment texture node as pointed out by @ISCREAM kevin deguisne https://blender.stackexchange.com/a/159521/15543 Have taken the liberty of making an image of the setup.

use the environment texture node and object coordinates , not UVs

Not the answer you're looking for? Browse other questions tagged texturing uv transform-orientation vector-mapping distort or ask your own question.

3
Mapping an Aitoff projection onto a sphere
2
Generating a UV map from object generated texture coordinates
3
Blender: Project a map on a sphere
1
Creating a UV Map from a shrinkwrapped sphere

4
Need to make (node setup) of realistic dirt/ grime/grunge on top of image texture of ceramic tiles
1
How does texture mapping work in Blender?
2
Randomize wave texture rotation
1
Rotate (generated) UVs of environment texture without mapping node
6
How to make a sine wave distortion effect?
2
Generating a UV map from object generated texture coordinates
2
How to apply custom lens distortion parameters to a rendered image?
2
What is the best way to procedurally texture an object without the hard edged seams I am getting?