I'm interested in creating a material that gives this end result: 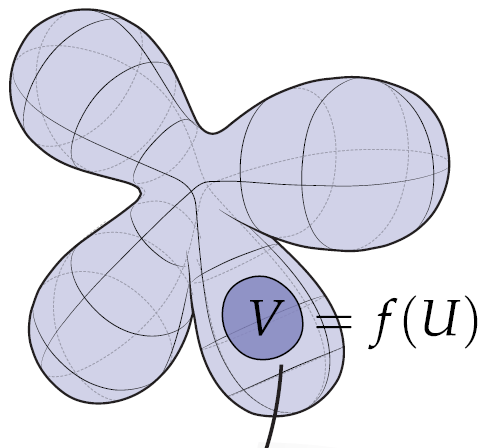 I'm studying the possibility to use Blender as a tool for scientific education in pure mathematics.

The idea is that the material should be:

In the long term, I would like to be able to draw small patches such as the "V" patch here. 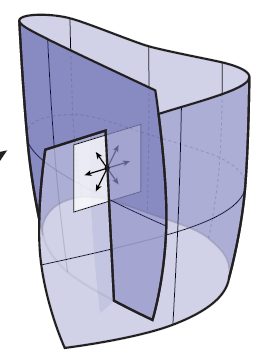 This can be accomplished by using Freestyle and Freestyle Edge Marks. 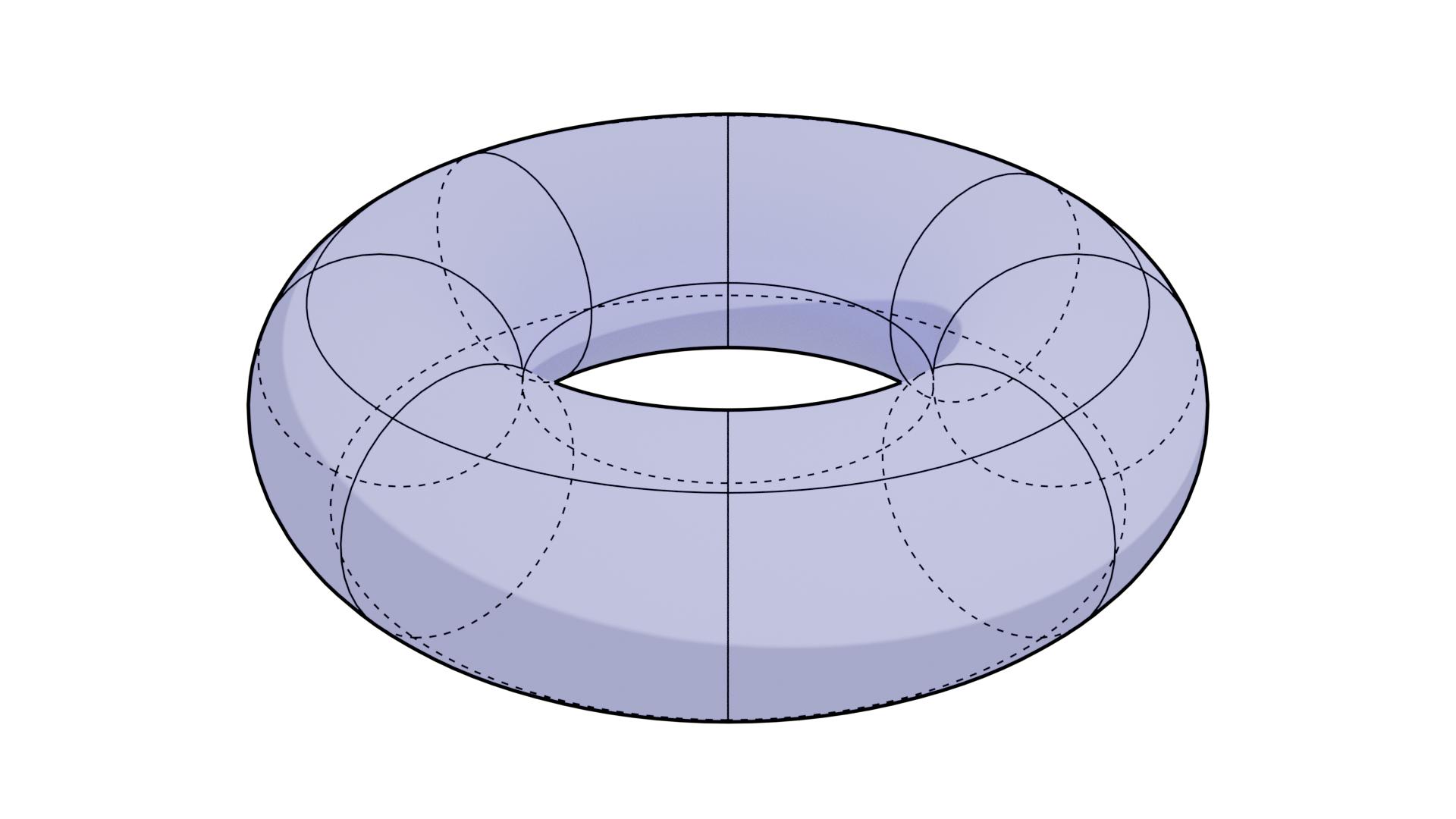 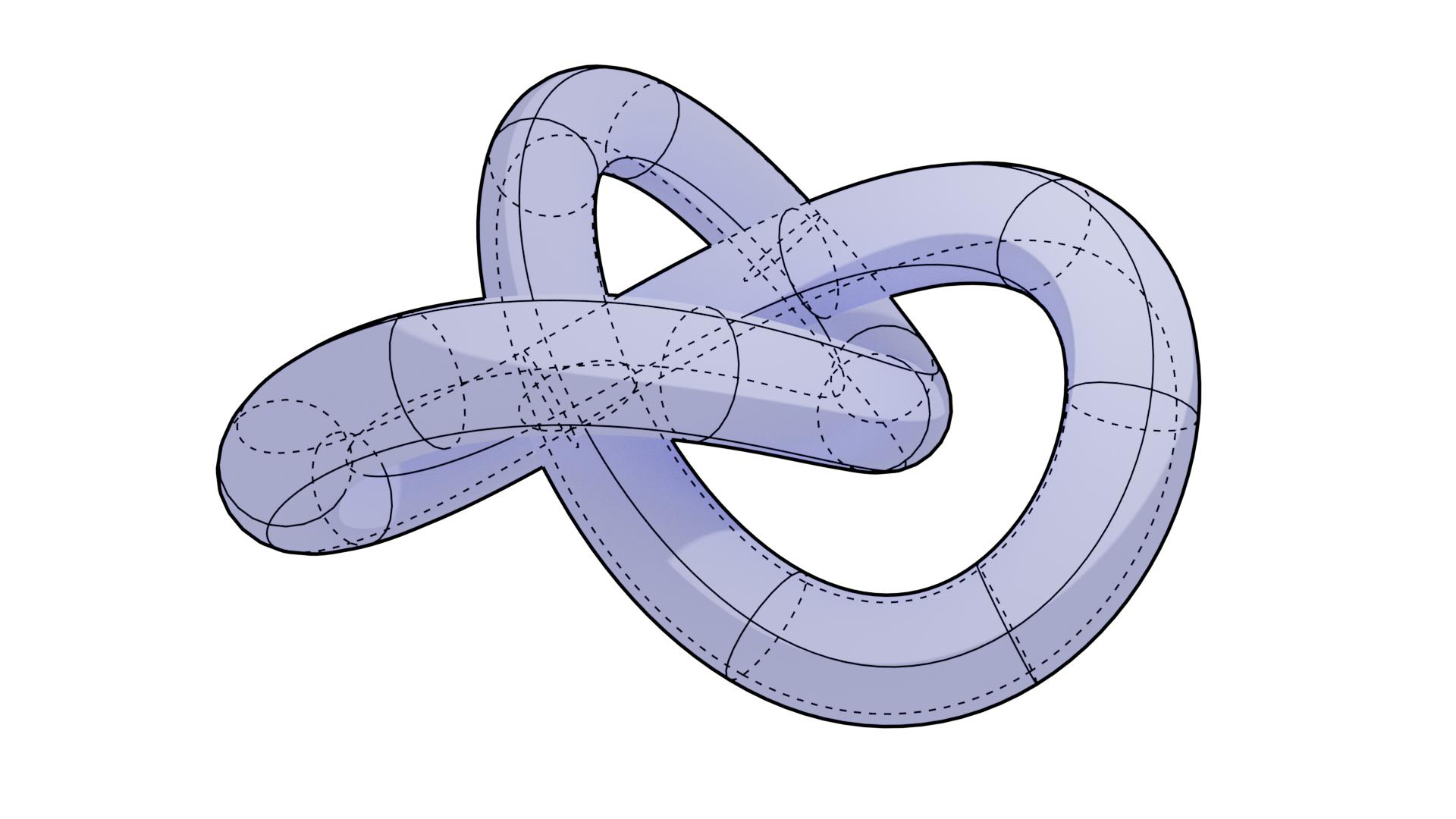 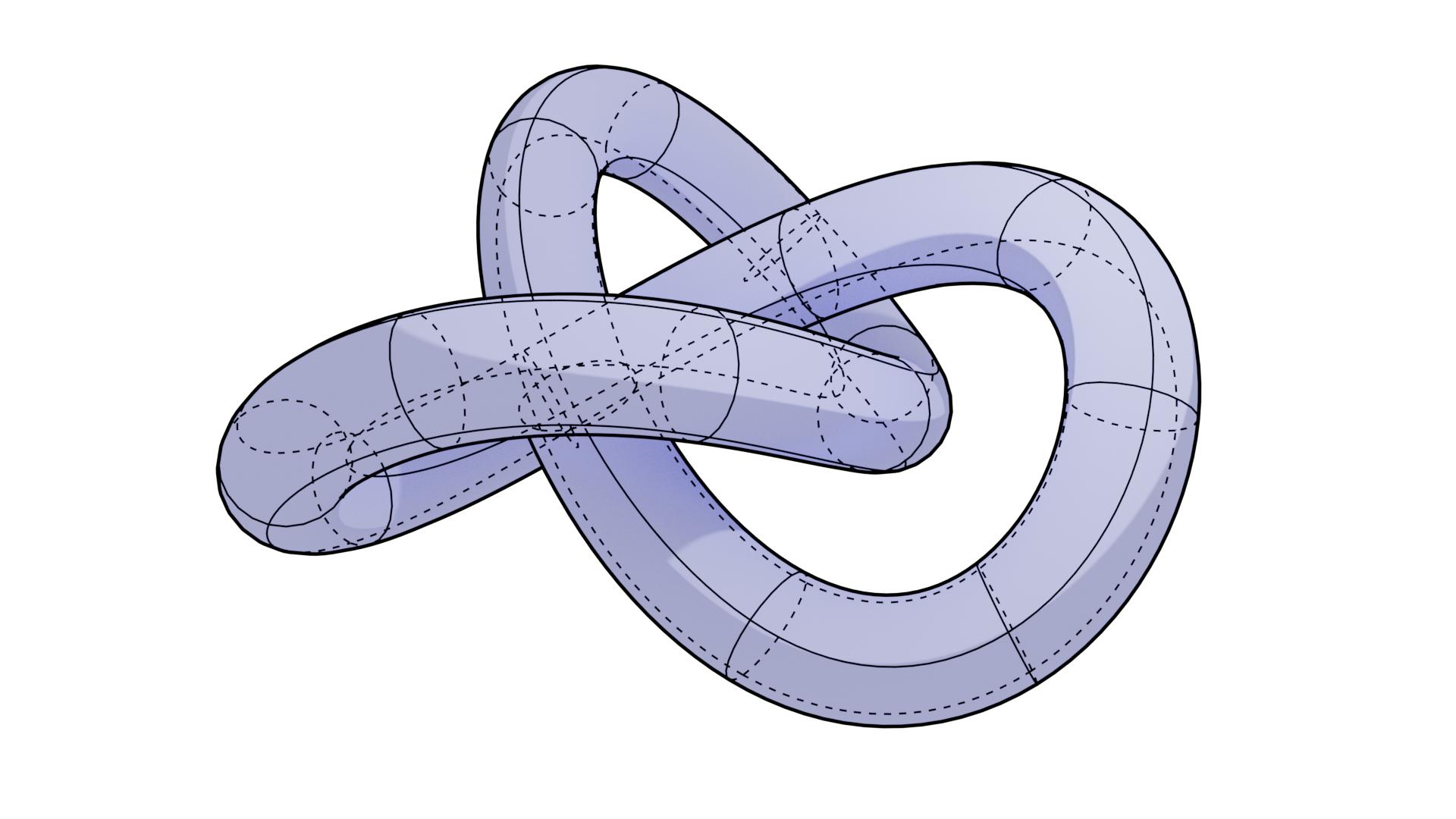 Assuming you already have a model that you would like to render using this style, select it and switch to edit mode (Tab). Deselect all vertices (Alt+A). 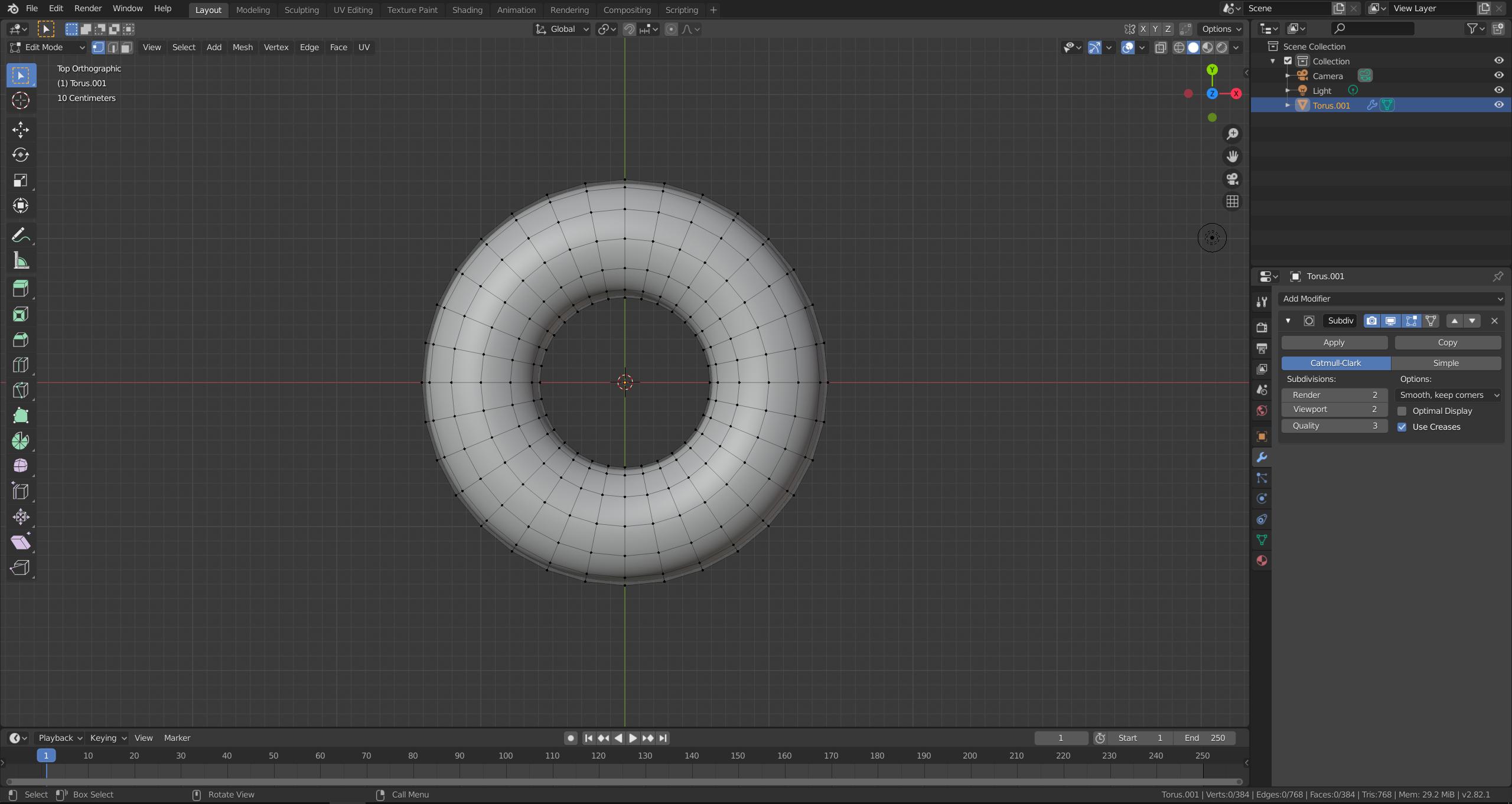 Next you need to select all edge loops that you should appear in the rendered image. Edge loops can be select by using the Shift+Alt+LMB shortcut (or RMB if your using right-click select). Once you have all the desired edge loops selected press Ctrl+E and select Mark Freestyle Edge. Alternatively you can use the menu Edge > Mark Freestyle Edge as well. 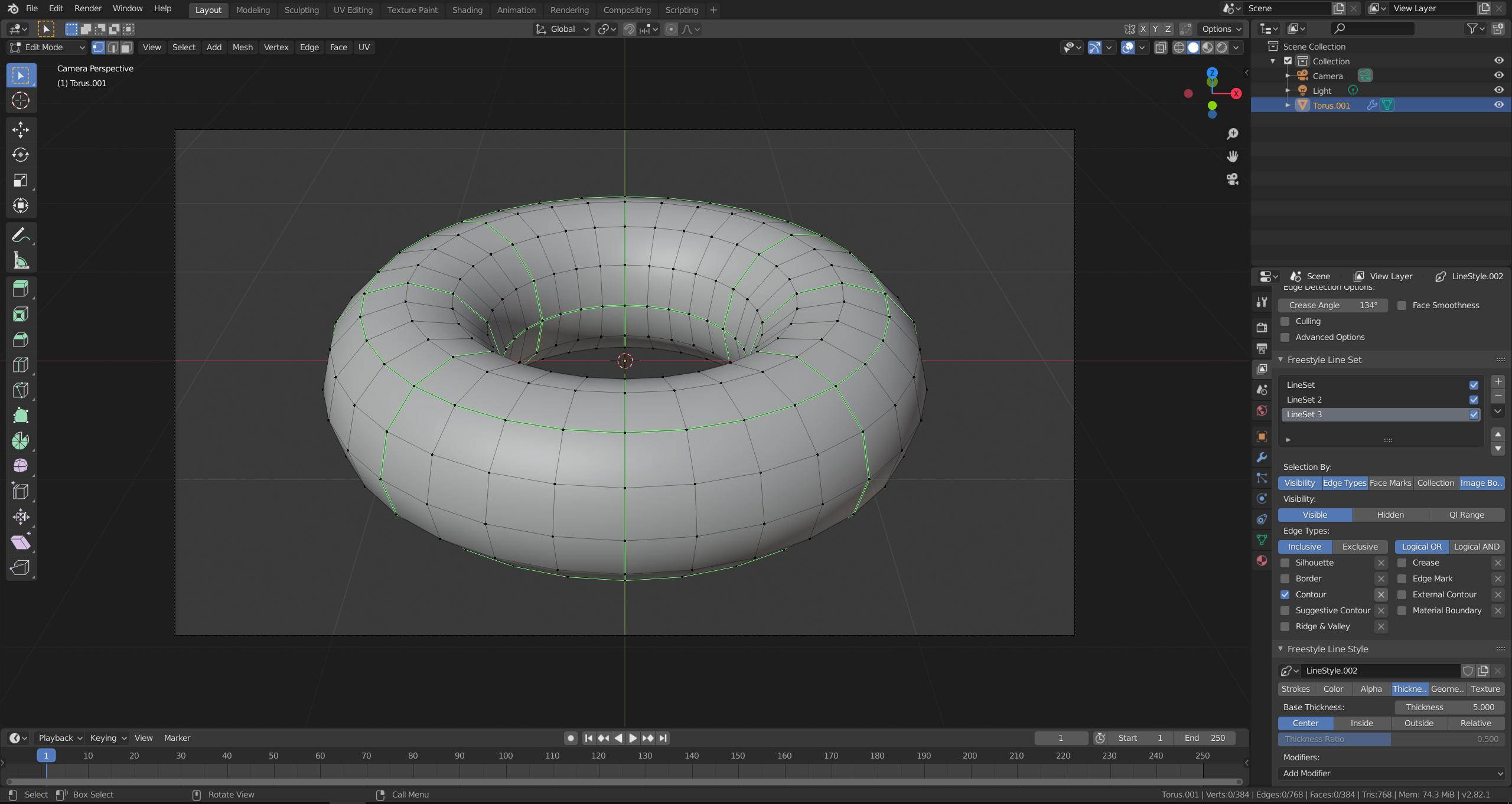 Enable Freestyle in the Render Properties. 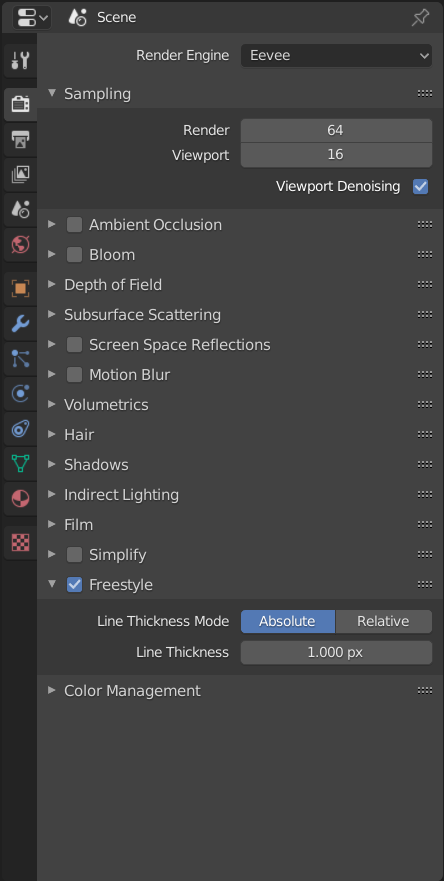 Switch to the View Layer Properties. First we are going to create the line set for the directly visible parts of the wireframe. Selection By should have Visibility and Edge Types enabled and Visibility should be set to Visible. The only edge type that should be enabled is Edge Mark. 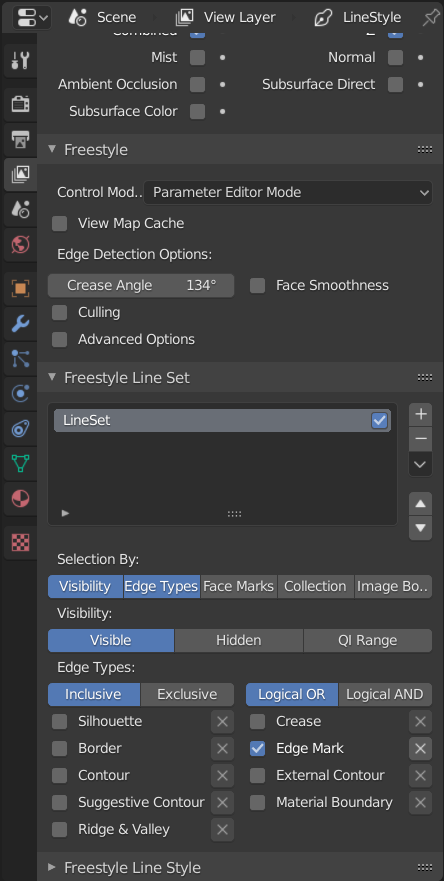 Create an new line set through the plus button and select it. This line set is for the dashed lines. Selection By should have Visibility and Edge Types enabled and Visibility should be set to Hidden. The only edge type that should be enabled is Edge Mark. In the Freestyle Line Style enable Dashed Line and give it the desired spacing. 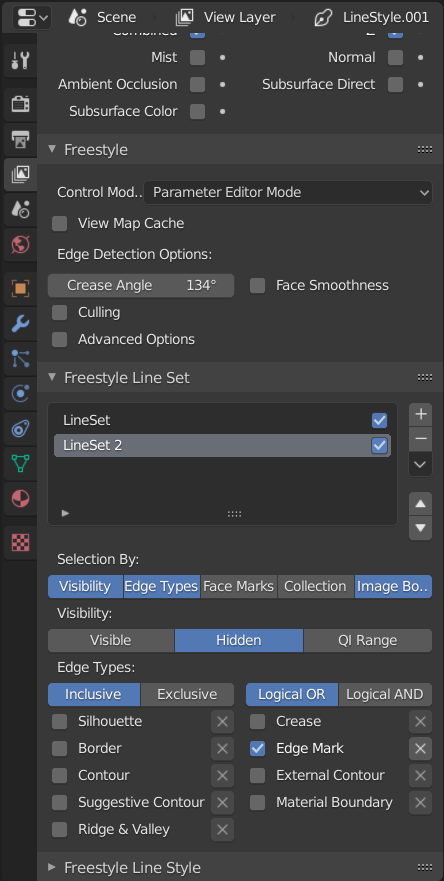 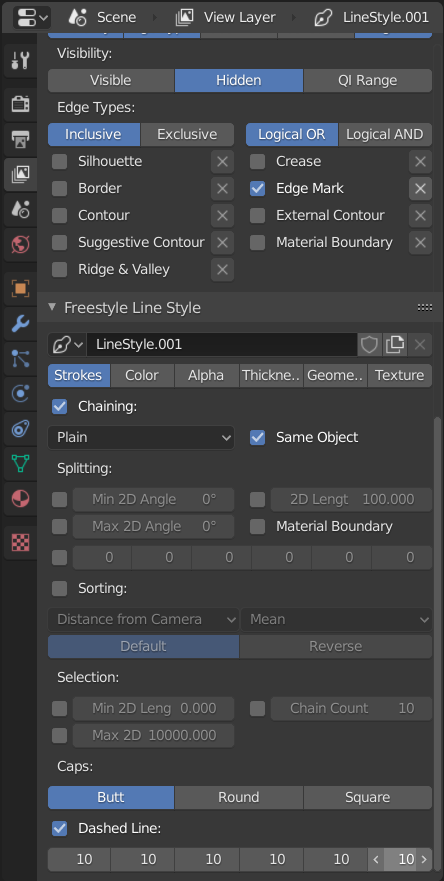 A third line set is needed for the contours of the object. Enable the Contour edge type for this line set. The Silhouette can be enabled as well, if you want the boundary between visible and hidden faces marked with an edge (See example at the beginning). You can give the line set a larger thickness in the Freestyle Line Style if you like. 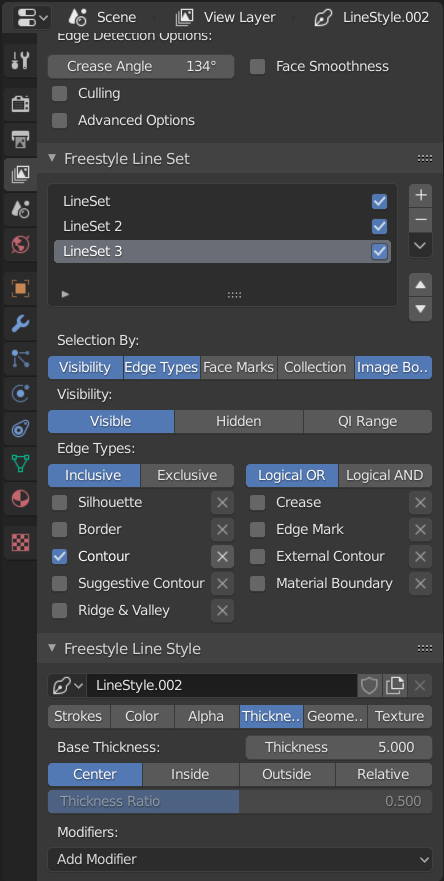 Now you can add a shader of your choice to your mesh, adjust lighting and camera position and you're done. In my example render I used the Toon Shader for Cycles, a single point light and Ambient Occlusion (World Properties). 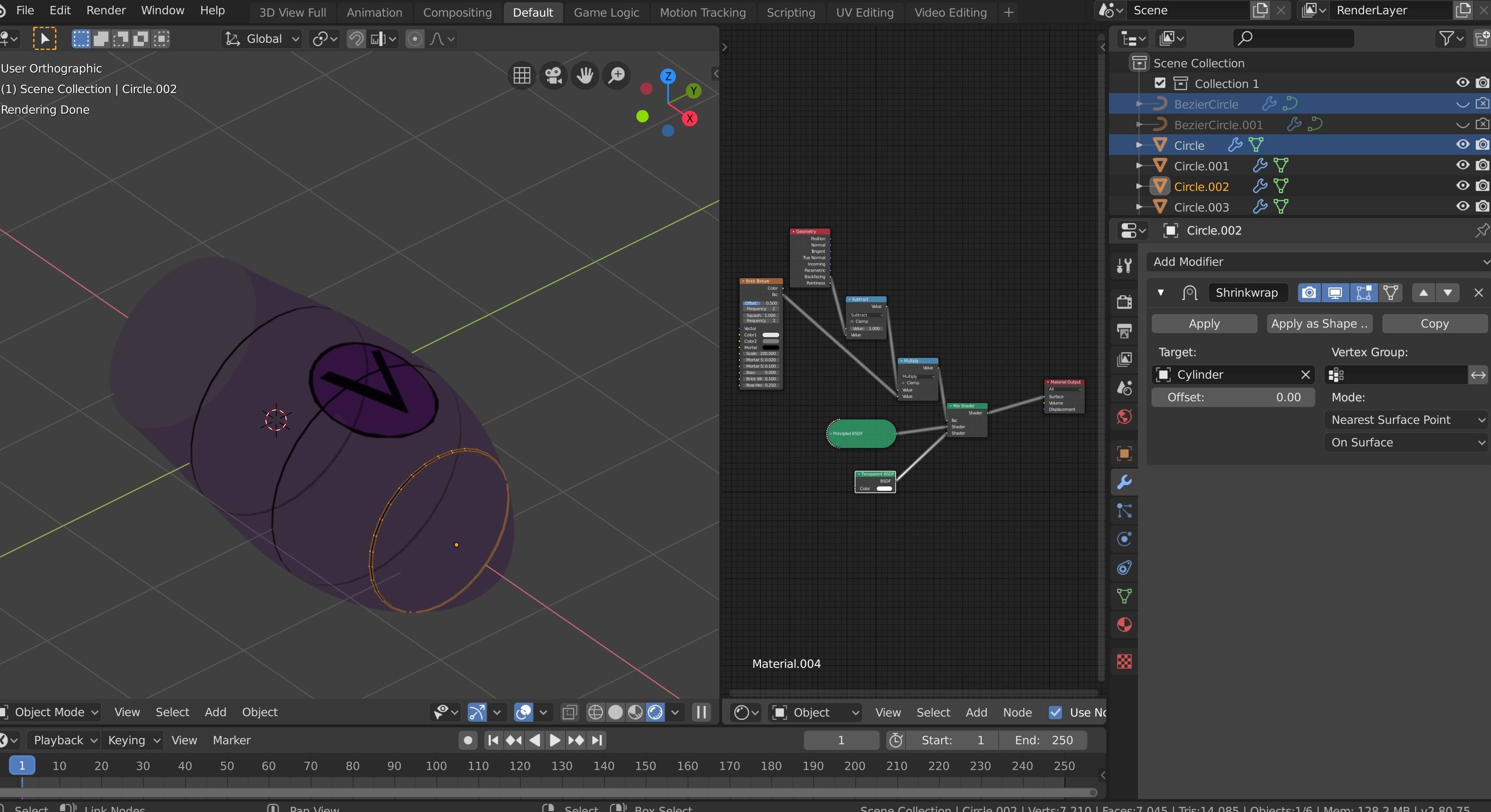 The most complicated pieces are:

[A] the Brick * Backfacing shader (shown above; the Hidden/collapsed Principled BSDF is just pure Black Diffuse) that I used to get a sort-of dotted-line effect on the faces of the contour lines that aren't currently facing us, and

[B] the gloopy manifold shape itself, which I made in this case by combining Cylinder and Rounded Cube primitives and re-scaling / vertex-smoothing the result a bit

Everything else is just a simple Transparent or Diffuse Shader, and some kind of primitive element (all Circles, in fact, except for the Text object that contains the V; the Contour lines are Circles extruded along the X axis slightly; the text circle is a Circle filled in with Grid Fill and then with a boundary created by extruding and scaling along normals) with a Shrinkwrap modifier on it.

Freestyle could be used to get a nice, somewhat thicker border on it: 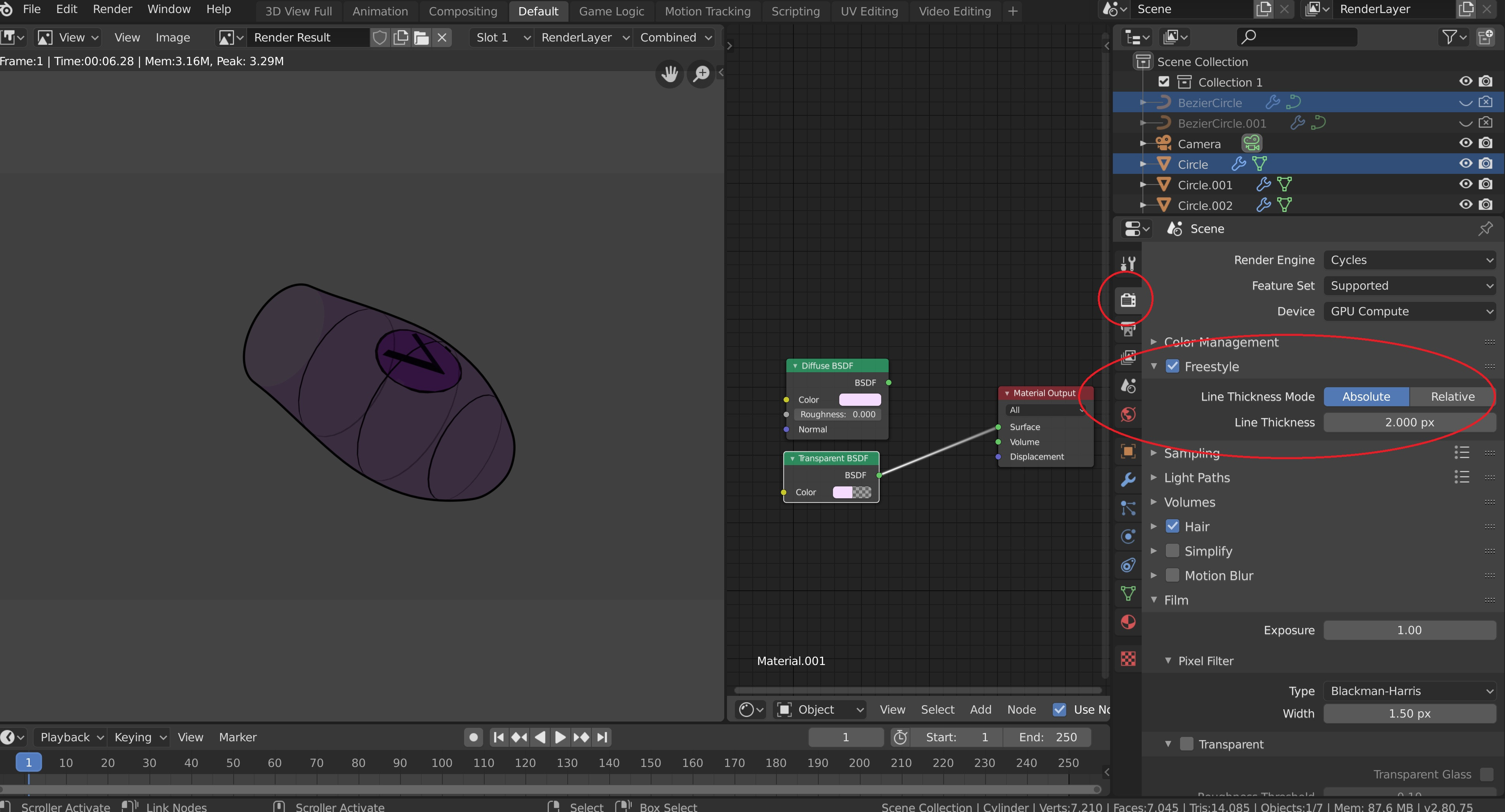 Freestyle only shows up at Render time, so as a limitation, this won't give you a real-time-viewing with boundary line (although with this simple scene Rendering only takes a few seconds).

I also considered two alternatives for getting boundaries:

Lastly, I originally considered an alternative approach: you might also be able to get good results with the Wireframe Modifier and Replace Original disabled (and then applying Transparent/Backfacing-Transparent shaders as appropriate to each object, and to the Wireframe's Material). That's the approach I started with, because it feels as if the Wireframe modifier was born to do this kind of thing, but the Wireframe modifier gives you Contour lines that correspond to your actual geometry, and as a result I found it generally created more contour lines than I wanted. An interesting alternative work-around might be to create a low-poly version of the desired manifold (with only the desired contour lines present), Wireframe that, and then Shrinkwrap it to the high-poly manifold object.

Not the answer you're looking for? Browse other questions tagged materials freestyle npr or ask your own question.

15
Automatically draw hidden portions of paths with dashed lines
7
How to change highlight color for icons in outliner panel
0
How do I use the Freestyle SVG Exporter to reproduce the examples in the documentation?
1
How can I achieve this inked sketch material?

0
Dashed lines (made with Freestyle) are rendering inconsistently