When I click the select icon, no drop down menu appears

I'm trying to get into Blender (I'm used to Maya) but after watching a tutorial where the guy clicks on that icon and a drop down window appears, I got really paranoid because it doesn't happen to me and I don't like that. I know that you can also toggle between the different select modes with W, but I just want my Blender to work properly. It doesn't work whether I'm in Object or Edit mode. I tried restarting and reinstalling Blender but that doesn't work.

Edit: Ah so you have to hold down the mouse button for a second before it appears okay. 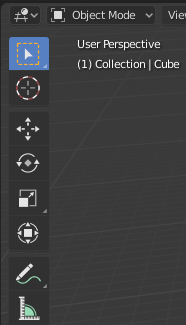 Browse other questions tagged error select or ask your own question.

2
shift alt left click for loop select doesn't work in 2.8 anymore. What did they change now?
1
When pressing A it doesnt select all 2.81
3
Why do vertices move when trying to box select?
0
Motion tracking always gives me error messages and acts unpredictably