Positioning a collection of objects along a curve

Is it possible to automatically position a collection of objects along a curve? For example, I have 100 cubes (all are different) and want to distribute them evenly along a Bezier Curve.

I searched for a way to do that, but only found how to use Array and Curve modifiers to repeat one object along a curve. This is not what I'm looking for since in my case all the objects already exists.

Even though I was able to get it to work with a particle system, it was pretty fiddly, so I think I have a better solution using a little scripting one-liner.

Make a backup of your blend file, in case something goes wrong.

Then, assuming your cubes are in a single collection called "Cubes", switch to the Scripting workspace and enter the following one-liner into the Python console:

The "3" here spaces the objects 3 meters apart along the x axis. Use whatever spacing is convenient to keep the objects separated. We'll adjust the final spacing later.

Now, we're going to create a mesh grid at the origin to control the cubes. Switch back to the Layout workspace, and feel free to hide or unhide the Cubes collection as necessary.

The idea is to have a triangle of points contained within each cube. It should look like this: 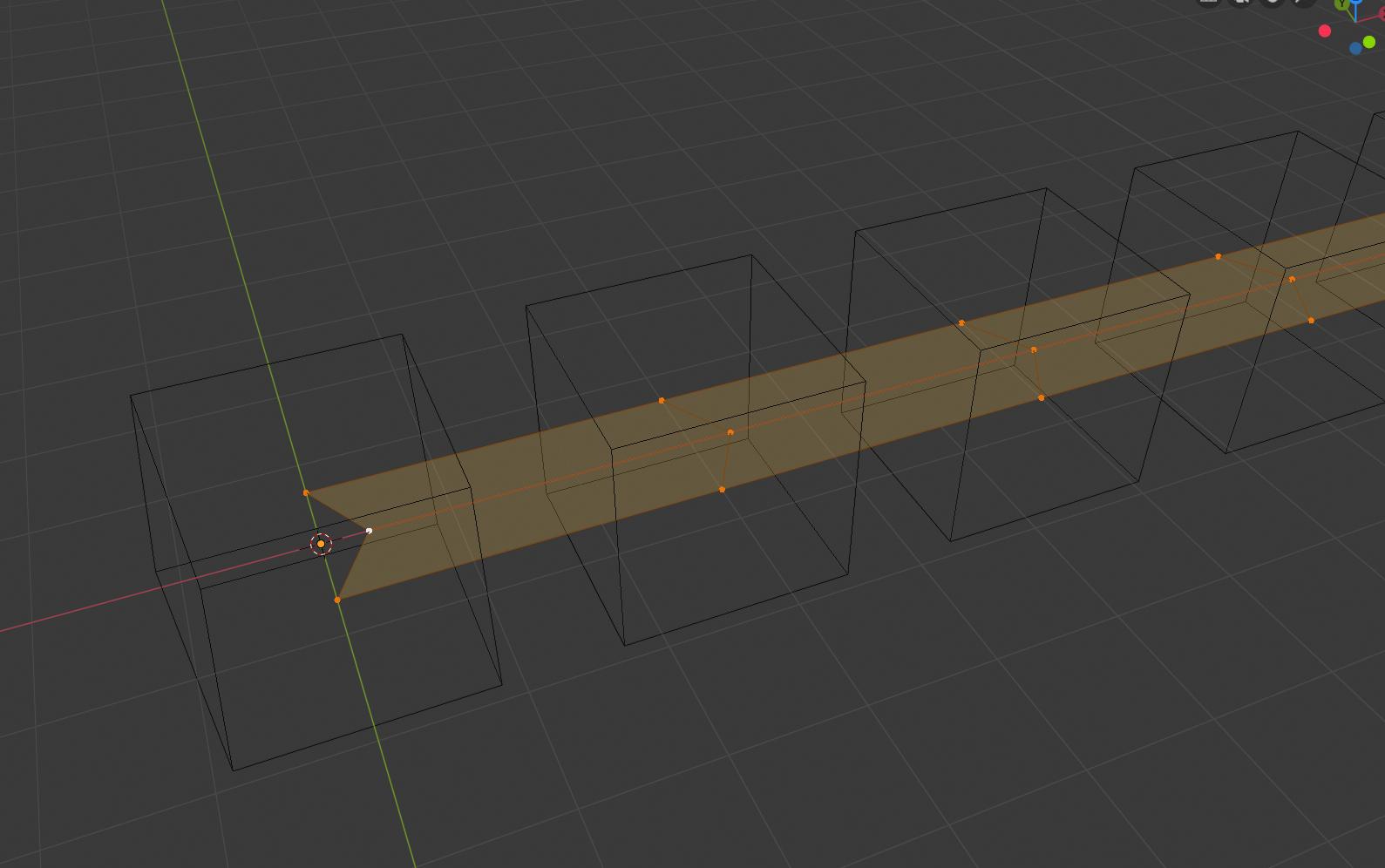 Now, back in object mode, select all the cubes, Shift-select the grid, and Ctrl-P Parent to Vertex Triangle. Each cube will be parented to the triangle of three points it's closest to which will control its position and orientation. Now, you can adjust the spacing by selecting the whole grid in edit mode and scaling it from the world origin pivot. (Note, scale in all dimensions, not just along the X axis, or the cubes will tend to twist.)

Finally, you can tie the grid to the curve in the usual manner. The most reliable method seems to be:

Now, the curve can be moved, rotated, and scaled in object mode, and the grid w/ cubes will follow along (in particular, the cubes will scale with the curve, so don't do per-axis scaling in object mode). In edit mode, the curve can be scaled without changing the size of the cubes (they'll slide along the curve to maintain spacing). To readjust the cube spacing (also without adjusting cube size), size the grid in edit mode. You may find it helpful to turn on the Edit Mode Display for the Curve modifier in the modifier tab.

Finally, if the cubes start to twist, note that you can edit the grid and pull just one of the three Y subdivisions forward or back to untwist them. Don't forget to turn off rendering of the grid or give it a transparent material or something.

Here's a 2.80 blend file that shows an example with 100 colored cubes.

I Think one way is to create a particle system from your curve object, then group all instances objects (your 100 cubes) in a new collection, last calls the collection from the render option panel in your particle system as instances (collection not single object).Finally play with the settings.If you need an advanced tool to do that try Animation Nodes addon, there are some video tutorials on instanced objects around.

Not the answer you're looking for? Browse other questions tagged editing bezier-curves or ask your own question.

4
Place/spawn objects along curve with randomized scale and rotation?
0
Multiple objects in array

1
Access points along a bezier curve
2
Duplicate object and scale across bezier curve
1
Curve path on sphere
9
Freestyle: control the Thickness of stroked curve using Radius?
0
How can I create irregularly apportioned vertices in regularly distributed vertices in a loop, without changing the loop?
1
Extrude multiple Shapes along the same Curve