I'm getting strange results on a smooth metallic flat surface. You can see it on the following screenshot. I'd expect the surface to be completely smooth, but it looks sort of like alligator skin or something :). Any idea what can cause it? 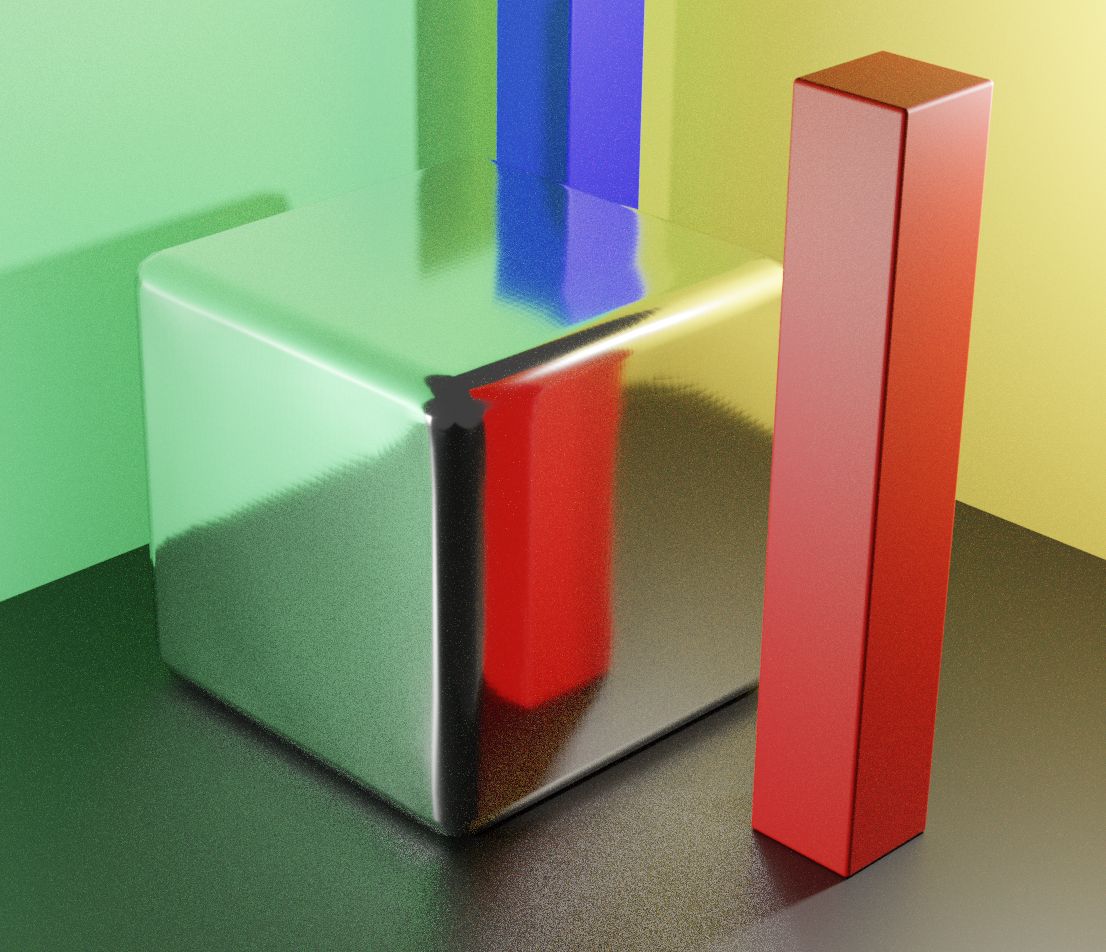 Things I did (roughly):

Here's how the meshes look: 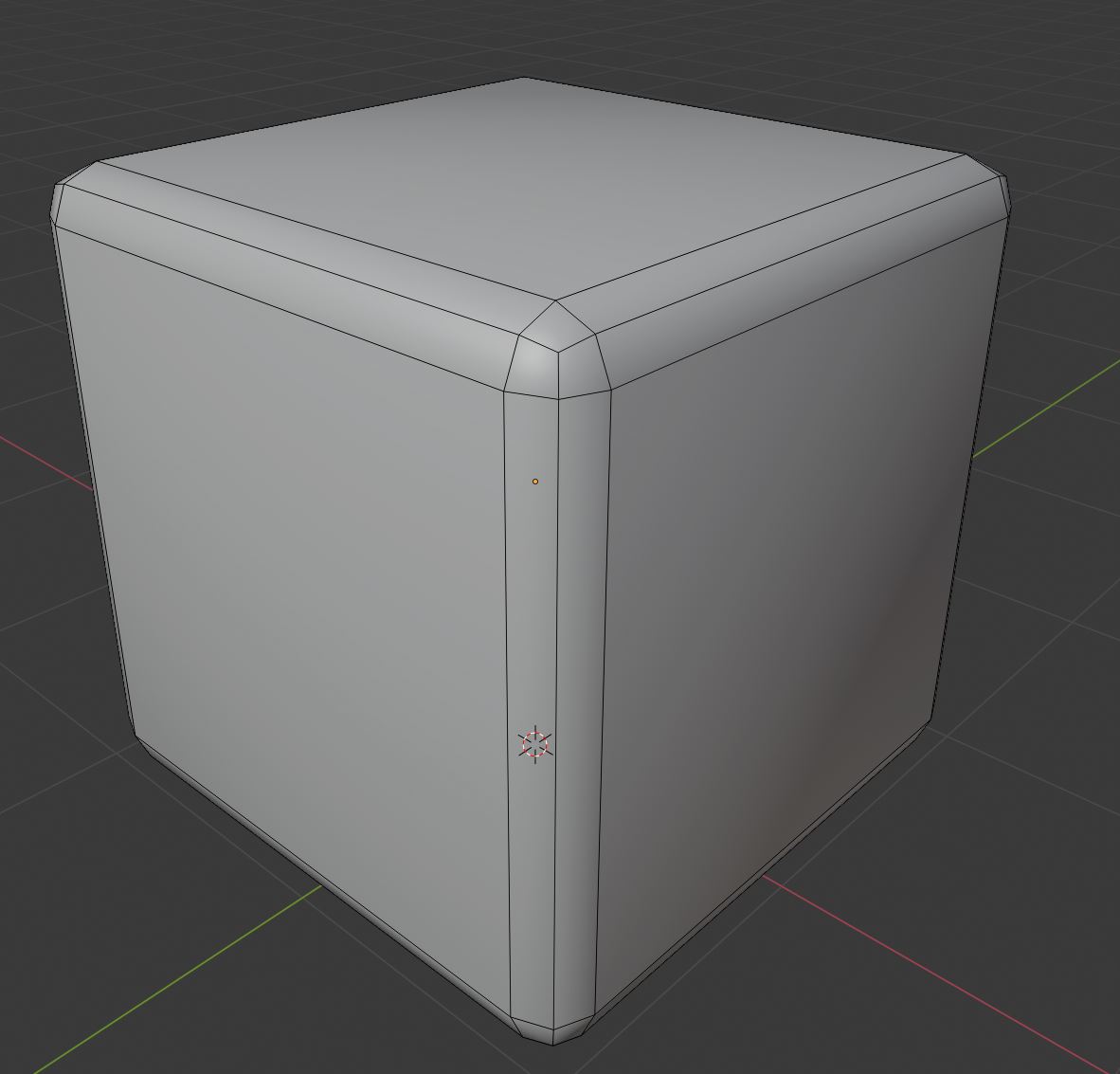 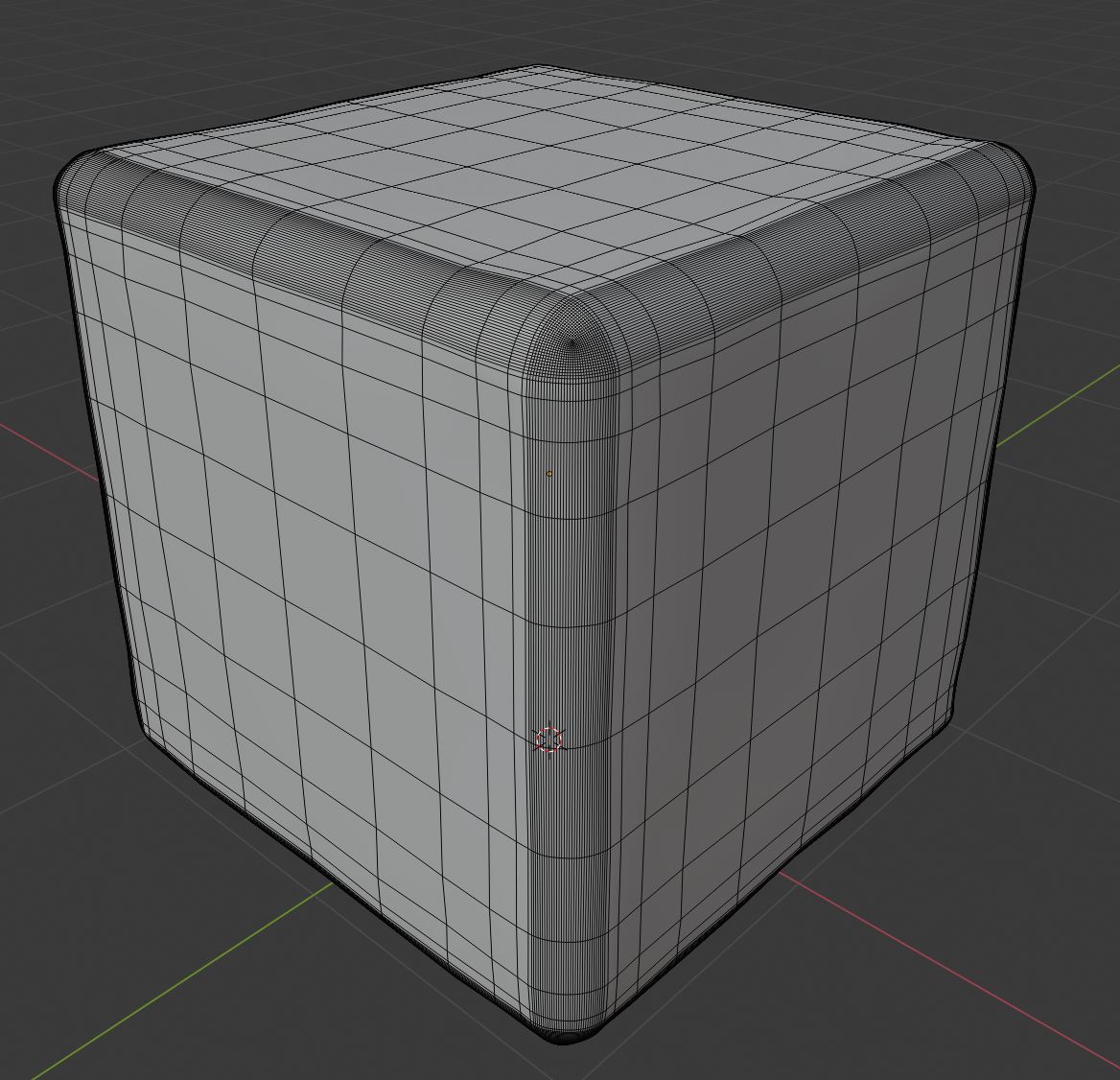 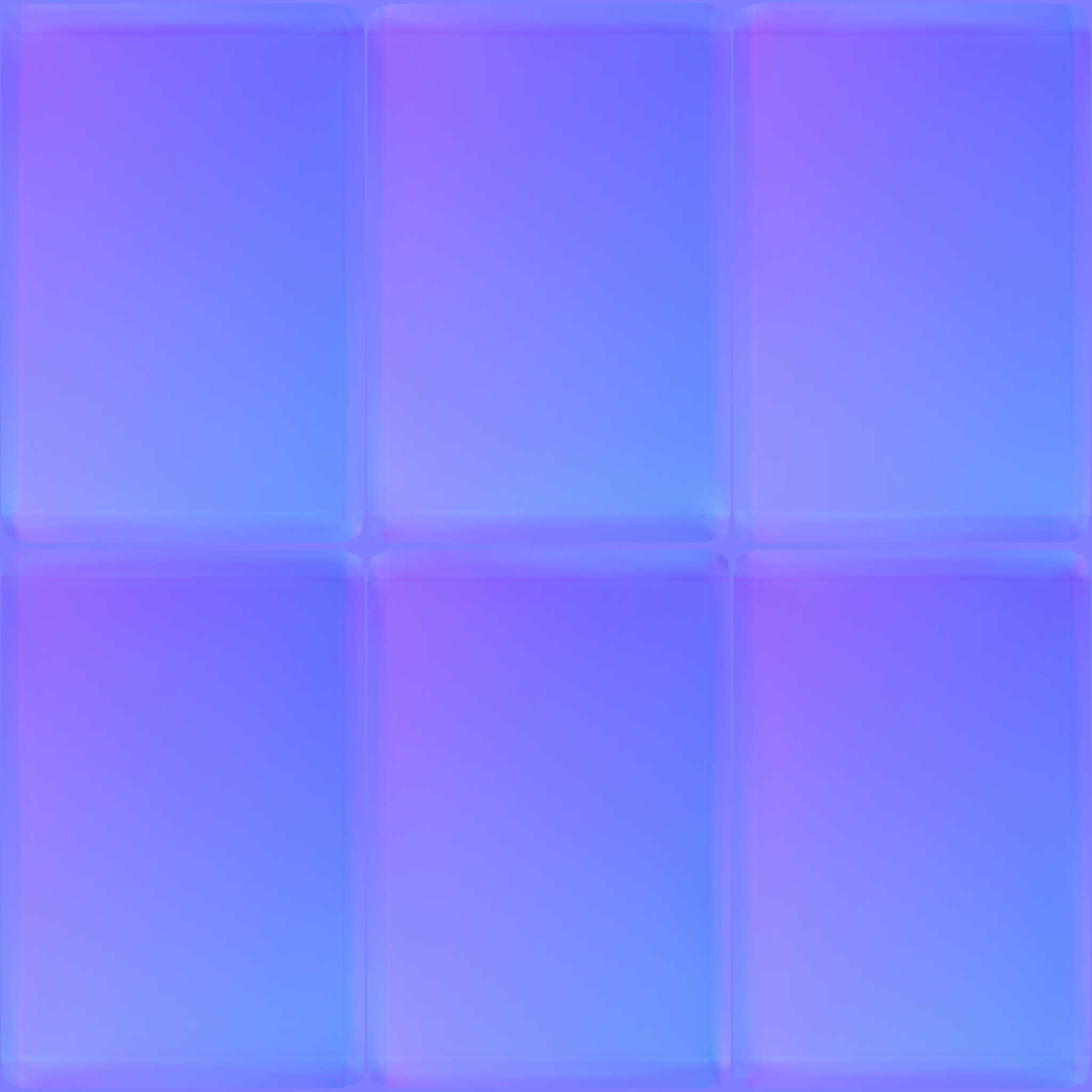 After attempting to UV unwrap the low-poly mesh according to hatinacat2000's answer below, I ended up with following normal map: 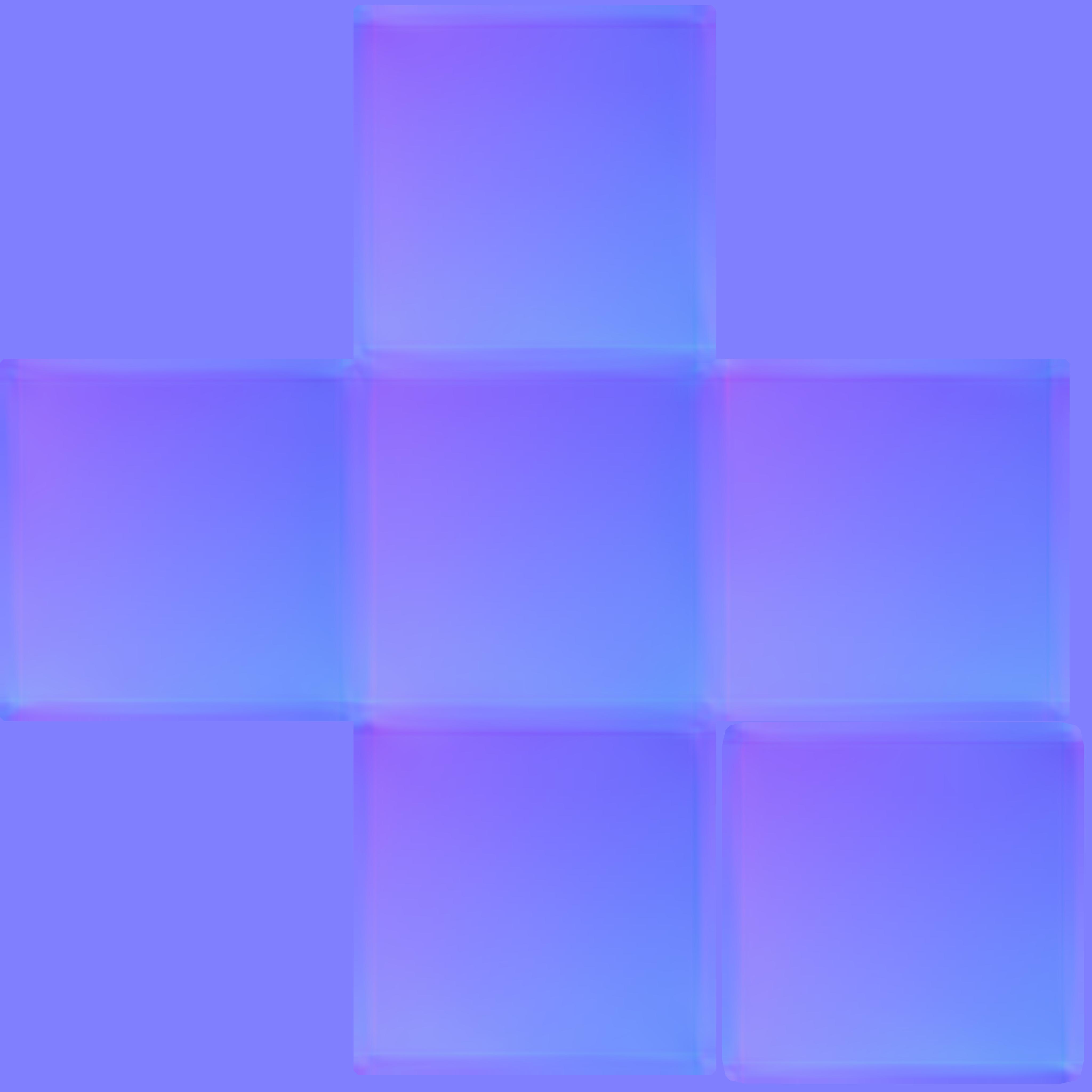 However, baking that in did not remove the weird effect. To be sure, I mean that the metallic cube looks like there's some transparent net spread over its sides, not the displacement which I applied intentionally on the hi-poly mesh, and it seems to work fine.

The problem is numerical error. 8 bits can't resolve the direction in a surface so sensitive to minute changes in angle. 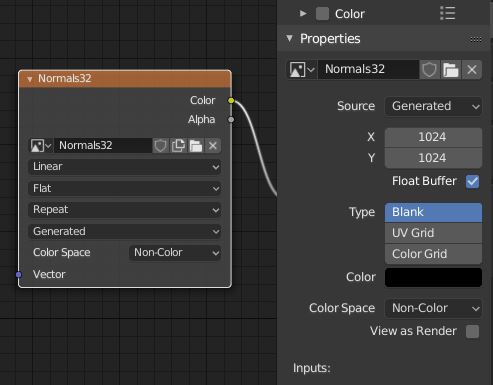 If you want to save the image out, 16-bit PNG will probably do.

You used "Smart UV Unwrap" which, for this object, is not taking care of distortion on the beveled faces. This is [probably] happening because you have not marked any seams for the object. Go into Edit mode, Edge Select mode, select edges you want to mark seams and do Edge->Mark Seam. All of that shown here:

After you have marked the seams, select all the faces and do UV->Cube Projection. This will project from each of the cardinal planes, with each "plane" of the beveled cube overlapping every other. Now shift-select the face which is in the middle of the largest island (that is, NOT walled-off by your seams) and do UV->Follow Active Quads. This unfolds and aligns the edges of all the faces connected to the active face in your selection (which is why you want to do this from a face whose UV-mapping is already straightened). Finally, move the disconnected island aside. All of that shown here:

You can now scale the islands together, uniformly, in the UV Edit viewport and move them into position. (not shown). Some distortion is unavoidable but it should now be minimal, erring towards symmetry and uniform face areas. Your normal map will work normally now :P but you will have to re-bake it for the new texture coordinates.

Not the answer you're looking for? Browse other questions tagged texture-baking normals normal-map artifacts or ask your own question.

1
How to bake normal map if the models intersect?
1
Blender (Cycles Render) Normal Map Baking goes wrong
0
Baked Normal Map Not Appearing on Mesh
0
Can normal map smooth hard edges?
0
Trying to smooth edges with normal map
4
when baking normals, do I have to set shading to smooth or flat for the low mesh?
2
How does normal map work?
3
Why doesn't the normal map hide the inaccuracies of the low poly model with smooth shading?