How could a gap between array modifier created objects be closed?

Repeating a segment of a tire with the Array Modifier along a curve creates a litte gap. 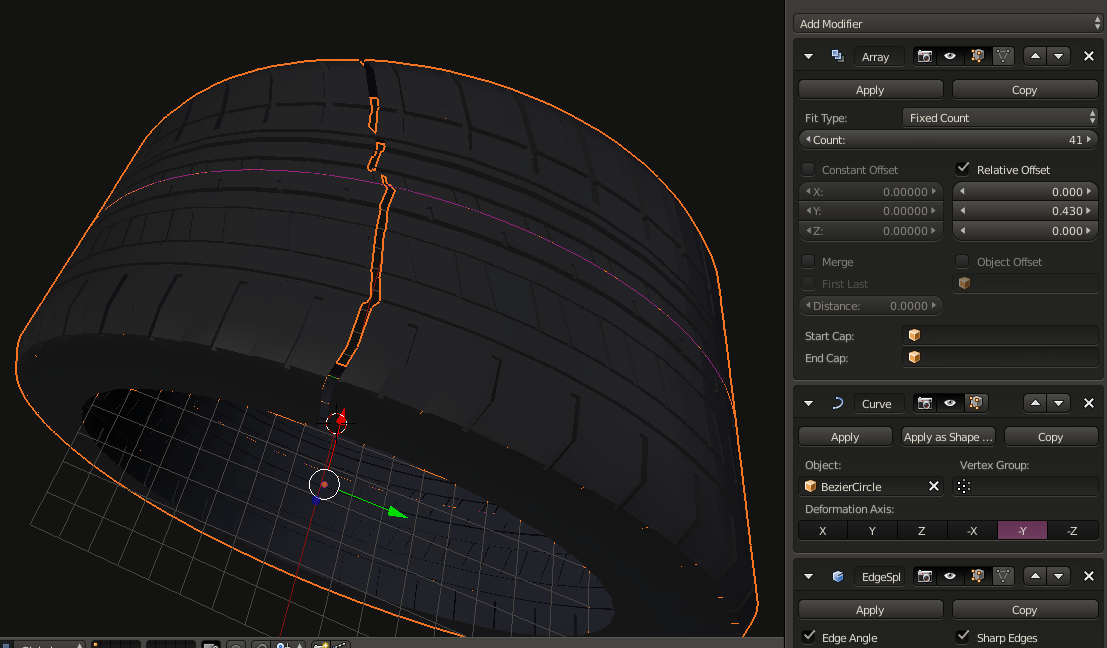 Are there other options besides changing the the Array Modifier's relative offset? (This would require manually adjustment of the mesh)

Merge + First Last will not affect anything to the gap in your case. Because: The reason that the first/last duplicate seem to be close is because of the Curve modifier, which affect AFTER the Array modifier.

You can try to first minimize the gap by adjusting in Array modifier, then go to the Edit mode of either the unit piece or the curve, S to scale, drag mouse while holding Shift to enable the very fine presision on scale, and zoom in the view, toggle Display modifier in Edit mode and Adjust edit cage to modifier result on all modifiers (the last two icons in every modifier panel). This would be helpful to see the result directly and simutaneously. Zoom in further, then scale again... repeat above steps (if necessary) until the gap is hardly noticed.

Another way to get rid of the gap by Merge is using Object Offset feature:

About how to use it, I recommend to see this simple guide from CGCookie.com.

Not the answer you're looking for? Browse other questions tagged modeling mesh bezier-curves modifiers or ask your own question.

3
How do I correct my curve deformed array?
1
How can I merge the last elements of an Array that fits a curve?
2
Shading Issues with the Array Modifier
2
Array modifier linear scale
0
Gap between objects created using array modifier objects
3
mesh array modifier with simple deform taper and curve modifier
2
Merging an array of paths to be used as a curve deformer