Here is a simple nodeTree that rotates a cube around Z axis. Can it be easily changed so that we could explicitly control the rotation speed instead of the angle of rotation? 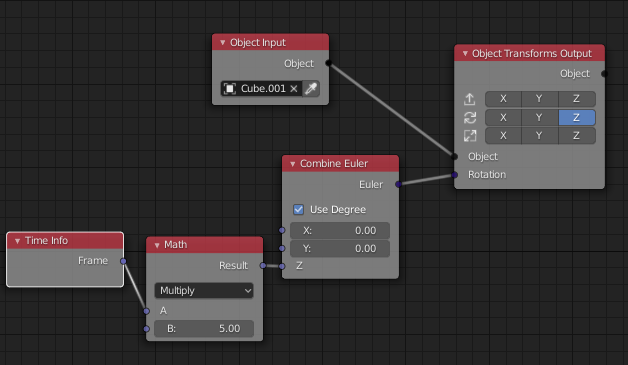 TL;DR: The B value in your Math node does that.

Your current node setup is quite simple: It picks up the current frame, multiplies it by B, and sets the result as your object's Z rotation value.

If you think of it, the "speed" in which your objects rotate is basically B for each frame. Depending on your animation's frame rate, you can get easily a value per second.

Now if you want an explicit representation of that in your node tree, it's simple, you just have to make so that you give how mutch degree per second you want and it divides it automatically by you animation's FPS and sends the result to your B value.

Unfortunately, I can't find a way to make it automatically pick up what's used as frame rate in your scene settings so you will have to set it manually. But here's the result:

Notice you can add label to your nodes by selecting them and opening the sidebar with N.

For animating values through time in animation nodes, see this post.

8
How to create keyframes for Animation Nodes, which I can see in dope sheet?