Then, let's say I select the cube with right mouse button, and go to Object / Group / Create New Group, and confirm the name "Group" in the "Create New Menu" bar with [Enter]. The selection outline turns green, meaning it's a group "master" (as far as I can see).

Now, let's say I press Shift-A; and choose "Group Instance" > "Group", and set the new instance to Z=2.3; with all selected, the view looks something like this: 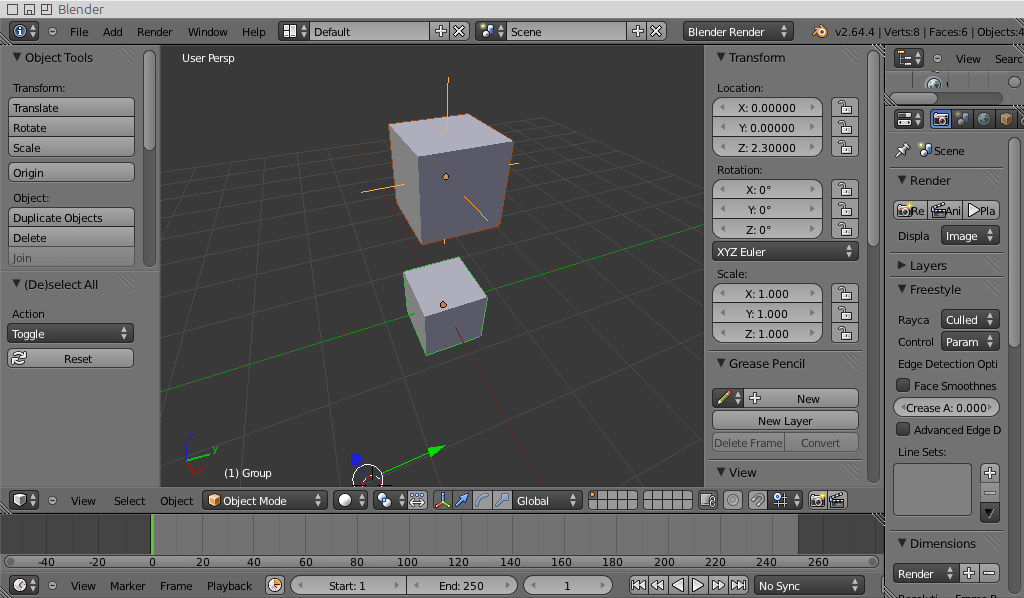 Now, let's say I deselect all with A, then select the group master with right-click; and let's say I move it to Y=-2; then the result is: 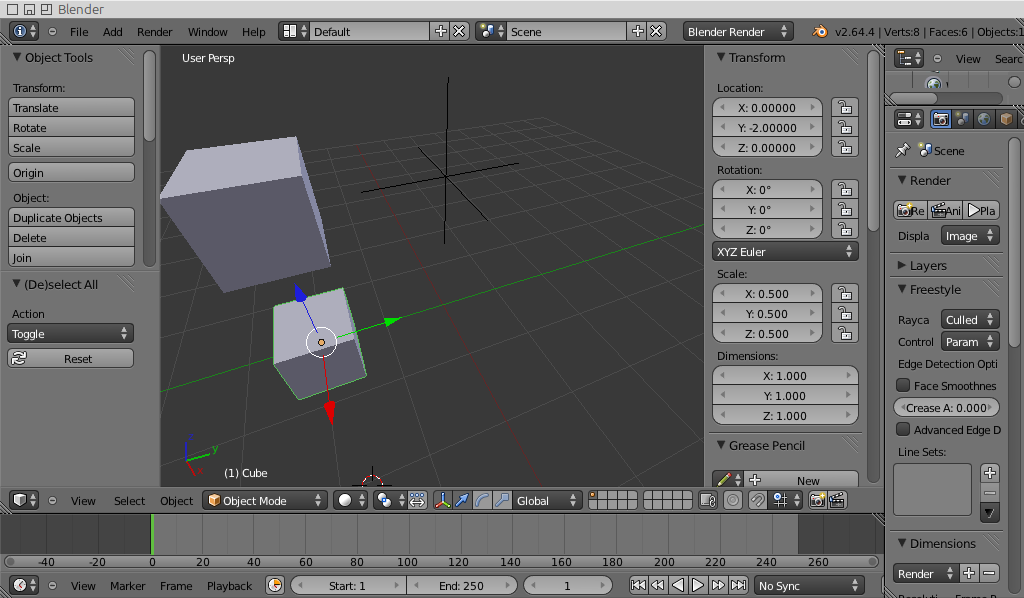 Creating a group-instance is a different thing from creating a linked duplicate. When you create a linked duplicate, the object data is shared between the two objects, but each object can be transformed or changed with modifiers without affecting the other. 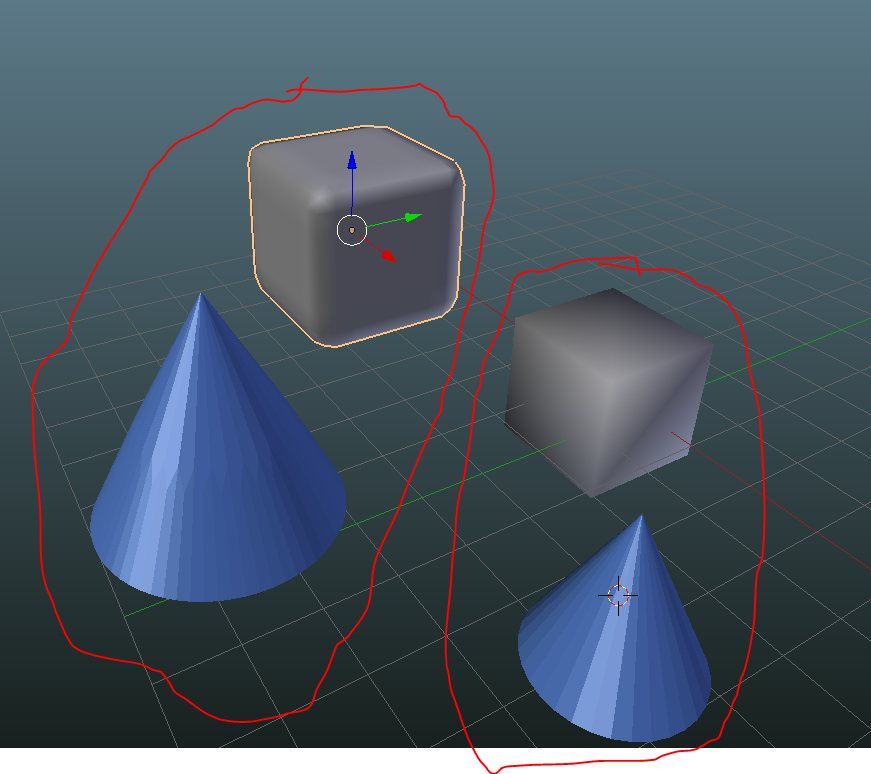 group instances, on the other hand inherit all of the geometry and data characteristics of their defining group of objects and also inherit their transforms with respect to the scene origin, not the group objects center. The empty of the group instance acts as an additional displacement gizmo so that you can transform the instance, but moving the parent objects in the global coordinate system will propagate that change to the group instances.

Unfortunately, there's no such thing as a group origin-even a temporary one, so you can't produce a group instance that doesn't behave this way. Programs like AutoCAD have what are called 'blocks' which are collections of entities with a local coordinate system so that you can instance and transform them. AutoCAD stores block data in a non-graphical part of its and replaces the defining geoemtry with an instance of the block.

You acheive this same effect in blender by creating a group in a seperate blend file and then instancing it in your scene. It's not always convenient to have a file link between a group definition and an instance of the group, so what I've generally done is assign my grouped objects to a layer that's turned off or create them in a new scene and then use instances everywhere in the layout scene. 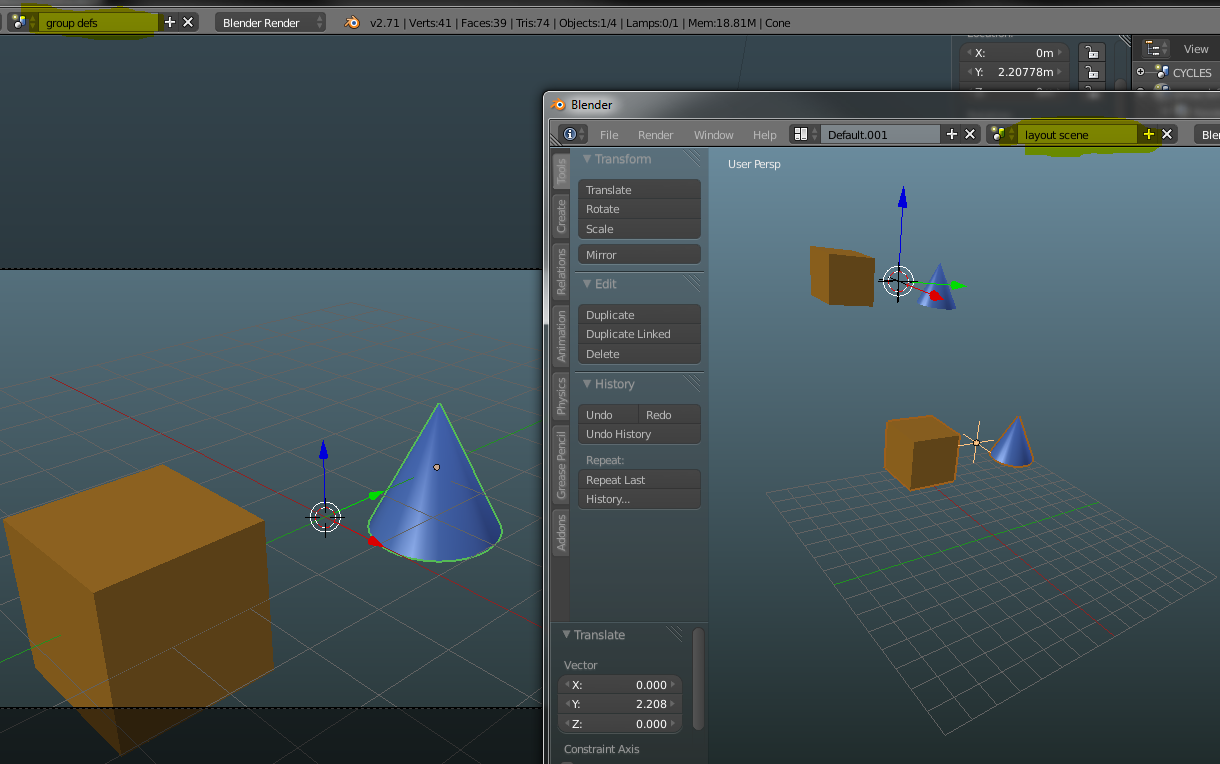 Not the answer you're looking for? Browse other questions tagged groups or ask your own question.

1
Empty for a group instance is far away from the group
0
Change Group Pivot Point
1
Group instance: move source group

1
Why are instances of duplicated groups linked
1
No material on objects in linked group?
0
Move group instances together after rotation
1
Why does Blender crash when I append this group?
0
Real-time symmetrical modeling with distinct objects in Blender
0
Size still the same after removing groups