Glow with depth in Blender?

What would be a way to create a glow in Blender. For that purpose I've been always using the compositor. However, that is pixels work, which means it is a 2d work. To make a 3d one, do I have to use particles, nodes or maybe some simulator? Because the compositor deals with images, which will make the glow to be out of perspective (flat). is there a way to make a glow with depth in Blender? Here is what I mean (If we assume that the blue color is a glow, it is clear that like other objects it is part of the perspective of the 3d view, which means that it has depth) - 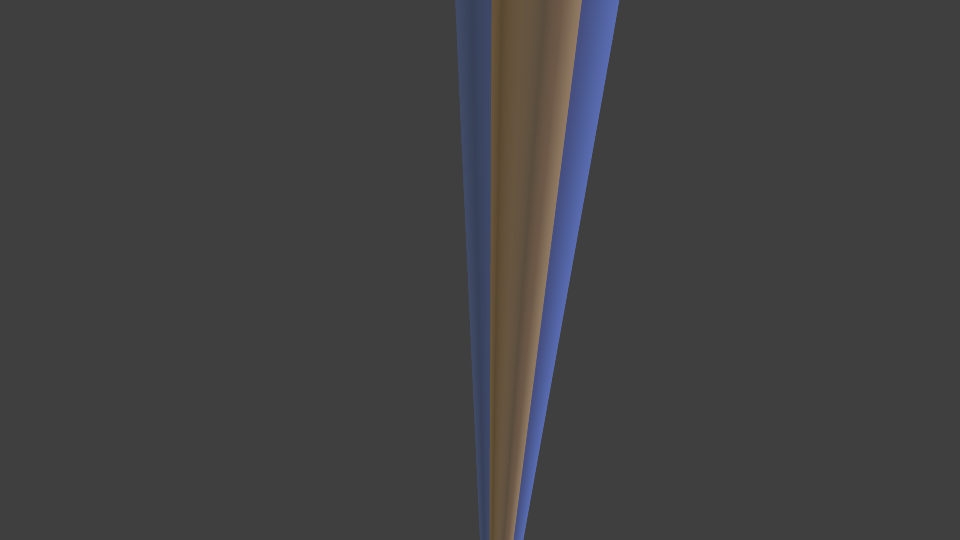 And if possible, how to make one in cycles?

Why would there be a glow around bright objects?

If the air is clean and transparent the light travels right through it, with no scattering and there is no glow around light sources or bright objects. 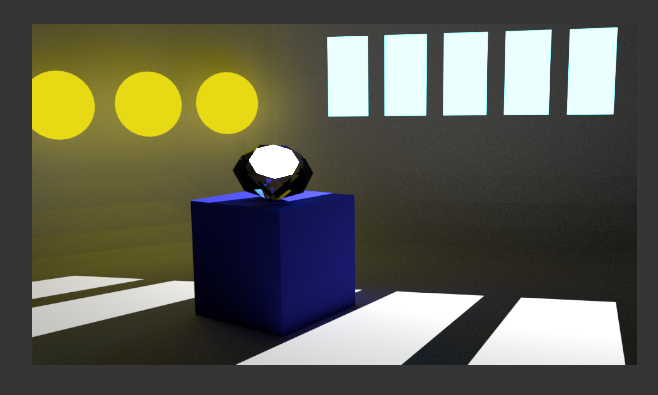 If there are particles floating in the air, those would get lit by the light source, light gets scattered, hence the perceived glow (think of a foggy night or the smog on a city)

With glass is the same thing: Clean and high quality glass would produce a non significant halo/glow around bright objects, the light would pass through it with very little dispersion. A dirty, scratched or humid glass would show the bright parts of an image with blurred edges caused by dispersion on the surface or the thickness of the glass itself (think a fogged or dirty window, or even a low quality or scratched camera lens)

So how do you create a glow then?

You can use volumetrics and procedural gradient textures to create a glow effect: 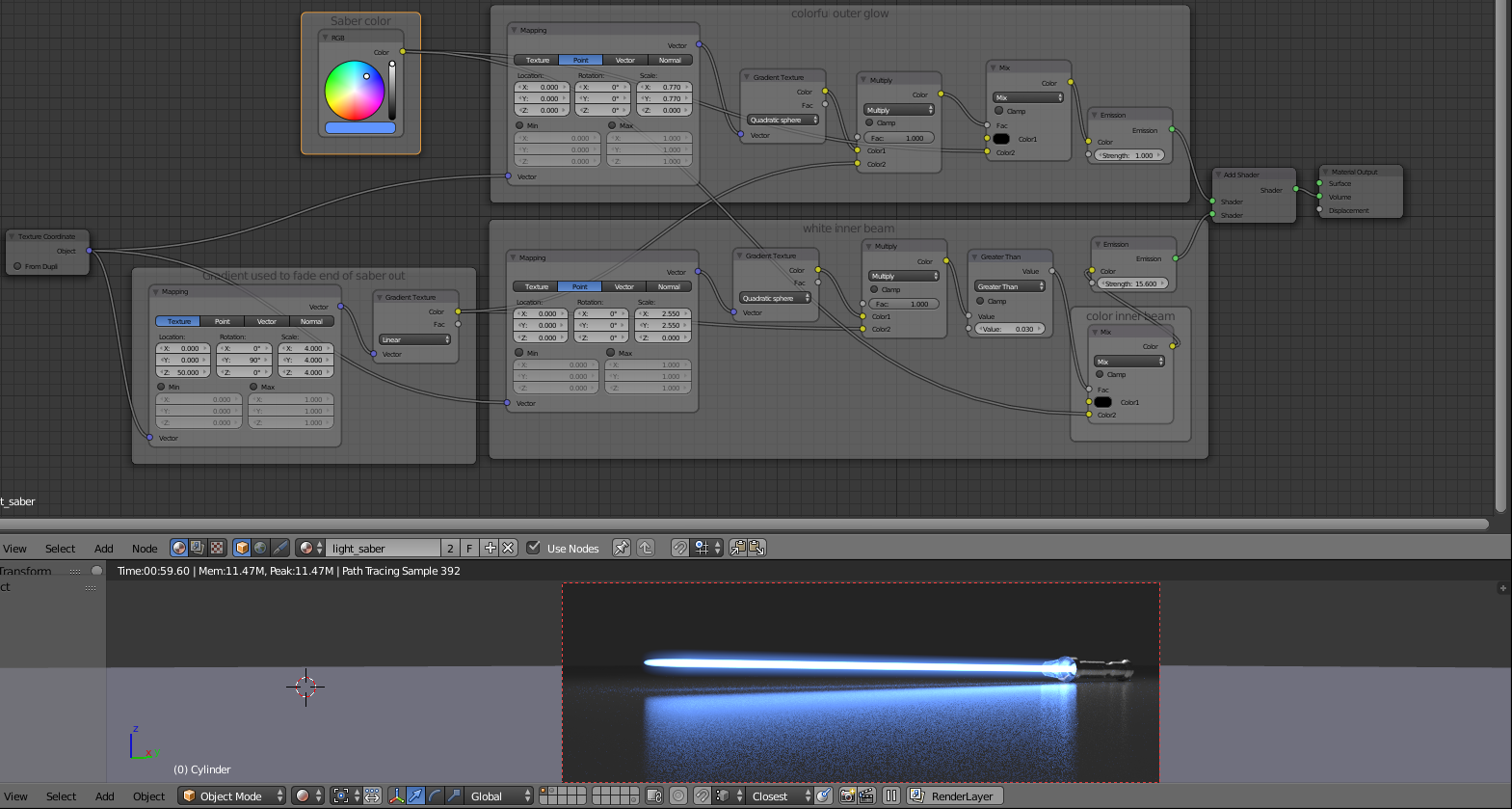 This works by defining two spherical gradients which are infinitely long (making them cylindrical), and using those to create the hard white part and the soft colorful bit.

The gradients are defined in object coordinates, so they will stay with the object when it's animated. Note that because of this, the origin of your blade object will make a big difference. If it's centered it should be fine.

A third gradient is used to fade the cylinder gradients out before they get to the tip of the blade object. This will have to be configured depending on the length of your object and the location of it's origin. It should look something like this: 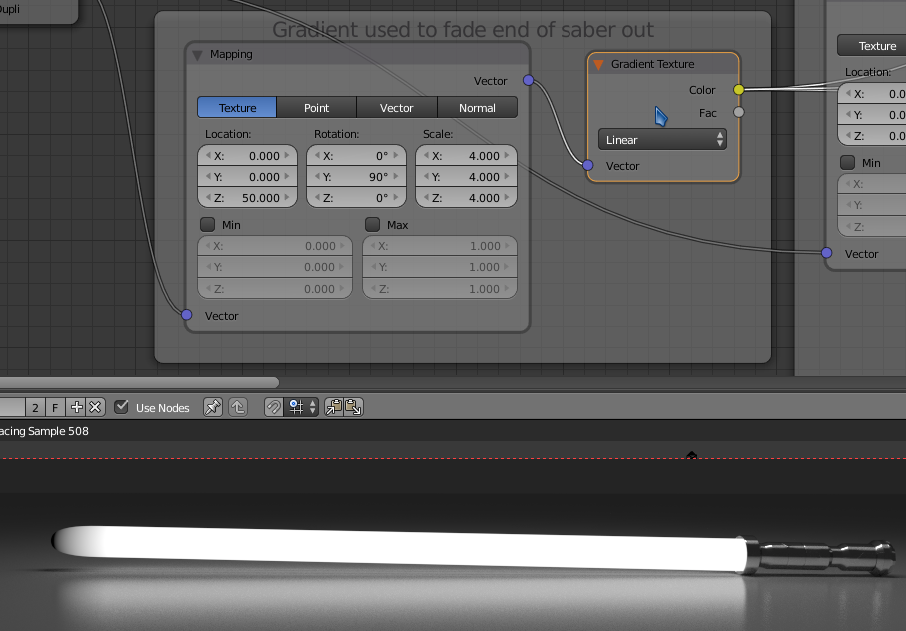 Provided that your origin is centered, all you should have to do is tweak the Z location value in the mapping node until the gradient is in the right place.

Note that your blade object should be a bit fatter than you might make it normally, as it has to contain the glow. Also note that it doesn't actually have to be a cylinder, as the cylindrical shape is defined in the material nodes.

Create a plane and place it perpendicular to the camera and in front of it, that's going to act like a camera filter. (I like using the Create Camera Image Plane Addon to create a plane that always fills the frame and follows the camera using drivers) 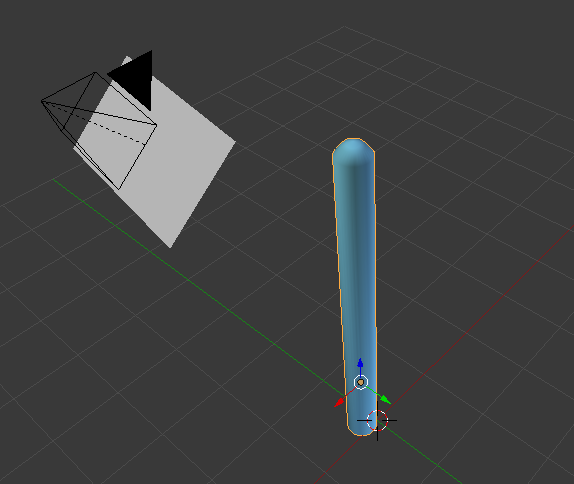 Make the materials for the plane transparency and refraction. 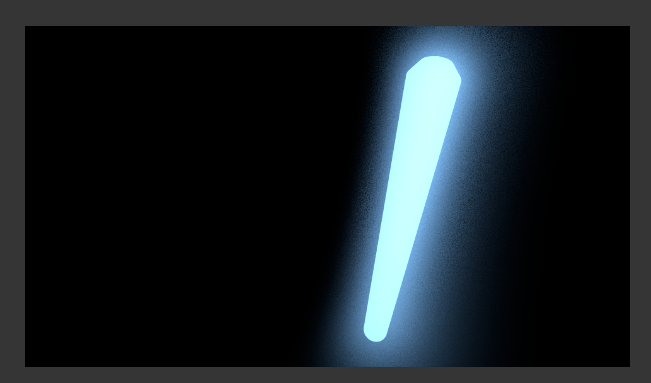 Here's a way to fake a glow in cycles:

Create an object and give it an emission shader. 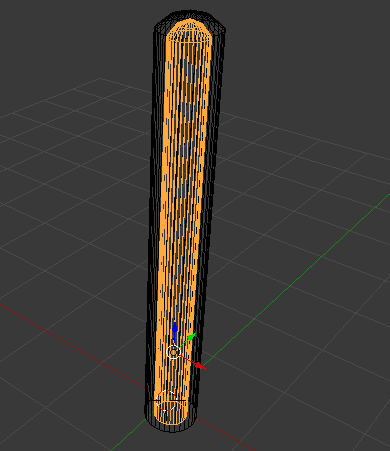 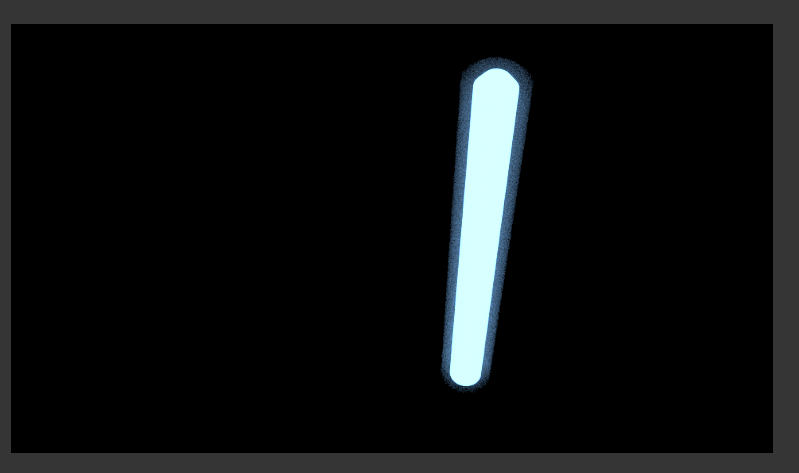 0
Laser bolt glare problem in blender 2.9
0
How can I make a glowing material?
20
Post-processing Lightsabers in Blender
14
How to create a fire/light effect in a spaceship engine
5
Creating a glowing effect with nodes
5
How can I make a part of a texture glow?
11
How to render a wireframe & glow lines effect on a house?
5
A tube of light in a volume shader
2
Lighting for the filament of a lightbulb
3
Creating a "halo" effect for a material in cycles?
See more linked questions

24
How can I get a Depth of field render pass?
39
Is there really a way to make a true toon shader material in Cycles?
2
Blender cycles glow on transparent background
1
Uninterpretablity in depth maps: why the pixel values do not necessarily represent a valid distance?
2
Why changing camera's far clip does not seem to clip the distance for depth map rendings?
0
How to use quaternions coming from ros?
0
Why is a text not rendering with glow effect but other objects are?