I am fairly new to blender but here goes. I am trying to make a mould for 3D printing and have encountered an issue. My mould is in several parts and along the seam of the parts I want to create a "weld" to decrease the amount of material leaking out as I use the mould (see image below, to clarify the final goal is to add welds like this along all cuts in the mould). 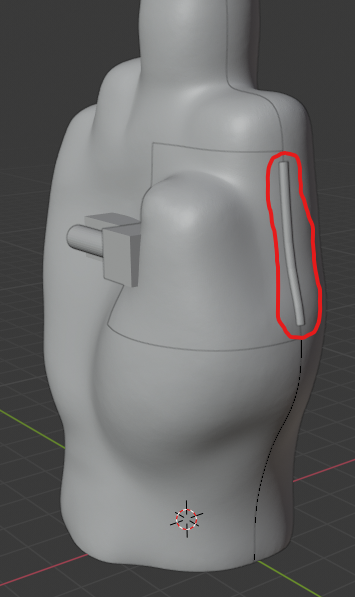 To do this I select the edges on which I want the weld, make a Bezier curve from them add a circular bevel and fill the caps.

Now of course two things are important when making a weld like this.

To do this I would like to use Boolean operations on the curve, I would need to take the difference with one side and the union with the other side of the mould. Now, Boolean operations cannot be made with curves so I transform it back in to a mesh first and this is where the problems begin.

First I notice that if I use the edge as is to create the weld some parts of the curve are so small that the walls will intersect and create inwards normals. This is obviously not good for Boolean operations so I decided to cherry pick out points along the curve that are far enough apart to create the weld.

After picking approximately 10 points I do the previously mentioned operations again (Make curve, add bevel, fill caps, convert to mesh, add Boolean operations. It should be noted that the resulting mesh is a lot cleaner with fewer points but that Blender still considers the caps non-manifold.). Now the resulting weld after the difference operations looks like this:

Basically the inner walls from the subtracting piece are missing. How on earth do I go about fixing this. If I straight up use a cylinder it works fine but a cylinder won't follow the seam well enough in some places of the mould.

Sorry for the very long description but do you have any ideas? Why don't Boolean operations with meshes from Bezier curves work? Thanks for your help!

PS. I added the file if you wanna have a look: https://drive.google.com/file/d/1aNT_ANrLZBxDpm6qfdZJx6JkGyThuwzp/view?usp=sharing

Browse other questions tagged modifiers bevel bezier or ask your own question.

2
Bezier Curve: Bevel Object is creating a flat surface
1
Rounded caps on a Bezier Curve pipe
0
Python: Store rotation / normal in bezier curve point?
0
Distorted mesh when I use a bevel object on Nurbs curve vs. Bezier curve
0
Bezier curve lacking handles
3
Boolean with curves
1
How to child a control point of a Bezier curve to an object