I am using a Particle system to simulate falling dust / debris. The particle start and end fairly quickly. They should look like a short burst of falling dust.

I cant figure out how to get the particles to fall at slightly different speeds.

The particles should be falling downwards with very little Brownian motion.

The fact that the particles are falling at the same speed makes them look odd / too uniform (almost like a static image of some particles which is moving down rather than individual particles.

Also the particles end at a set frame so I get a uniform trailing edge (as below). 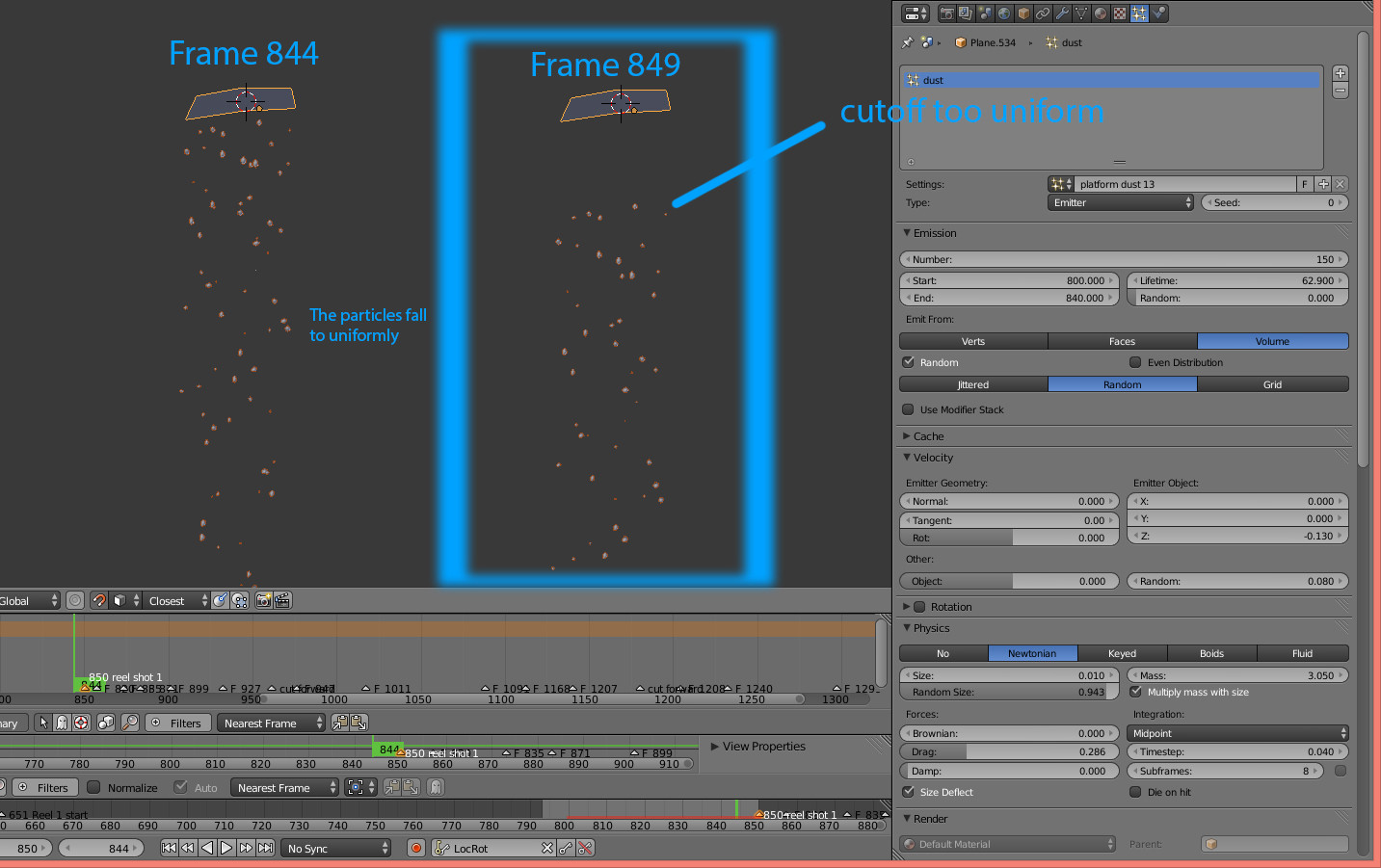 A bit of air drag helps a bit but not much.

Question 1. how to vary the downward speed of the particles?

Question2. Can the density of particles be animated so I can brake up the distribution?

Yesterday I found out how to control the particle's speed. You can do this from "Timestep"! 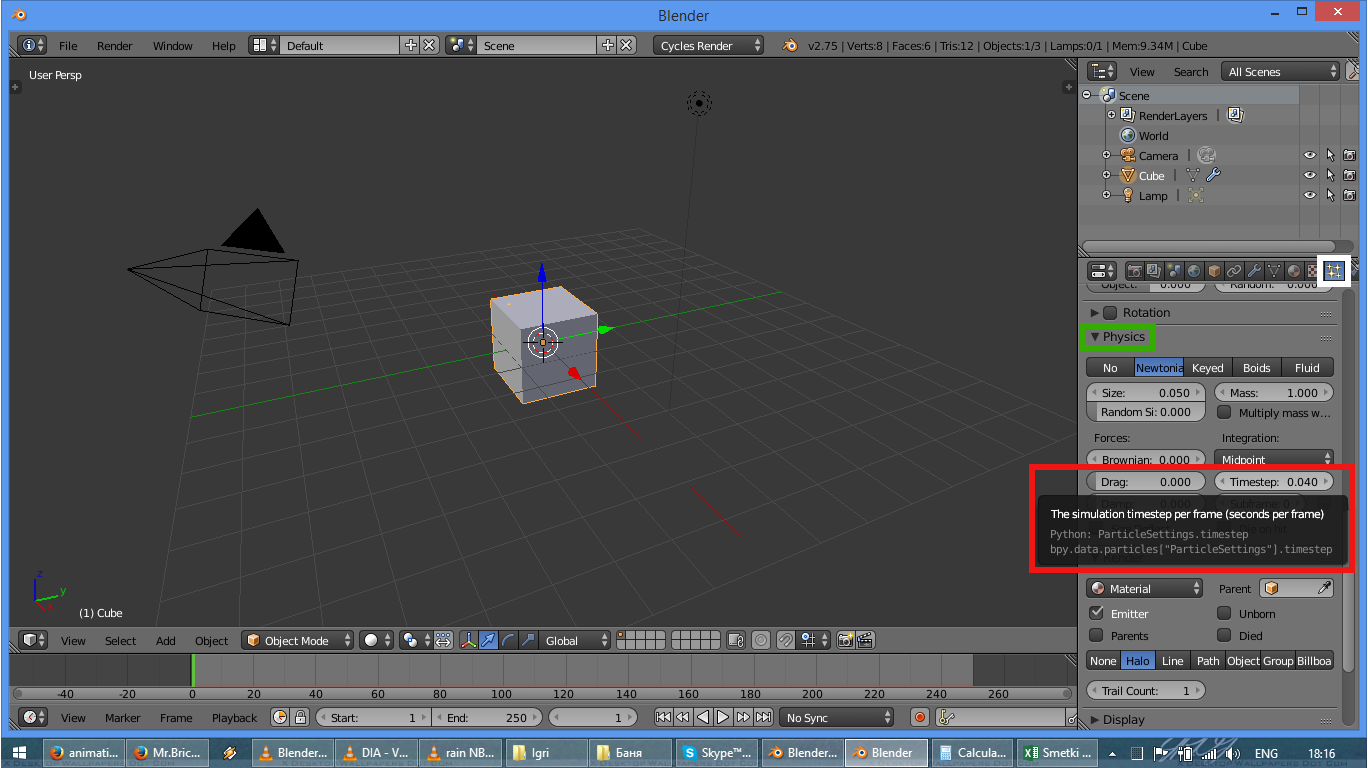 And most of all!!! You can keyframe the particles "Timestep", so you can do nice and cool animations. I have made a quick demo in which you can see that. It's here: Particles speed test in Blender .

I hope I was helpful!

P.S. I want to apologize about my bad english (it's not perfect).

Gravity would be the biggest factor that determines the speed of particles falling. You can change the amount that gravity effects the particles and you can also increasing the damping to slow down their movement.

With a different number of particles from each emitter you can have 80% of your dust settle in 3 seconds, another 10% in 5 seconds and the last 10% take 10 seconds to settle.

This also helps with the "all ending on the same frame". With multiple particle systems you can have the emitters with higher particle counts finish on frame 200 then have an emitter sending two particles a frame finish on frame 250, with some varying amounts being emitted in between. With multiple emitters or broken geometry emitters you can have these particles emitted in different places instead of being concentrated to one small area.

You can also use multiple layers to your advantage, with an emitter on a different layer you can have a force field effect the one emitter's particles so they move differently to give a separate appearance. 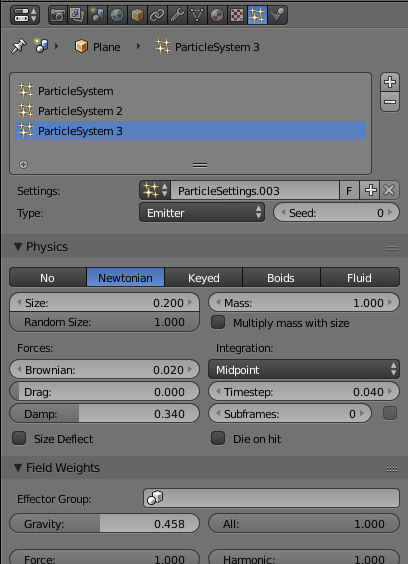 This may be overkill for just a small puff of dust, but for a good looking effect I would use smoke particles.

You can read more about the smoke simulator here. The documentation is kind of old and uses BI, so here is here is a video on using it in cycles.

1
Particle density animation using dynamic texture
6
Particle system is not using density vertex group
2
Why is what I am seeing in my particle effect animation playback, not what I get when I render it?
2
Particles and Textures and Density
5
3-Dimensional Voronoi Mesh
4
How to simulate particle so bigger particles will fall faster than smaller ones
0
Particle System ignoring my vertex group density
2
Improved explosion: possible to nest smoke domains and apply them to mutually exclusive emitters?
0
The Density of Particle System is inverted between viewport and render
0
Very large count values lead to odd distribution of particles