I'm trying to achieve the merging of multiple video strips like in the following 15 sec in, to 16 sec in - caravan to boat clip. I think the clip has been animated with a vertical strip.

There are a couple ways, but I would use masks: 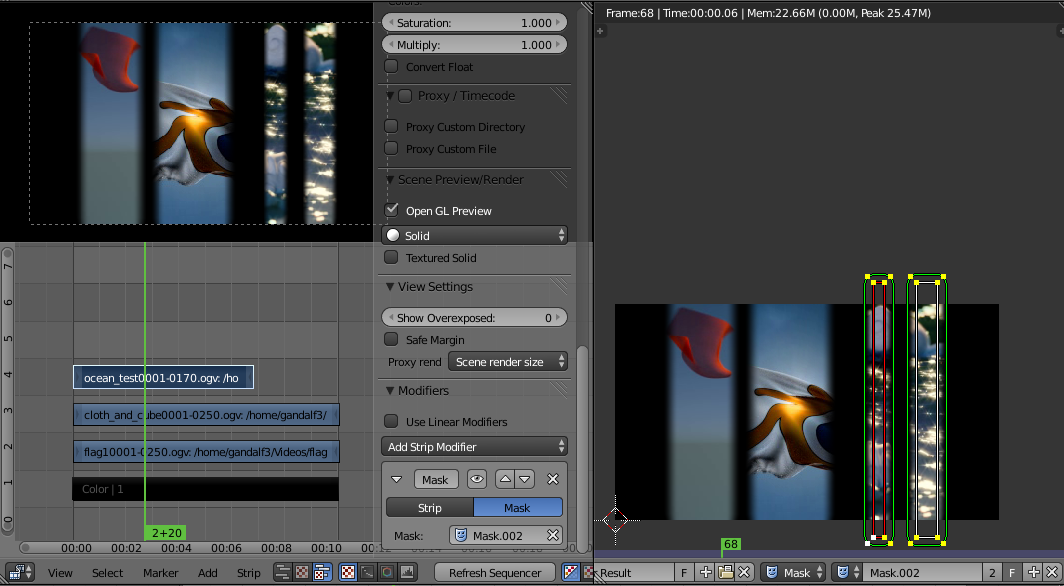 Unfortunately there doesn't seem to be any way to get the image editor to update in realtime at the moment, so you'll have to manually refresh it by pressing F12. For that to work, the viewed image must be set to Render result.

As well as keyframing masks you can get a lot of control by making your own animated video strip and using it as a mask strip. CGCookie has a archived tutorial that covers making and using the mask video. The only other tutorial I know of is by David McSween, he uses a single greyscale image and animates the brightness and contrast to get the transition.

The basics of creating an animated video to use as a mask is to create a video that defines the transition, black shows the old strip, white shows the new strip with levels of grey a mixture of the two. You can easily imagine using blender to create a simple animation of shapes for this, add this transition video as a strip in the VSE and then add a mask modifier and select the transition strip.

1
A better way to composite one video sub-clip over another with chroma key?
5
VSE-Background image behind foreground video. Alpha over, alpha under don't work
1
"Holdout"-alike Effect Strip for Frames in the VSE?
1
transitions between video strips in VSE not working... am I doing something wrong?
3
VSE: How to Reuse an Animation or how to Create an Animation Template?
1
Adding Borders to a Video (Letterbox Effect)
0
How do I use Proxies when compositing strips?
2
How to make multiple speed changes in a video