I render planes with procedural materials and don't need any other effects in those renders. The preview is generated within seconds but the final render takes minutes.

To speed up Cycles, you are going to have to sacrifice realism.

If that is okay for your projects, you might try adjusting the filter glossy field, disabling Shadows, Caustics, and Bounce light, , like so: 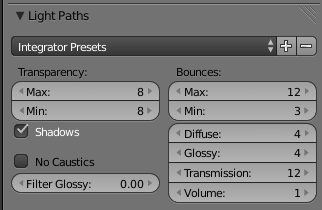 Set the fields labeled, "Max" and "Min" to adjust the overall amount of Bounce Lighting, but note that this will also disable the "reflectiveness" of an object; If you don't want that, then adjust the fields bellow, with out changing the "Glossy" one.

There are a variety of settings that effect the time it takes to render a scene with cycles. Of all these settings there are really only three things that vary between preview and final rendering - resolution, samples and compositing.

The resolution can make a difference if you have a small 3dview to preview render in while you can see your nodes and uv editor... the final render resolution may be a lot larger than the visible 3dview so will take longer to render. 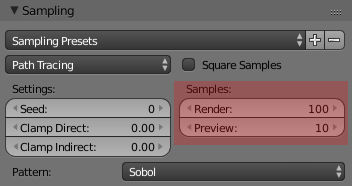 Compositing and render layers can also add time to the final render if you have anything setup there.

It sounds like you want a copy of what's showing on the viewport, but rendered to an image using the camera's resolution settings.

There are several options, each with their own caveats:

You may want the "OpenGL Render." There are some settings for this in their own section of the render settings panel, and there is a "render OpenGL image" button at the bottom of the viewport, which looks like a photo camera. Incidentally, there's also a "Render OpenGL Animation" button right next to it.

This will give you an image that's exactly the same as what you see in your viewport, but anti-aliased (if OpenGL AA is turned on) and at the resolution you set for your render.

If you're wanting a "shadeless" equivalent for Cycles, the closest you'll get is using an emission shader. Create your textures as an emission shader (start with a strength of 1) and it won't accept any shading, making it nice and even... incidentally, emission shaders also render much faster than other shaders.

If THAT doesn't work, I'd make a giant emissive plane right behind the camera to light your material plane evenly, and then render using the "Direct Lighting" preset (or something similar). This won't be as fast as an emission shader, but it will refrain from calculating any additional bounces (if it can't find the light after one bounce, that pixel is considered unlit).

Not the answer you're looking for? Browse other questions tagged cycles-render-engine rendering performance optimization or ask your own question.

24
Node for setting render colour, regardless of lighting
0
Approach to get fastest flat color render times?