This might be a bit confusing, so my apologies before hand. I'm making a shader/nodegroup that emulates colors under a blacklight. For most colors (greens, reds, blues), it works just fine and looks perfect, but for others (whites and yellows) the result isn't what's expected.

What I'd like to do, is be able to have the shader recognize that the color input is white, yellow or any of the other colors that don't work right, and be able to isolate them so I can correct them with the proper nodes. But I'd also like to have it know when I'm using the colors that do work, and not apply the corrections. So basically, selectively apply corrections based on the input color.

I imagine the solution is probably some logic type stuff using math nodes and maybe the separate RGB nodes and such, but honestly that is beyond me. It's obviously possible to just use 2 separate groups or inputs for them, but I'd ideally like to be able to plug in image textures and such and have it "just work".

Starting with the colors in the top left, supposing for the black light effect we generally just saturate the colors a bit. (top right). 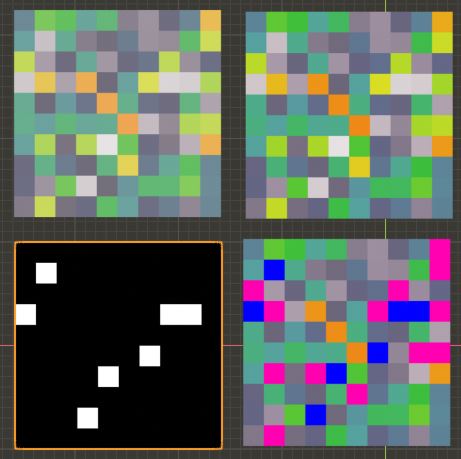 Then we can use the RGB-Distance node group to pick out colors similar to examples we've picked.

The bottom left square above shows the output of the top Color Ramp node in the tree below. It's a mask of colors which are quite-like-white in the original (top left) square.

Masks like that can be used as factors to mix between the saturated tiles and the ones we've picked out for special treatment. The top branch picks out whites, and replaces them with a darker blue, and the bottom branch replaces yellowish squares with magenta.

This might do it for you on its own.. but it could be tweaked to place more emphasis on hue, brightness, etc., by changing the definition of distance between colors.

I should point out that to keep things linear, and let me E use an eyedropper to pick colors from the screen, I've set the color-management in the .blend to Raw, with no sRGB in the display. You will probably want to change that.

Not the answer you're looking for? Browse other questions tagged materials node-editor shaders color masking or ask your own question.

4
Any blacklight effect suggestion for 2.8?

3
How can I give a single object multiple colors in cycles?
0
How do I achieve this color effect in the compositor?
1
Is there a way to separate colors from chained mix rgb nodes?
1
Cycles and nodes, trying to use Diffuse BSDF as color source for Glossy/Subsurf Scattering BSDFs.. not working
1
How to copy color from webpage to Blender material surface color input value?
4
Separate alpha from color in Shader Editor
7
Is it possible to pass a [color ramp] to a node group?
4
'color' and 'position' input for Color Ramp node?
3
How to assign a different material color to each geometry nodes instance