How do I make more complex LEGO simulations in Blender?

In the lego movie, the fire, water, and smoke is made of lego bricks. It's not just a simple method of having one type of brick, several different bricks and brick slopes are used to get a really nice effect. Also, the location of bricks and the types of bricks changes over time. I have no idea how to do this in blender. (I want an animated effect, not a still image.) is there an addon, or some other way to do this in blender?

(I'm not expecting someone to have an answer that includes smoke, fire, and water, I just want one of them, I figure that any answer someone gives me can be transferred to another)

The final codes requirements are listed at the end of the post.

The tutorial by Ray Mairlot, which JBlock linked in the comments, is helpful for fluid simulations, or anything with a surface.

I will give insight into a method for volumetrics, specifically smoke, with different pieces. For professional use, you could include pyopenvdb (the install is complicated) functionality.

We can access the density_grid of the smoke with python. From [brickarchitect.com], we gather the dimensions of the smallest brick. (The smallest brick is a third of the heigt in the following image: 3.2mm.)

We will use convolution with the smoke simulations density_grid to decide, if we should use a sloped piece or not.

Im going to use the 2 (5) bricks. brick2 comes in 4 rotation variations, which all have their origin at the bottom left.

Consider two 2 dimensional 2x2 kernels (red and blue) and a 5x2 image (gray). To do a single convolution step, overlay a kernel over the image, multiply the overlaying number, add them together, then place them on the image at the position of the top-left square of the kernel.

For the red kernel, the convolution of the first pixels, look as follows.

For each different shape [5 (rotated) bricks] we will create a kernel and convolve it with the image. Then, we will compare the kernels and choose the maximum value for each pixel. Looking at a single kernel, we compare if its convoluted image has the same value as the maximum image. If yes, we can choose the shape and place it at that pixel.

I noticed, that we will need higher resoluted kernels for the slopes and have chosen a 6x9x1 kernel for a sloped piece.

By changing the weights of each kernel, as well as the maximum image, you can easily adjust the ratio of each piece. In my first render, slopes were quite sparse.

In practice, we can just construct the kernel as a np.array and divide it. The more we divide it, the less it will contribute.

Do a smoke simulation. Import the usual helpful modules for python.

Get the smoke modifier settings off the domain object.
Get the density_grid and calculate the step size. I used a cube, with its bottom-left corner at the world's origin as the domain.

If we construct a mesh from this data, and add vertices if the density_grids values are over a certain threshold, then we can visualize the data with vertices. 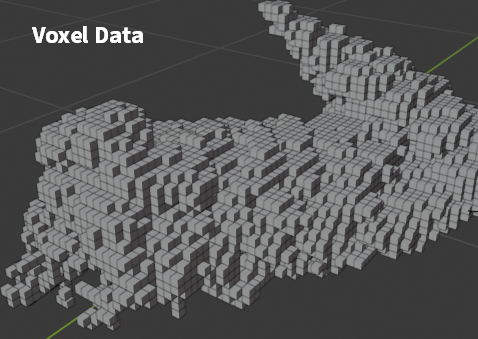 After this prototype, for real now. Create a class to sample an object once and instantiate later in another bmesh for the brick types.

Since the evenly spaced voxels are not the appropriate size for the bricks (which have different x, y, z dimensions), we have to resample the grid with scipys ndimage.zoom function. Note, that the original grid will have stored the values in z, y, x order, which we will work with.

I will construct the kernels for these bricks with numpy.

Since we are using a grid, with a higher resolution than our brick size, we can adjust the step size through that grid to get to the discrete steps the size of our smallest brick.

To check which if the convolved grids, has the highest value, construct a max grid with a small initial value (0.065). Where there is no smoke, the other grids will have values of 0. When comparing them to our small number in each cell of the max_grid, the max grid will be larger. This results in no bricks filling those spots. No smoke -> no bricks.
For each brick, we check if it has larger values in its convoluted grid.

If we compare a grid of a brick with the max_grid (brick1_grid == max_grid), then we get a binary array, which holds True for the positions, where we have to place the brick kind. For that, I use the place function which we wrote earlier.

After downloading the file, bake the smoke simulation. Then execute the script on a frame with smoke. The script takes approx 5-20s in the given resolution during which Blender is unresponsive.

To render all of the frames, simply call the wrapped operation while looping through all frames.

I won't update the script in the .blend. The github link is up to date.

Use geometry node - position to determine node set responsible for coloring legos in effect. You can also create separate legos, create geometry and add particle system that will emit lego bricks at this geometry(faces/verts). If you choose to emit random lego cube from set of cubes you made earlier, choose their lifetime very short, and emit them often you should get nice effect :) Try looking for addon for generating effect geometry. Im not sure if shape keys would work in this case. 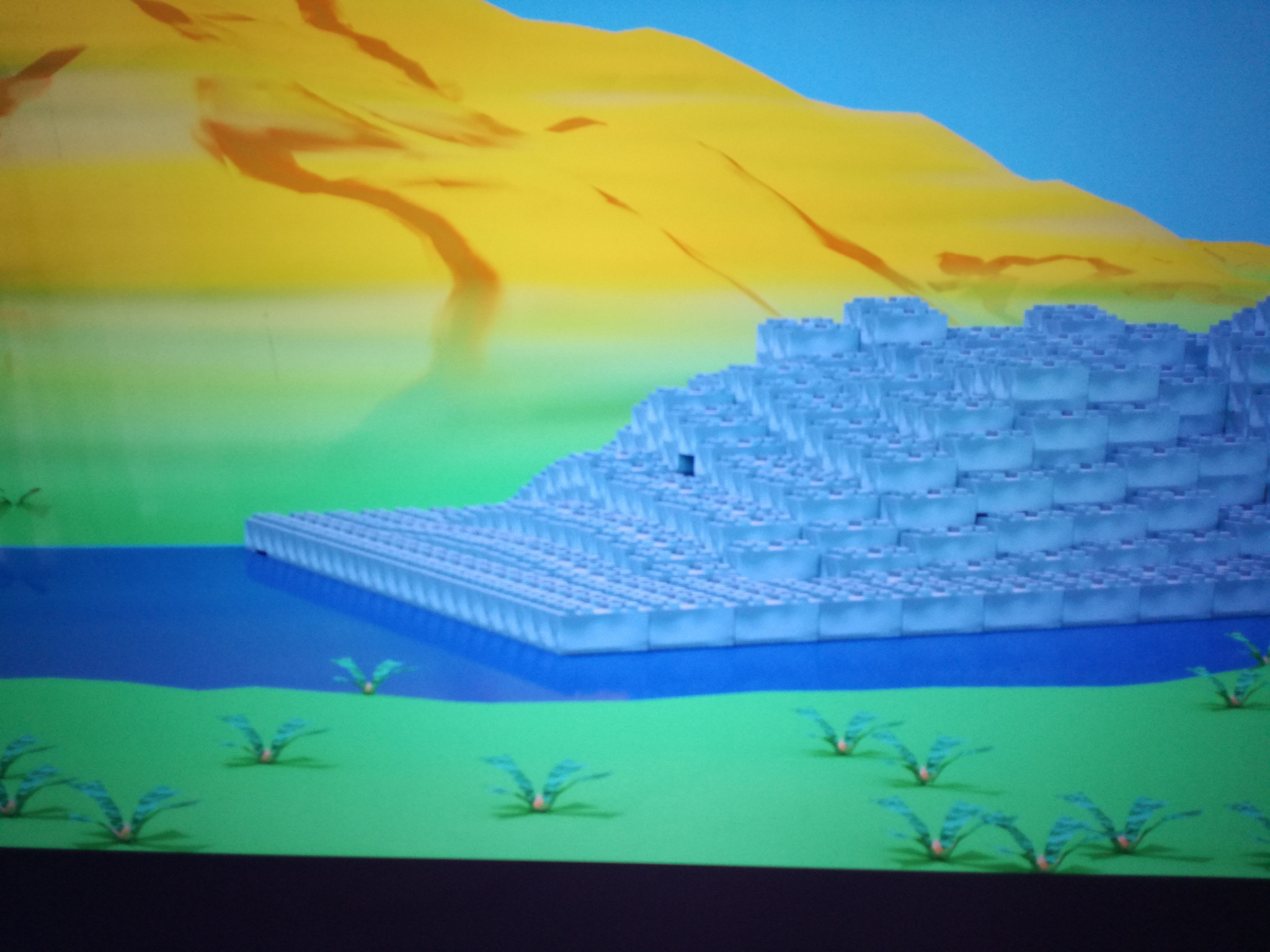 So I created geometry from landscape addon I set large emmit number. Lifetime 1. The problem is that despite I can control water movement on the time of creation of landscape by just changing its offset value, I cannot animate it after :( Photo above shows slopes. If you create grid-like mesh steps can be exactly 1 lego block (tested). You will than need to use grid mesh with geometry boolean modifier.

Update: You can actually use shape keys, but not in direct meaning of this. You create multiple meshes from landscape modifier, that differ a bit using offset x or y. This will make them look like next frames of water. Then make shape keys on those objects and then you can hit space "transfer shape keys" into mesh that creates particle simulation. And make transition between tham making key frames on their proportion.

Not the answer you're looking for? Browse other questions tagged smoke-simulation fluid-simulation fire or ask your own question.

17
What Are the Differences between Smoke Collision Types?
10
How to bake multiple fluid simulations in one scene?
2
How to make this glass more realistic?
1
Composite multiple render layers for multiple frames?
0
Fluid inflow looks like a “shower” - How do I make the inflow more “cohesive”?
4
Use Blender Cuda Build to use GPU in Simulations:
0
How to simulate in blender, smoke coming out from a bottle or a flask?