How to simulate magnetism In Blender?

Is there a way to create magnetism in Blender? Using the physics engine or the game engine, I want to create BuckyBalls (the magnetic toys) within Blender.

Assuming that you are indeed referring to the magnetic toys and not the carbon nanomaterial, then you have a couple of different options. 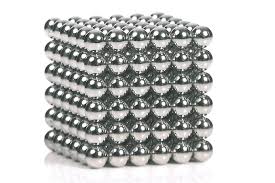 The only possible way as of 2.77a is to write your own engine for magnetism in python. The hint how to do that as an addon is here:

Create custom physics for an object with python

Explanation why it is not possible:

A Magnetic force field is not what you think it is, it only acts on moving particles. Every force field effects all particles or rigid bodies the same except Charge force field. That is why only this one comes in mind, because we want to attract one kind of magnetic pole and repel the other kind. But Charge force fields work only on charged particles and you cannot constrain 2 particles to behave like fixed pair and be a magnetic dipole.

If you actually want to simulate the magnetic forces, you could use a Force or Magnetic force field with rigid body simulation.

you would need to use force field empties parented to the rigid bodies, as it seems force field objects are not effected by other force fields..

also particles with a self effecting force could work, or also with a magnetic force field.

Not the answer you're looking for? Browse other questions tagged game-engine physics force-fields or ask your own question.

8
Create custom physics for an object with python
3
How do I make two objects pull toward each other in a zero-gravity scene?
2
How can i make to objects act like magnets so they push each other
1
How to make a neodymium magnet?
0
How to initiate "snapping" of an object to another with the presence of another object?
1
How to simulate a 3D Electromagnetic field