[I understand that you can move the view-port camera with Shift+` command and enter walk or flying mode].

Essentially, what we have right now, is you hold "Middle Mouse" and then you do some weird shimmying with "Shift" and "Scroll wheel" until you arrive at the intended view. It is far less precise and I would like to change the existing implementation to mirror Unreal's set up.

If so, please let me know! I love Blender and this would go a long way to making this feel like home for me.

As far as I'm aware, the closest thing Blender natively has for that style of navigation is the Shift+` thing that you mentioned. It seems that walk/fly navigation is better for navigating through scenes like you would need to do a lot in a game engine whereas turntable navigation (like what Blender or Maya have) is more useful for modeling or animation, which is probably why Blender's walk/fly mode isn't as good as Unreal's.

You can change the Blender navigation settings by going into Edit -> Preferences and then clicking on the "Navigation" tab. 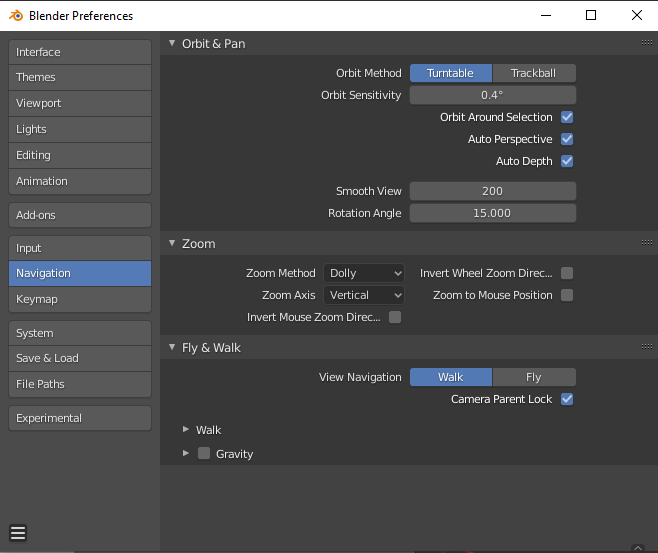 Most likely, you'll want to keep the orbit method on "Turntable" rather than "Trackball," but you could try out both options. Basically, Turntable keeps the objects from getting rotated sideways whereas Trackball lets you control each axis of rotation. Beyond that, it's kind of hard to explain, and I don't know how to record GIFFs, so you can just try it out yourself.

Although it's disabled by default, I like the "Orbit Around Selection" option. That way, if you have a large scene, you don't have to fumble around with Shift+ to what point you want to orbit around. Instead, it will just rotate around the selected object. The disadvantage with this setting is that if your selected object is a really large object such as the ground or a room, it rotates around the origin point of that object, so it might still be a bit confusing if you have that object selected.

The "Auto Perspective" option just automatically switches the view to orthographic view when switching to left/right, top/bottom, and front/back views.

The "Auto Depth" option is also pretty useful. There can be times when zooming just becomes painfully slow because the way zoom works is by zooming onto a particular point, and it gets slower as you get closer to that point. If the zoom focus point is somewhere between the viewport camera and the object you're trying to zoom into, zooming will feel painfully slow. The only way to fix it is by using Shift+` to get closer to the object you want to zoom in to and thus change the focus point of the zooming... or just check this box so that it finds out how far the object under your mouse point is and just uses that as the zoom point.

Most of the zoom settings you'll probably want to keep the same. Probably the potentially most useful option in this section will be the "Zoom to Mouse Position" option, but I personally don't like it.

I was going through a faze where I was really into Blender, and my birthday was coming up, so I decided to get the 3DConnexion Space Mouse for $130. In Blender 2.8, there are two modes you can use with the space mouse, a fly/walk (free) mode or an orbit mode which the mouse was originally designed for. In the fly/walk mode, it feels like you're holding the joystick to a space ship or something and can push the vessel through the scene. In the orbit mode, it feels like your holding the actual object itself instead of the joystick and are rotating it directly... at least it would if I ever took the time to use it enough to get more used to it.

The settings for the space mouse are found in the Preferences under the Input tab and the NDOF expandable section. 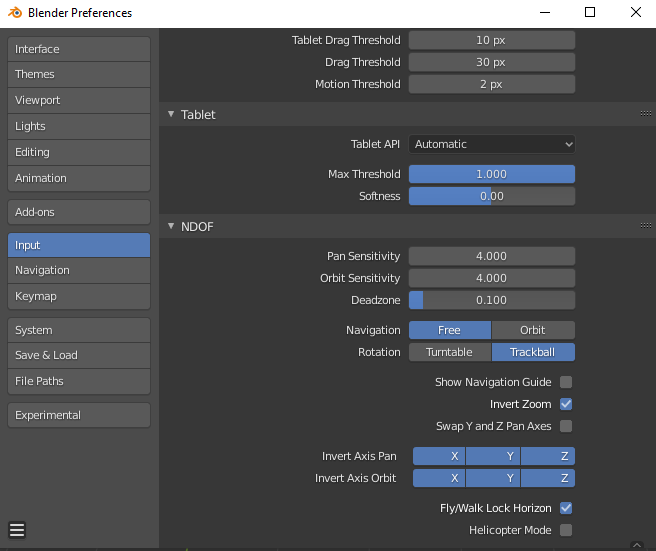 The space mouse works great, especially if you're doing something like painting or sculpting with a pen, but there are two major disadvantages to it. First, it cost $130, and honestly, it's probably not worth that much unless you're really into 3D design... or if you're really really really really curious about it and can't get sleep at night thinking about what it would be like...

The second disadvantage is that it takes away one of your hands. Blender is designed for one hand on the keyboard and another on the mouse. The most practical way to use the space mouse is with your right hand on your regular mouse and your left hand on the space mouse. However, you then have to let go of one of your mouses to hit the shortcuts. Granted, there are programmable buttons on the mouse that can open radial menus that hit various shortcuts, also Blender 2.8 doesn't depend on shortcuts as much as Blender 2.7, but it still can be a bit impractical in my opinion.

I saved this for last because I'm not sure how or even if it will work in Blender 2.8, but I found this YouTube video that talks about how to set up Unreal Engine navigation using this page from developer.blender.org Again, I haven't tested it out, but it might be just what you're looking for (or it might not work at all)

Not the answer you're looking for? Browse other questions tagged 3d-view unreal-engine or ask your own question.