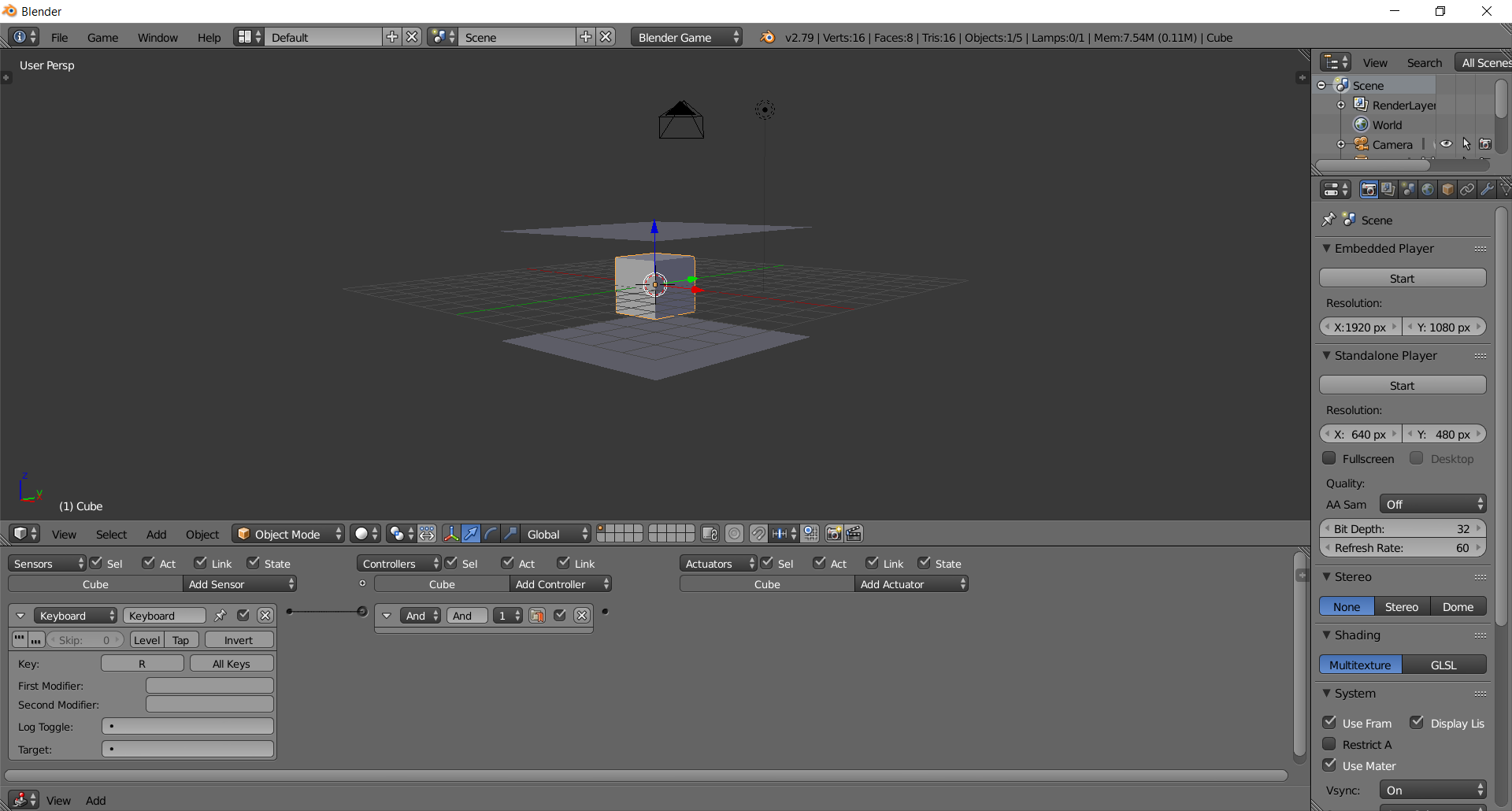 I believe Python is the easiest way to achieve what you are looking for.

If I understand you correctly, you only need to switch the value once, not back and forth, which is quite easy to do. Simply write these two lines in the text editor and save it somewhere:

Note that by default, gravity is set to negative 9.8, so positive 9.8 is actually inverted.

Then, go to whatever object you want, for example the player if you have one, and add a Keyboard sensor connected to a python controller. Choose the script you just wrote, and you should be good to go.

EDIT: While the code above will invert gravity, it can't switch it back. This will explain how to make gravity switchable as many times as you like. 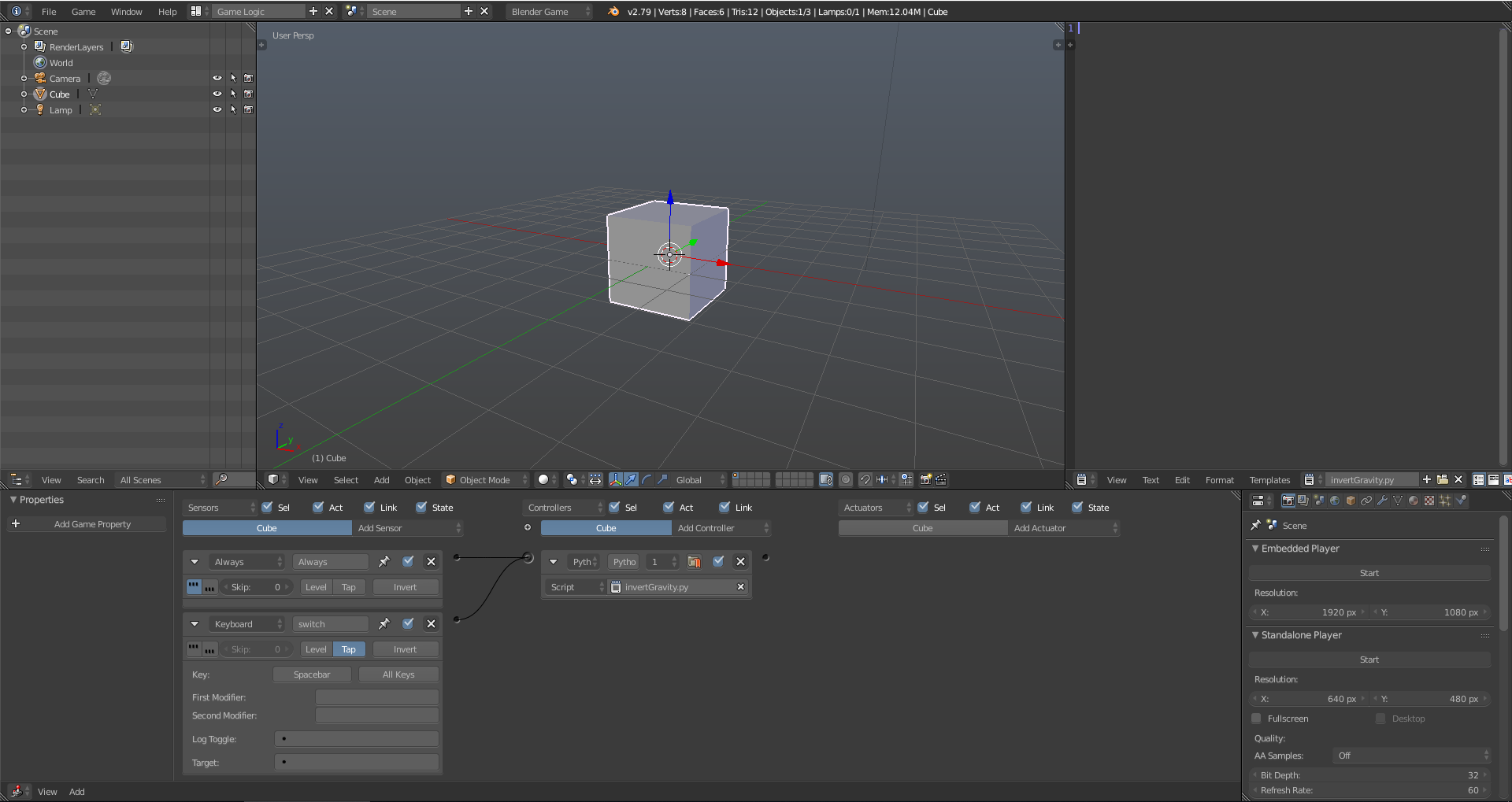 This is my initial setup. As far as I am aware, Python is the only way to mess around with the value of Gravity, so that's what we'll use. Make a new text file in the text editor and call it whatever you want. Since it's python code, you can end it with .py to indicate that, but it's not necessary.

On the always controller, enable the 3 raised dots icon. This will run the script every time the game updates (I think it's 60 times per second by default). For the keyboard sensor, make sure you know what it's named. I called it "switch" since when that key is pressed gravity will switch directions. The reason the name is important is we'll have to reference this sensor by name later on. Also enable Tap, as this will prevent weird behavior when holding the button.

I also set the cube to be a rigid body, so that it would obey gravity and we can see whats going on.

Here's the script that we can now use to invert the gravity. Note that to work the keyboard sensor needs to be called "switch", or you have to change the name in line 4 to the name of your sensor. Either works just fine. Anything with a # symbol in front is a comment, and is only there to explain what's going on.

You can stop here, but I explained how the script works a bit so you can figure out how to change gravity further in the future if you like.

This script waits for the space bar to be pressed. When the space bar is pressed, the bge.logic.getCurrentScene().gravity gets the current gravity values on all axes and stores it in the grav variable as an array. An array is simply a list. It would look something like this:

This means gravity will not move things on the x or y axes, but will on the z axis. Since we assigned this to a variable, whenever we now use this variable, it uses the array that we assigned to it instead.

Now all we have to do is set the gravity, but invert the z axis value. The bge.constraint.setGravity() lets us do this. We just need to tell it what values to use. We can tell python to use a value from a certain place in an array by giving it the array, then the index (the first number is at position 0).

5
Relation between BGE framerate and Action framerate
3
How to simulate a gas?
2
How to write controller to activate Blender Game Engine actuator?
3
How to calculate centripetal force in BGE?
0
Stopping a character fall in Blender Game Engine
0
Modify animated Armature BGE
1
Play audio file when scene starts but don't play it again if leaving scene and coming back