So, I need the character's eyes to look at the target bone. There are some things that I do not want to change so please don't share a method that will require me to change one of the following:

1.) The pupils are flat cylinders that I want to move around on the lens. I want them to be cylinders, I know there are other ways of creating pupils on a character but this is what I think is best for this character set=up.

2.) I want the eye bones to be close to his eyes so I can move them easily when I don't need the target in certain situations. Actually, controlling the eyes with individual eye controls and being able to switch between that and an eye target is a common thing in rigs. Anyways, I want to keep the eye bones.

Does anyone know how to do this? Thanks.

If I understand correctly you could try it this way: 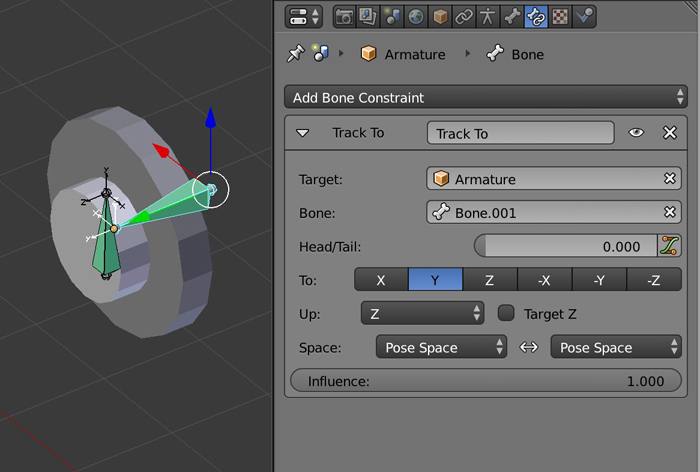 I assume that your "curves" are custom shapes for your bone rig. You can add a simple "damped track" bone constraint to the pupil's bone, pointing to the target; then you can animate the "influence" parameter to control the pupil either with the target bone (influence 1.0) or the pupil bone (influence 0.0).

0
How to make character-mesh deform naturally when animating?
0
The rigged eye does not close completely
1
2d texture eyes that can move around freely
0
Eye rig not following body rig properly
0
Eye bones are stuck on Eye Mesh when Posing other bones
0
Connecting eye rig to head bone
0
Eyes not moving with body
0
How to move texture via rig