I have a node setup consisting of a procedural texture, and an image texture. Alone, both are fine when plugged into the Base Colour input of a Principled BSDF. However, I have not found a way to combine the two without one texture affecting the other.

The most promising setup I have is to add the two textures using Vector Math, then plug that node into the Principled BSDF node. However, this causes the colour in the image texture to change from orange to yellow. The only other colour data in the image is alpha transparency.

I suspect the transparency might be the cause of this issue. If this is true, how do I go about adding the image texture on top of the procedural one, without altering either texture's colours?

You are using a VectorMath node there, rather than a color blending node. As Craig D Jones said, MixRGB is correct for color blending (like 'photoshop-layer' blending rules).

It's unclear what your goal is, but you appear to mean you want to just 'alpha over' the two inputs, when you say 'without affecting each other'.

One way to achieve that would be to pass the color data to Diffuse BSDFs, then use a Mix Shader to combine these (with 0.5 giving the middle result of some from each), and then take that shader output into a 'Converter > Shader to RGB' Node.

The 'Shader to RGB' node is under 'Converter', 3 items from the bottom of the menu, assuming you are editing an Object's Material nodes. It is not available in World nodes. 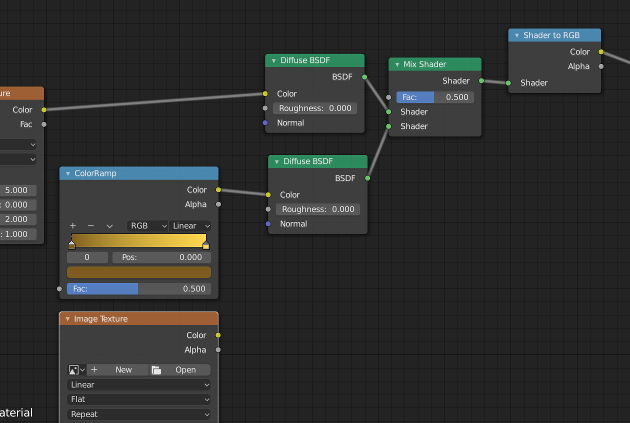 4
Editing group node sockets, with no external input?
2
How to put an Image Texture over a material in Cycles
9
How do I get transparency to work with the Principled BSDF shader?
1
How to make blue hot metal
0
Access color channels independently of alpha with Cycles?
1
How to use a texture colour to define a transmission map
6
Changing colours precisely, procedurally