I'm trying to model the Five-Seven handgun, which as you can see in the image below has some grooves running along its handle. 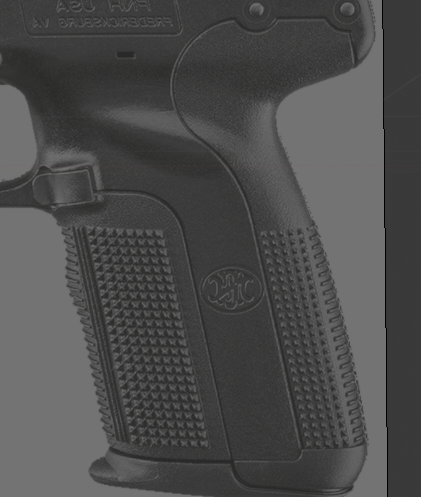 So far, I have blocked out the lower part and am trying to add in details such as this. What I usually do is try to use the 'inner' vertices created during the blocking out phase to trace out the details, but my geometry always ends up messy instead. Here's an example: 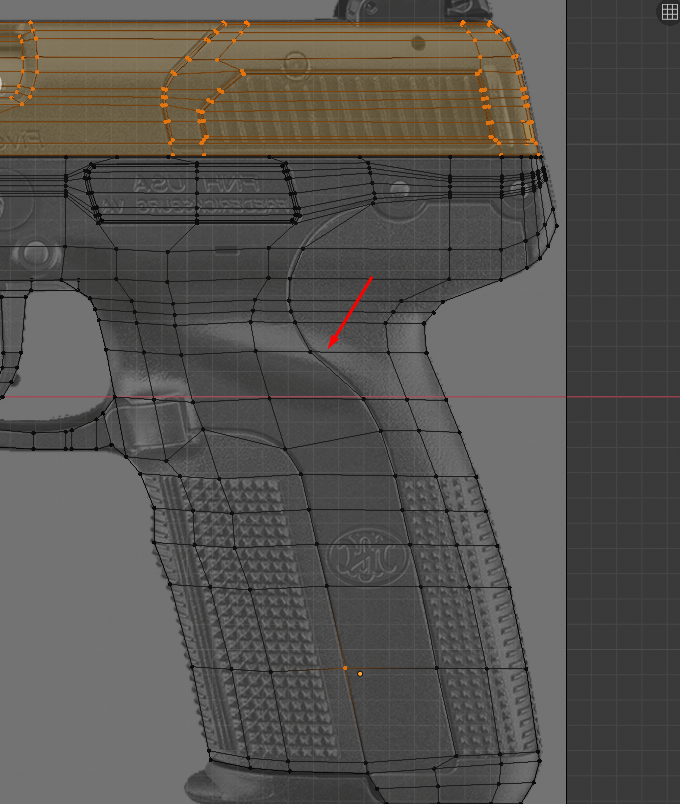 I translated the vertices I had to best fit the groove on the right, however I am bound to run into problems - the vertices in the top curve of the groove are going to go extremely close to the vertices that resulted from modeling the engraving on the top left. If I try to use those, then I end up with very awkward edge flow. I also attempted using the Knife Tool to cut some triangles, but they also result in extremely bad topology, not to mention that I've been repeatedly instructed to avoid triangles as much as possible (this is going to be a game asset).

The dealbreaker is that even after trying all those alternatives, when time comes to bevel the groove I also end up with bad geometry and checking the mesh under smooth shading gives me horrendous results.

Tthis is one of the walls I always end up running into when modeling complex hard surfaces. I'm including a .blend file in case you'd like to take a look, and am open to critique about my mesh overall. Thank you!

I would do it this way: First model the general shape of the gun with no worry for the grooves. Once your good, begin to draw the grooves lines with the knife. Keep using the knife to make sure you have mainly quads and not tris or ngons, then bevel the grooves, and extrude inwards. You'll have to bring some corrections of course. You could even separate the grip in several different meshes as anyway it will be hidden by the grooves.

For the main handle grip you are not far away. The top part has too many edges close together. I would increase the subdivision count for the handle and shape the edges as required. Bevel each edge for the groove and use a bevel x 2 and move the centre set of faces inward. Try for similar sized faces if you can. I am sure everyone has their own way of doing this. 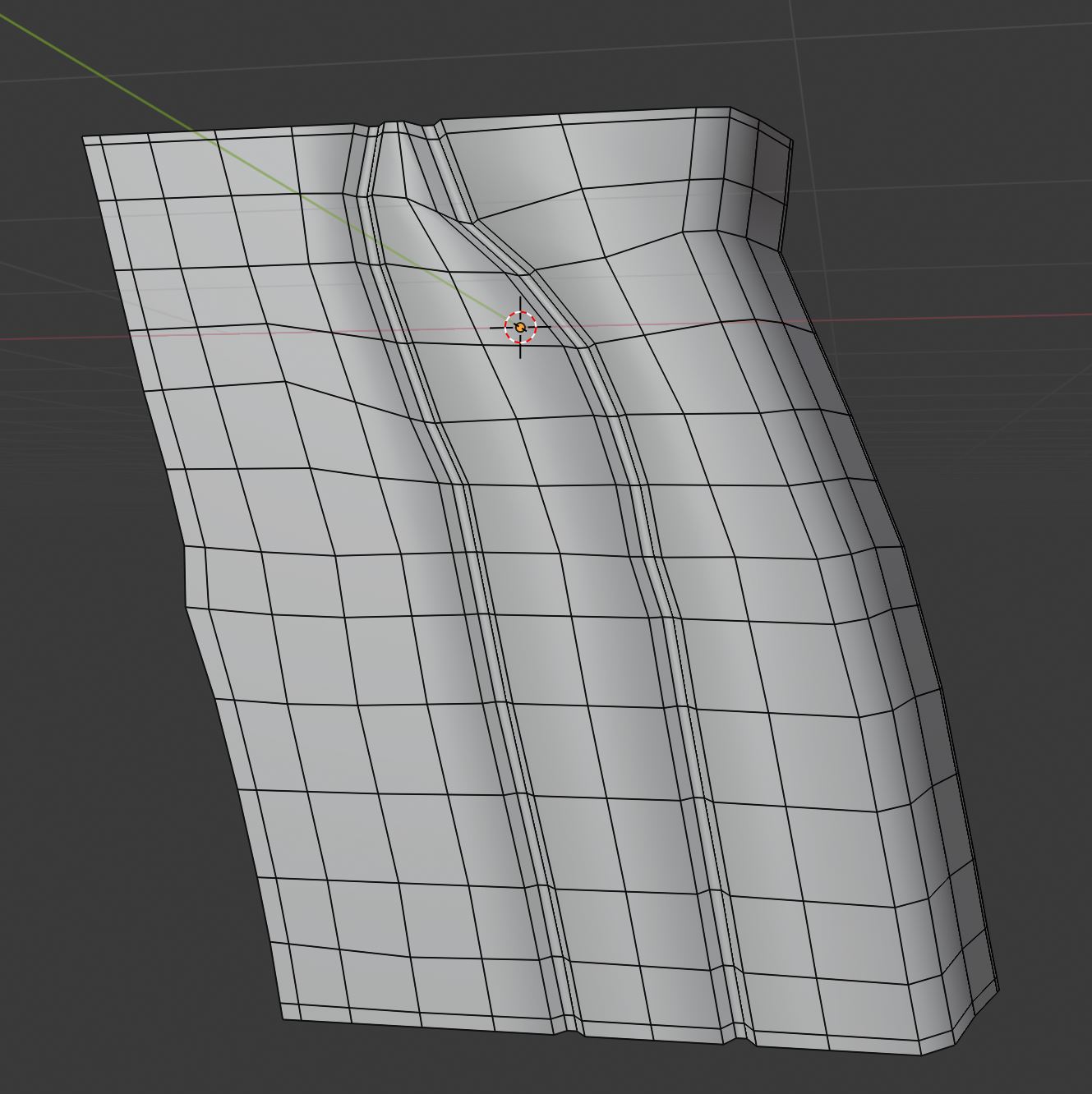 I have exaggerated the groove on here so you can see it and added a subdivison surface x2. Done quickly but if you take your time I am sure you will do a good job. 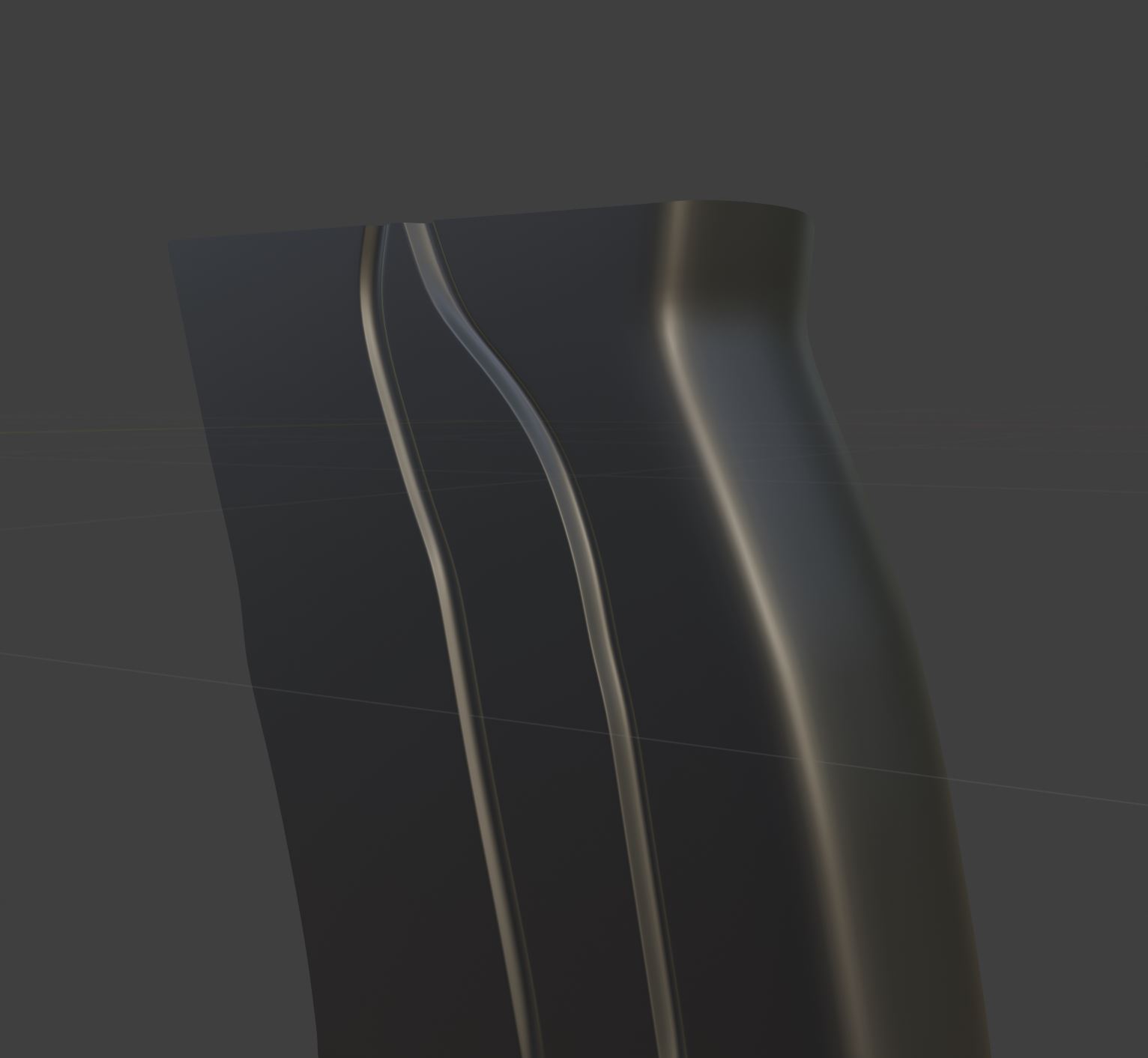 Not the answer you're looking for? Browse other questions tagged mesh geometry bevel or ask your own question.

1
Interpolate mesh surface between curves
0
Simplifying specific faces
0
Beveling with a bad topology of an imported model ?
2
How to properly smooth edge
1
Adding simple details to a model symmetrically
1
How do i obtain a more rounded edge
1
Extruding svg-created curves with holes