How could I transform the vertices of my mesh to appear in Perspective view, as it does in Orthographic view?

I have a model that appears to have fake depth, where objects in the geometry are smaller rather than further away. That said, the model looks fine in orthographic view (if you position the camera correctly) and appears there as it actually should appear in perspective view. 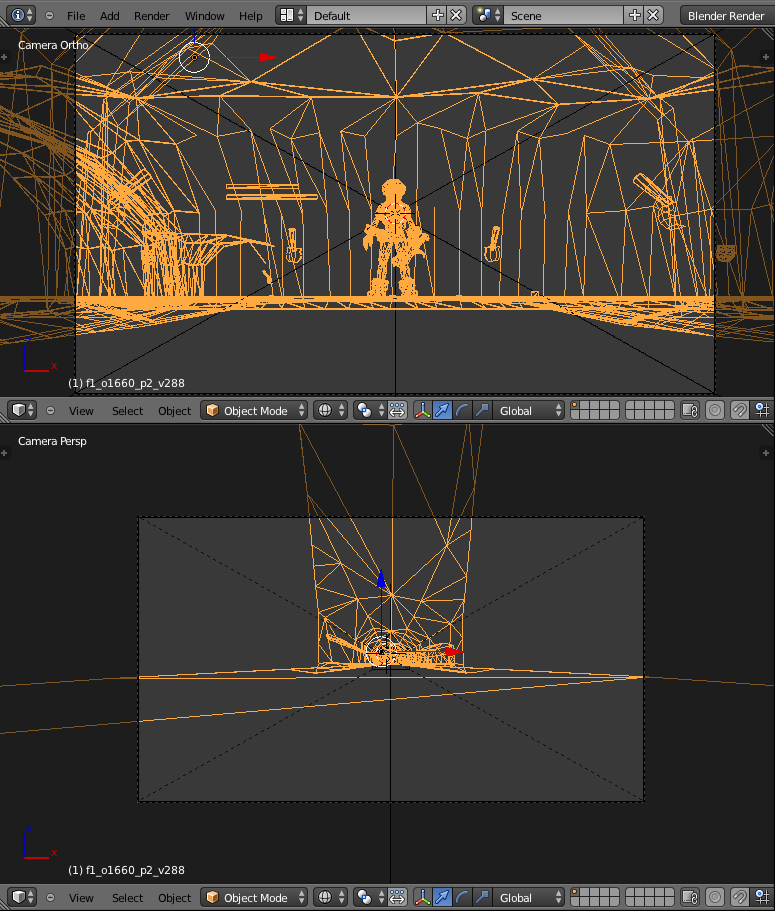 In perspective view, of course, the objects that are "further" away are smaller than they are supposed to be when you get close to them.

How could I transform the vertices of my mesh to appear in Perspective view, as it does in Orthographic view? As far as I know, it would involve: 1) translating each vert along the x and z world planes as they appear on the perspective screen coordinates to line up with the same vert on the orthographic screen coordinates. 2) scaling the mesh along the world y, eyeballing it until everything starts to look correct.

The first step is where I find myself rather stuck. Anyone got a way to tackle it?

This sounds like a job for math, python, and bmesh. You'll have to have an understanding of the mathematics behind orthographic and perspective projections so that you can compute replacement coordinates for the vertices.

Once you have the formula, you can write python which iterates through the vertices of the mesh and rewrites their coordinates. Something like this:

Expanding on Mutant Bob's answer (he provided the code, I'm commenting from the math point of view):

Suppose you have the first situation (you have two points of view). Then the task of recreating the original positions of vertices in space would be pretty demanding (depending on whether or not we can biject vertices from one scene to another easily), but theoretically possible to pull off.

Suppose you have the second situation (one point of view and the depth buffer info). Then the task of recreating the original positions is fairly trivial (you might get lost in the equations, but the algorithm itself is pretty straightforward).

But: unfortunately, even though you have a 3D scene, it's essentially "2D": you only have the "screen positions" of vertices stored in there and placed onto some plane that is parallel to the camera screen. As a result, you have only one point of view and that's all; no second point of view, no depth information.

The opposite operation to what you want to do is absolutely possible to perform, but what you're asking for is, sadly, impossible since the depth information is lost.

However! If your scene isn't completely flat (all vertices being on one plane), then you could, in theory, multiply it by an arbitrary factor along the axis of depth and then multiply the coordinates along the two other axes, the further you get from the camera position, the more the multiplication factor. However, it will be a very approximate solution (you'll have to eyeball it) and it will largely depend on how (if at all) the relative depth is preserved in your scene.

Not the answer you're looking for? Browse other questions tagged mesh 3d-view geometry or ask your own question.

3
How do you mathematically reverse a perspective transformation?

3
Navigate normally from camera perspective?
4
What are these items that are showing up in the viewport render
2
Viewport background images disappeared when .blend file closed and opened
1
Mesh is disappearing in Orthographic View? Is there in Perspective view
1
In Blender 2.8, can I reset 'My View' to the initial perspective used when a brand new project file is opened?
0
Vertices movement keeping view perspective, but not actually moving the vertices
0
Distorted image texture on curved plane