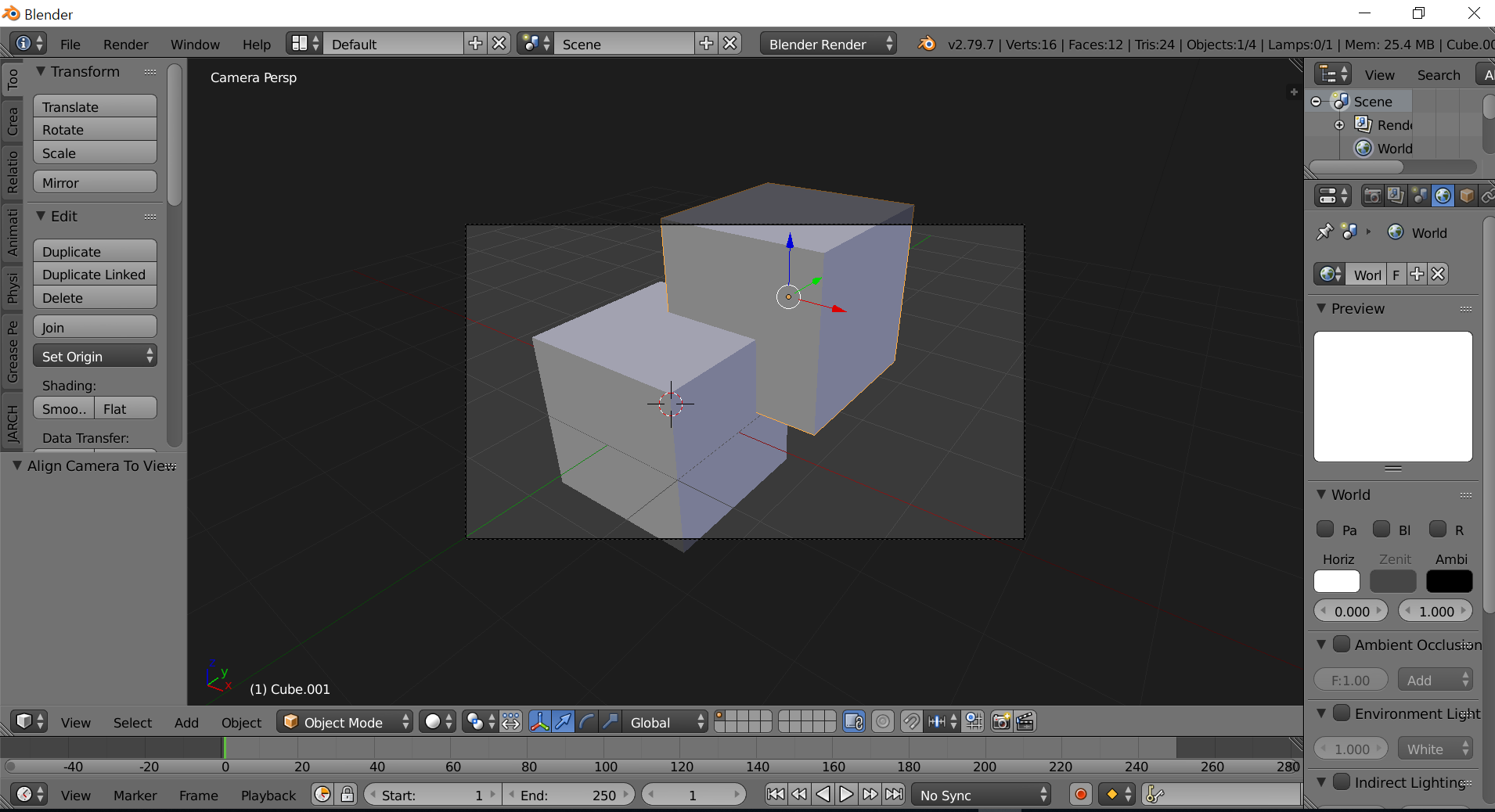 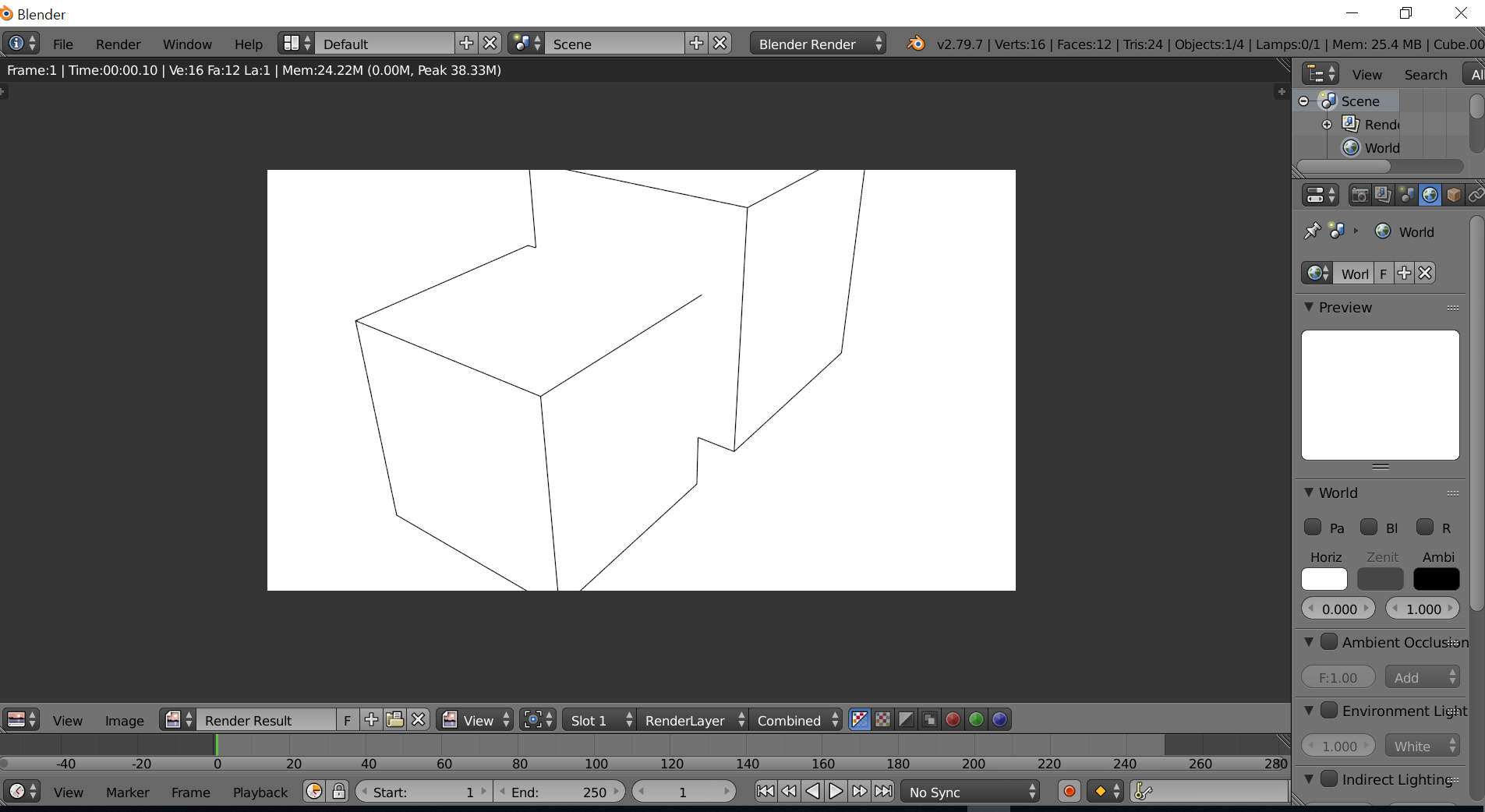 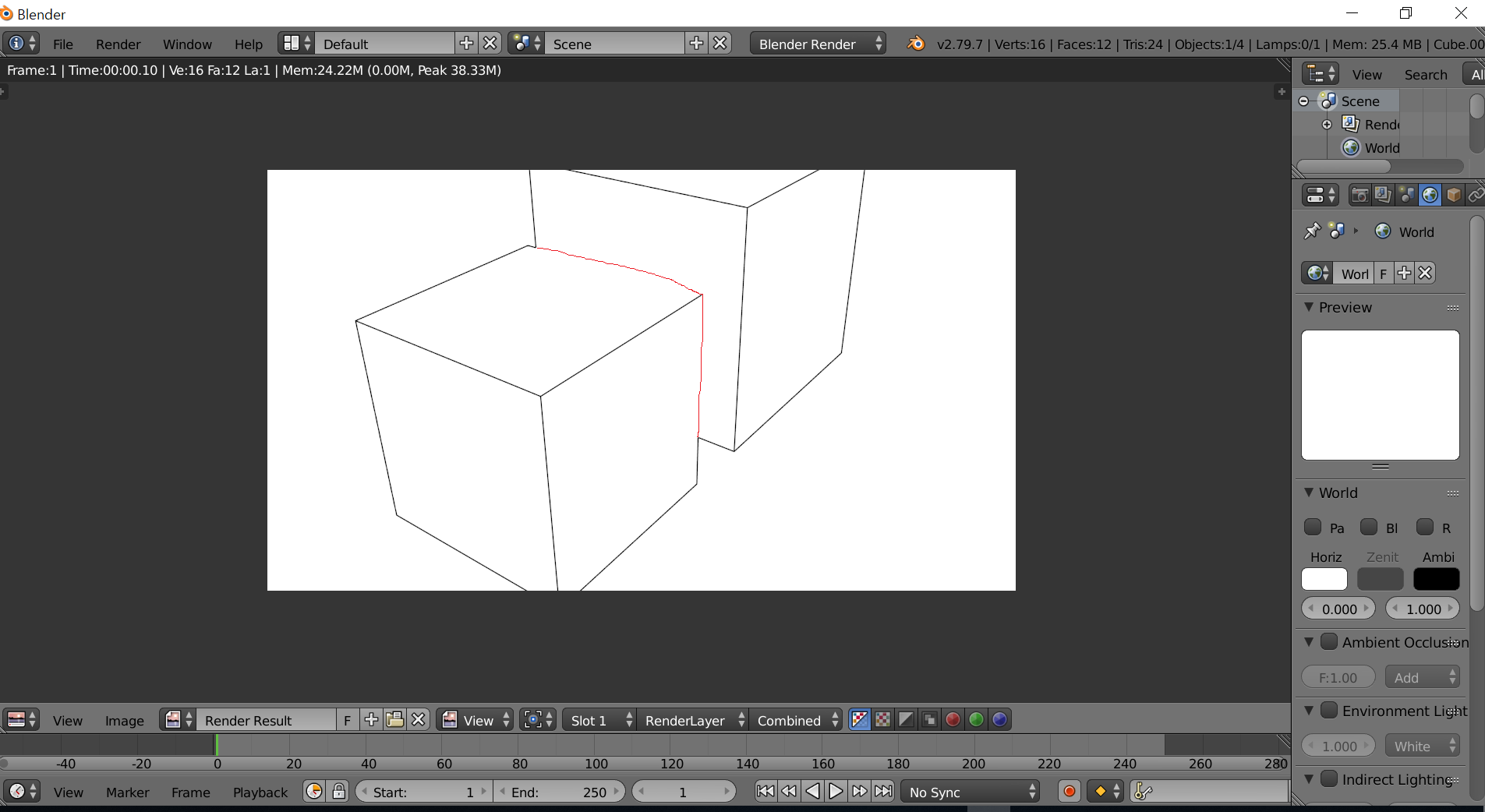 What's the easiest way to accomplish my purpose?(A lot of objects in my work are made in that way so resulting render image misses many overlapped edges. I tried to remake some object to reveal overlapped edges but I realized that remaking all objects is too hard to me.)

This is essentially the same method as @Rich Sedman's; he is passing a convolution kernel over an image to detect edges, 'by hand'. Whereas this is necessary in shader nodes, (if you are trying to kick the renderer into doing it,) in the compositor, various edge-detection filters are provided: 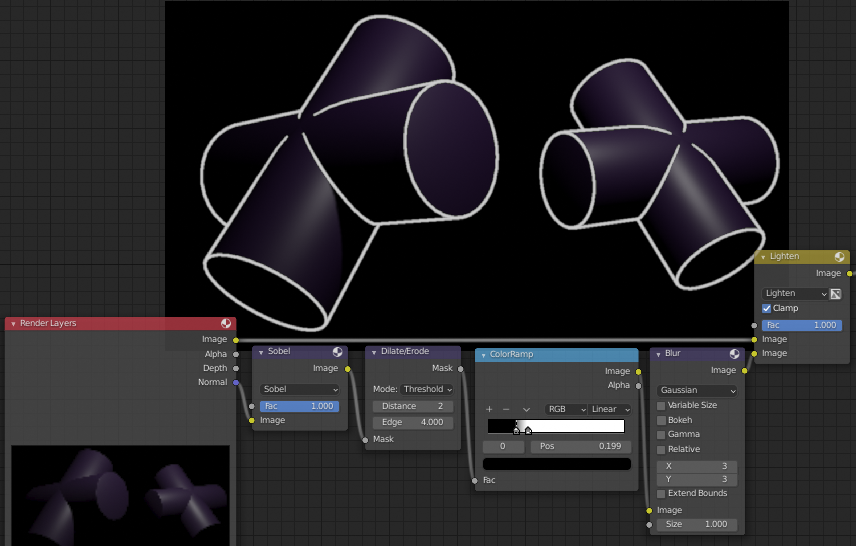 Here, a Sobel filter is passed over the Normal output, to detect edges in it. You may tweak the other nodes to your desired outcome: here, the Dilate fills some gaps, the Color Ramp converts to B/W, with a soft threshold, and the Blur antialiases the result, somewhat.

As in Rich's answer, the same edge-detection could be applied to other discriminators, such as depth, depending on your scene.

This isn't possible (as far as I know) using freestyle. However, it is possible to fake the effect in the Compositor by looking for sharp changes to the rendered Normal and/or Depth.

To achieve this, we need to compare each point in the render with a neighboring point and highlight those areas where the Normal or the Depth varies by a significant amount between those points. This can be acieved with a node group as follows :

Here we take the Depth and Normal as inputs and translate each by a specified X and Y (multiplied by the desired Thickness) - this allows the current pixel to be compared with a neighbouring pixel.

For the Normal, the RGB Subtract node compares them and the result is separated into its components and its overall magnitude calculated (as 'sqrt(r^2+g^2+b^2)'). If the result is greater than a Threshold we have found an edge.

Similarly, the Depth is subtracted from its neighbour and the Absolute result compared with a second Threshold. The two results are combined using the Maximum.

In order to avoid artifacts from features in particular directions, we can sample neighbouring pixels in different directions. This can be achieved with multiple node groups with different X and Y offsets - one above, one below, one to the left and one to the right (ie, (0,1), (0,-1), (-1,0), (1,0)) and the results combined as follows : 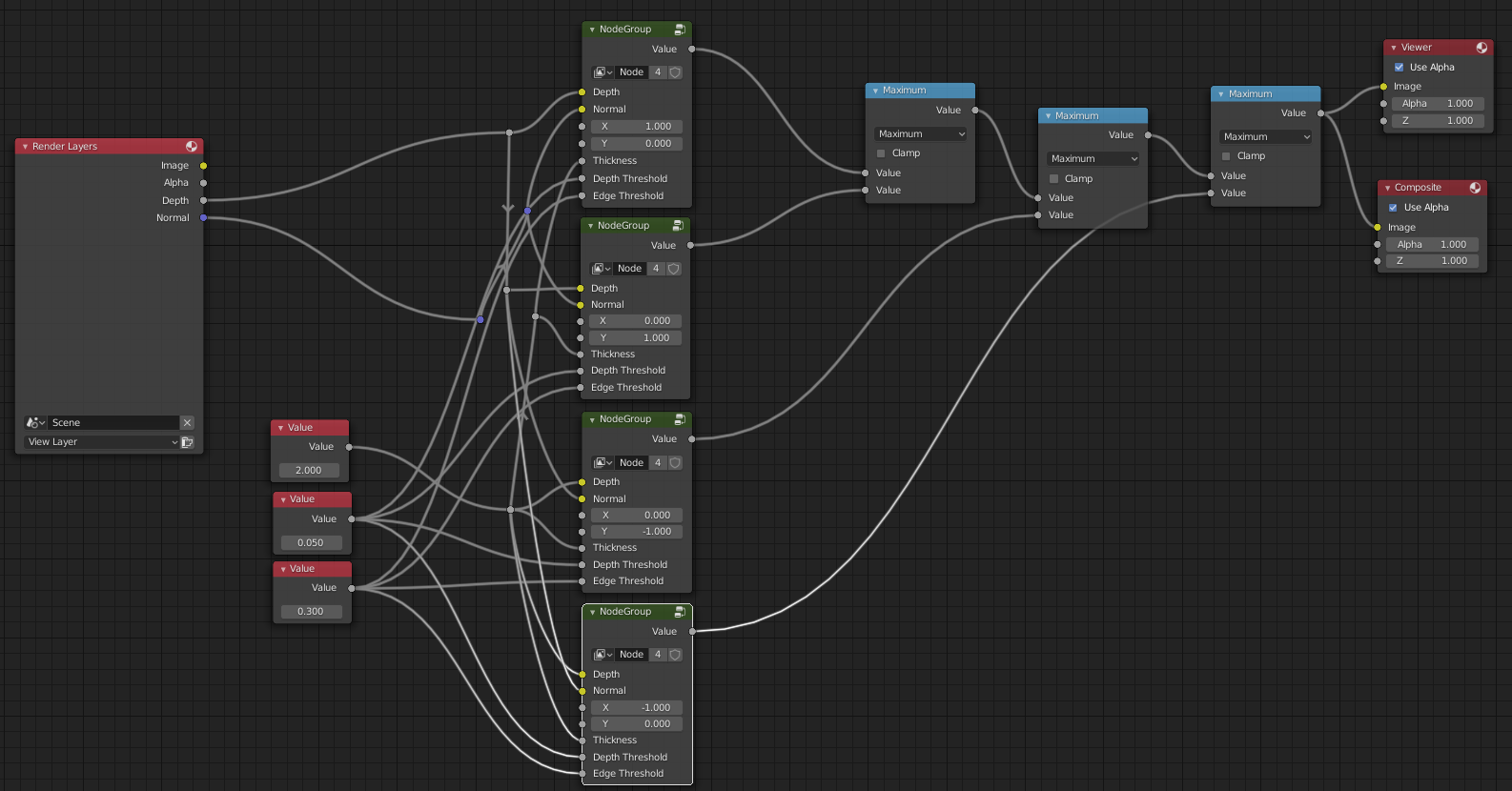 This can produce the following results (after tweaking the line thickness and thresholds) : 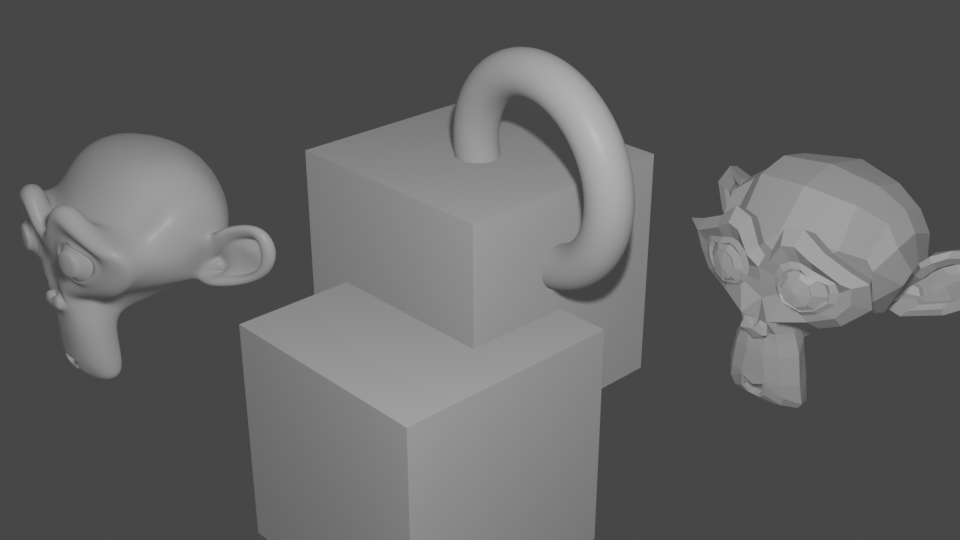 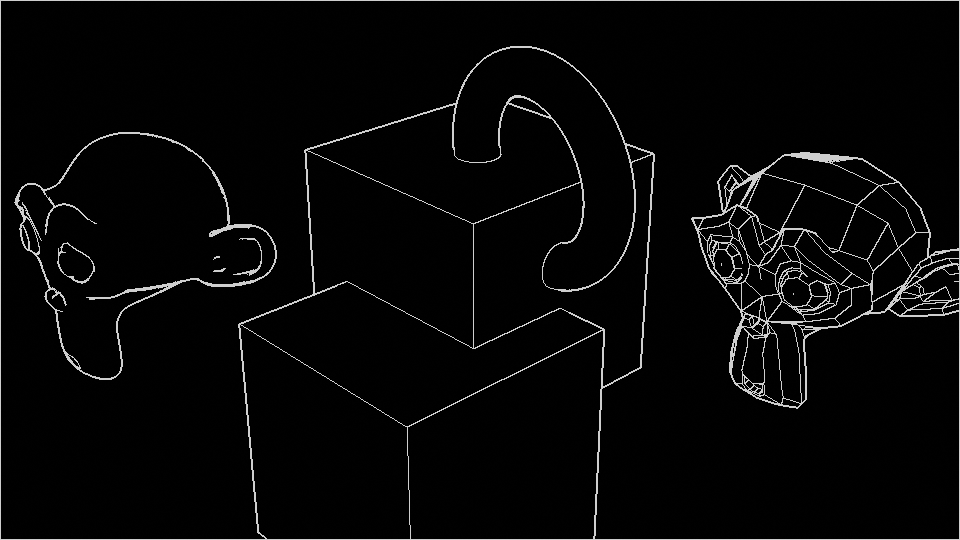 It is now possible to:

Create a blank Grease-Pencil object in scene, and give it a Line Art modifier, which includes the option to detect intersections.

It needs a camera to match to, and will exist as geometry in the scene, which will be continuously modified according to camera-angle. It can be rendered without the modifier's target objects. 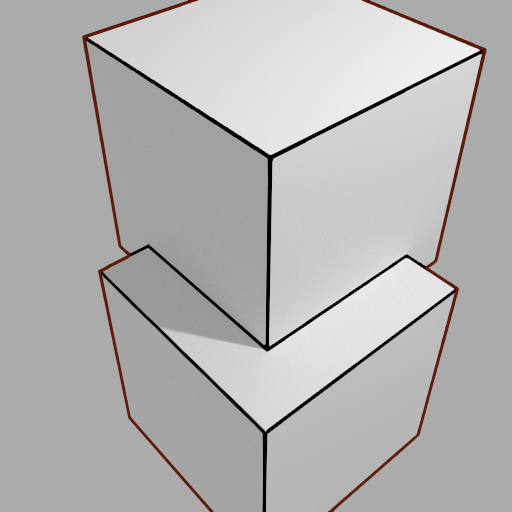 5
Freestyle with multiple objects
1
is there a way to freestyle the trasnparent images?

2
Straight Lines with no Face, Freestyle
2
2.7 How to make an anime looking object
6
How to make an object transparent to the freestyle pass?
3
During render can I render freestyle lines, then re-insert them back into the scene so other objects may interact with them during their rendering?
0
How to get more control over Freestyle external contour lines
1
Can Freestyle Visibility accuracy be improved?