Does anyone know how to show the cut parts? I used a modulo operation with random coordinates and rotation for each cell, but when I try to randomly move them I get some parts of the texture getting cut, but I would prefer them to overlap. 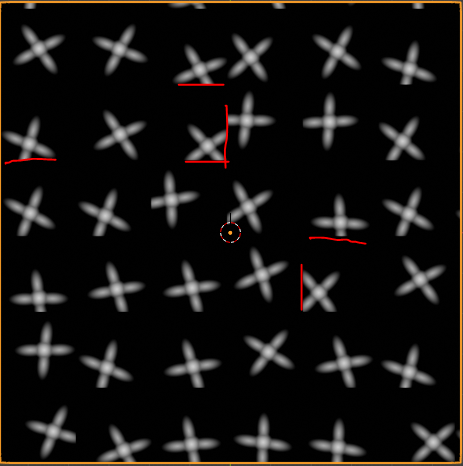 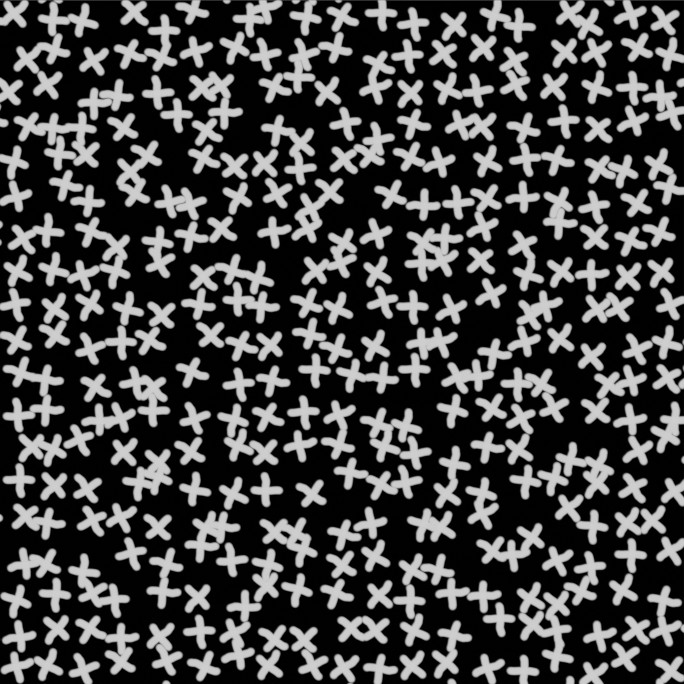 The idea is to work at a given scale, so that the pattern will repeat and using a random (noise) at this scale (each cell will correspond to a random color).

Now imagine the result as a grid, the idea is:

What is done for each of these 8+1 cells is to offset and rotate the pattern with the random values, transfer the result in the central cell and look if it's inside the central cell surface.

Globally, this is some kind of 3x3 convolution and in consequence, the node setting is the repetition of 9 same figures: 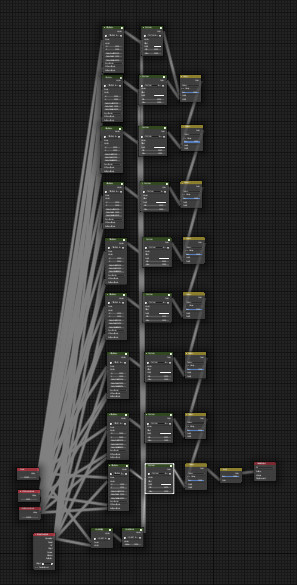 If we go into more details: 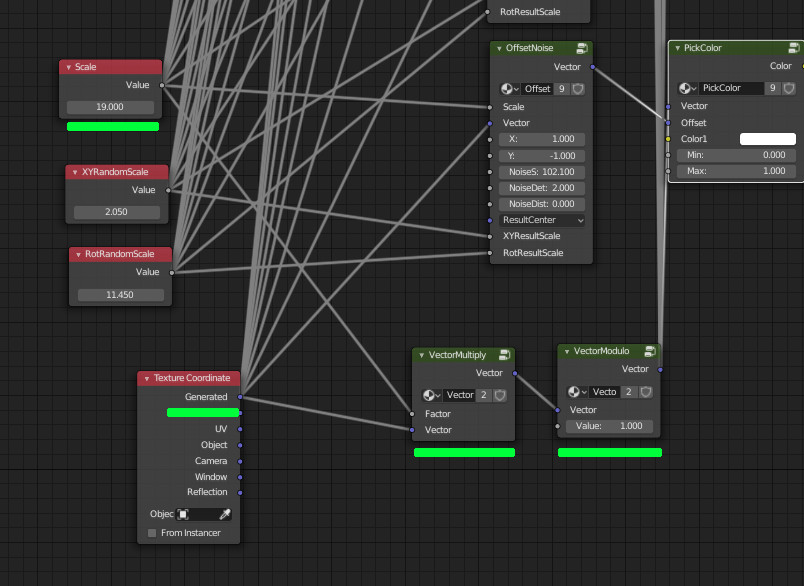 On the other part, we have 9 node groups on the left, which are here to calculate the randomness. It takes into account the input parameters and incorporate a noise texture. 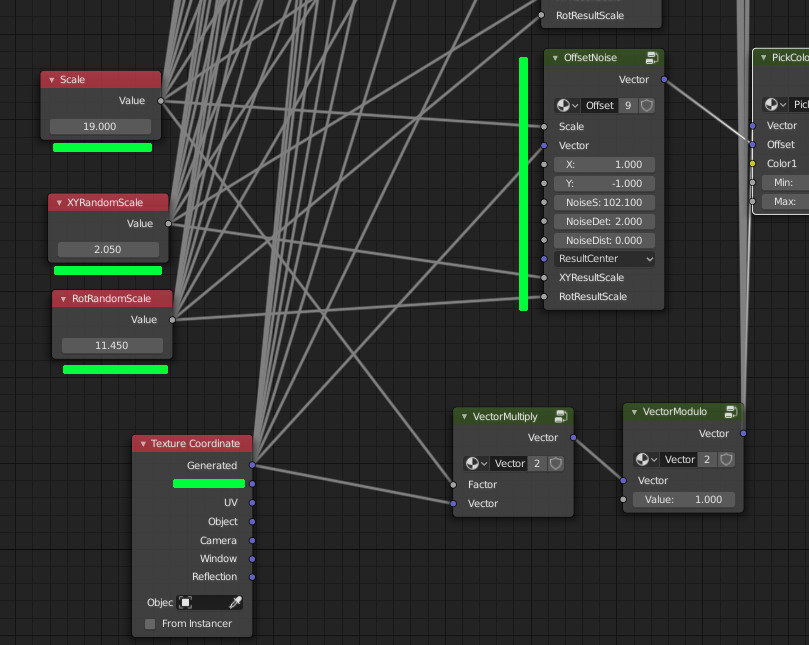 The goal of this node group is to result in the wanted random value, offset(ed) by the coordinate of the (X, Y) pairs in input.

The NoiseDiscretize goal is to ouput random value at the scale we want. The result is centered (we want output between -1 and 1).

Back at top level, we now have the random deltas we want + the cell to draw in at the good scale. We now mix that to get the color for each cell from the center cell point of view. PickColor node group does that: 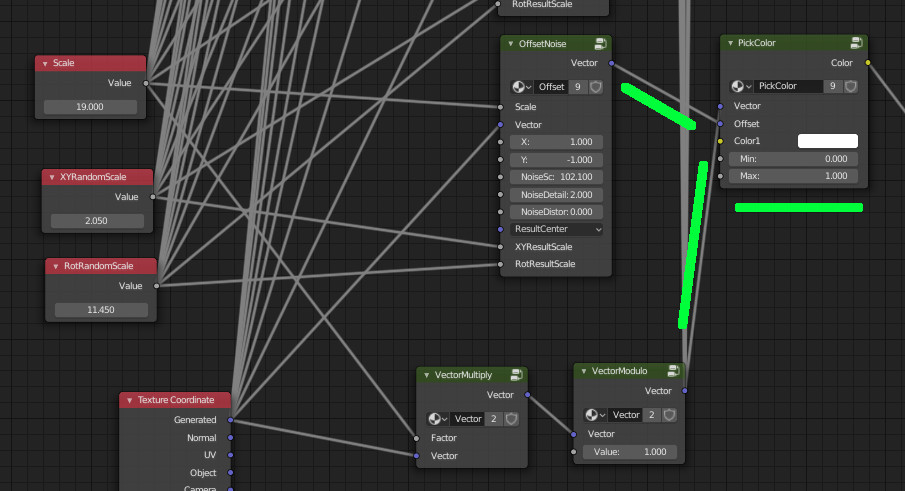 Inside of it, we have:

Important: the pattern texture node interpolation is set to closest (if not border lines may appear).

Finally, the nine results are mixed by a mix rgb node using the darken operation at 100%. 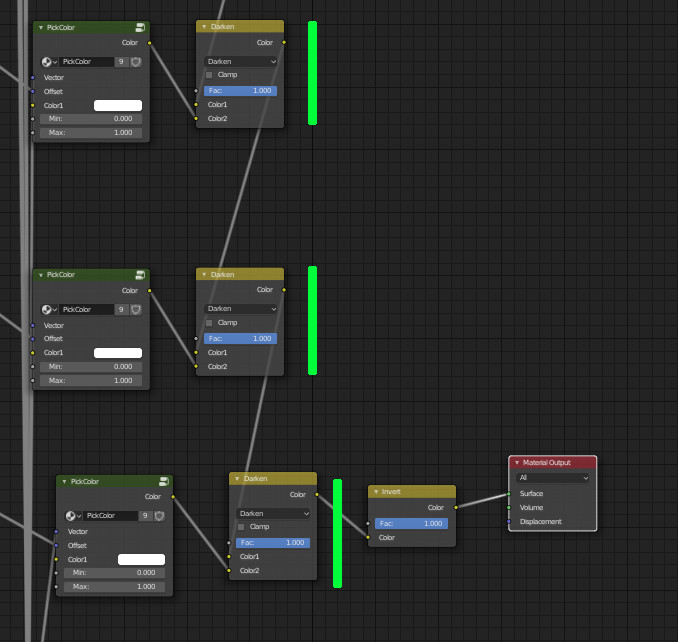 Note: I feel this kind of setting painful. But the bad is really that we need to duplicate the input pattern texture, as there is no way to have it as a parameter. And so the setting can not be reused easily.

But maybe another answer will solve this problem?

Not the answer you're looking for? Browse other questions tagged nodes shaders procedural vector-mapping vector or ask your own question.

19
Randomly populating procedural shape (or Image Texture) in Cycles
12
How can stipple shading be replicated in Blender?