Is it possible to specify a complex rendering area in Blender?

I am trying to render a complex object (suppose this is a torus). The area occupied by the object itself is much smaller than the area of the object bounding rectangle. I only need to render this object.

The surrounding scene is not important to me (besides its effect on the object lighting). I try to adjust the object material and I often have to rerender the scene.

It takes a lot of time, so I want to throw out the rendering of all the excess. I know about rendering boundaries, but this only works for a rectangular area, which is not effective for a torus. Can I somehow define the rendering area including only interesting object?

My guess how I could do it:

Unfortunately, I did not find the standard functions and plugins for this. Maybe someone has already solved a similar problem and knows the solution.

You could put your model on a renderlayer and then model a plane with a custom shape hole on another layer and then tick exclude and mask for that layer on the model-layer.

EDIT: All of this is surely possible in 2.8, but I haven't really used it yet so I'm not sure about where to find all these settings. 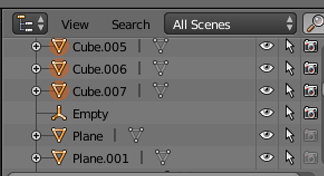 So in this case, the cubes are getting rendered, but the planes aren't. They still affect the movement of some objects in my scene though, since I'm using cubes to bounce off of the planes, but I don't want the plains to be visible.

Also, try turning off your background by opening the film tab under render options and tick the 'transparent' box. Make sure you've set your output data to PNG, so the final render will have a transparent background.

56
Render just part of a final image from Cycles?

2
Is it possible to specify texture dimensions for Cycles nodes
6
How to make an object transparent to the freestyle pass?
6
How can I specify an area to render based on mask image in Cycles?
0
A light rendering problem or an export problem?
1
Blender rendering transparent images
0
Area Lights disappearing when rendering image
0
Shadow Catcher object causing brightness issues in scene
0
Blender Not Rendering Properly