I am very new to learning Blender so please bare with me on this one! I've read similar questions and tried the suggestions without success!

I have two actions I want to merge together using the NLA editor. When the second action starts, it jumps locations. I did not make these actions, I am just trying to put them together.

Thank you for any advice you can offer!!

You character jumps because its position to its origin has changed between the 2 actions.

It depends what you mean by merging actions in the NLA Editor. You can merge 2 strips to make one in the NLA but if you just want your character to have a coherent animation (i.e. have the same position at the beginning of the second action than the one at the end of the first action) you can do it this way:

Now keep in mind that it seems like you don't have any transition between the 2 animations, maybe it's better to create one. Also, instead of keeping two separate actions, you can choose to select all the animations of the second action in the Dopesheet and paste them at the end of the first one. You won't need 2 strips anymore as you've copied the content of the second one in the first one, and you'll have to correct the position the same way as explained. 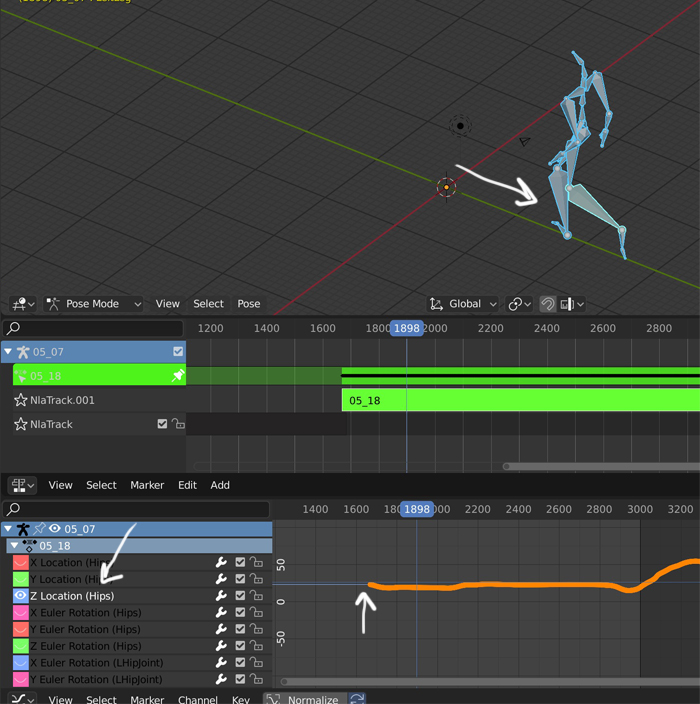 Not the answer you're looking for? Browse other questions tagged animation transforms keyframes actions or ask your own question.

0
How can I use a single action to trigger animations in multiple objects?
2
Translate Z Location of object for every frame?
1
Animate location and scale relative to starting point
0
Creating actions based on local location/rotation/scale of an object