How can stipple shading be replicated in Blender?

I have had this idea for a little while, using Blender to simulate traditional stipple shading. I have gotten an OK effect using a mix shader with ambient occlusion as a factor to spread a stipple texture in the cracks and crevices of objects. The main problem with this is that all the dots are evenly spaced, and the dots fade out while on a real stipple shaded painting the dots are very closely spaced towards dark areas and get sparser as it gets further away from those areas (see attached image). I'm pretty stuck on how I could produce this effect, I have been thinking there might be some way to control the clustering of a voronoi texture using ambient occlusion, but that's just an idea. Does anybody know of a way to simulate stipple shading? Please advise.

If you don't know how to replicate stipple shading, but you feel like you have some ideas or tricks you think could be useful, please comment, I'll try them. 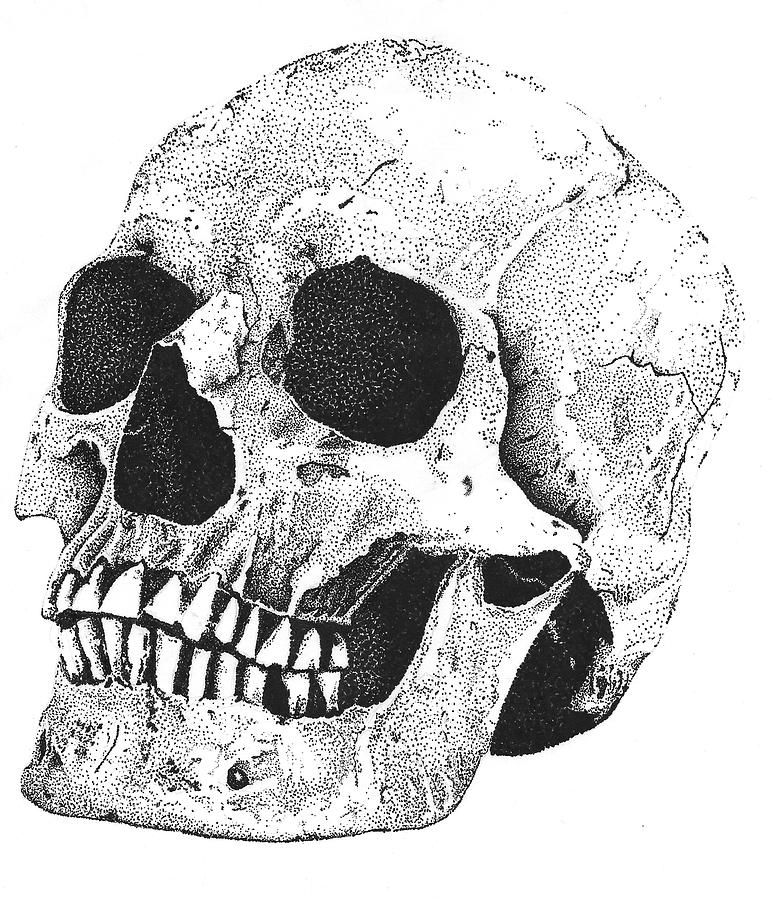 This is a procedural shader-only approach, which could be adapted to taste. It's based on capturing the light-response of a surface as a color, and deciding on a set of threshold values in its brightness. For each threshold, darker tones are uniformly textured with procedural dots. The resulting textures are layered over one another, so tones below the minimum threshold get all the layers, the second-lowest all but one, and so on.

Create a 'Stipple Layer' node-group which will texture everything below a given brightness with procedural dots.

Suzanne's eye trough a single one of these groups would look something like this, depending on the settings: 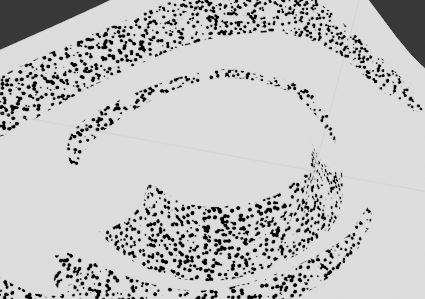 Now to layer them up. 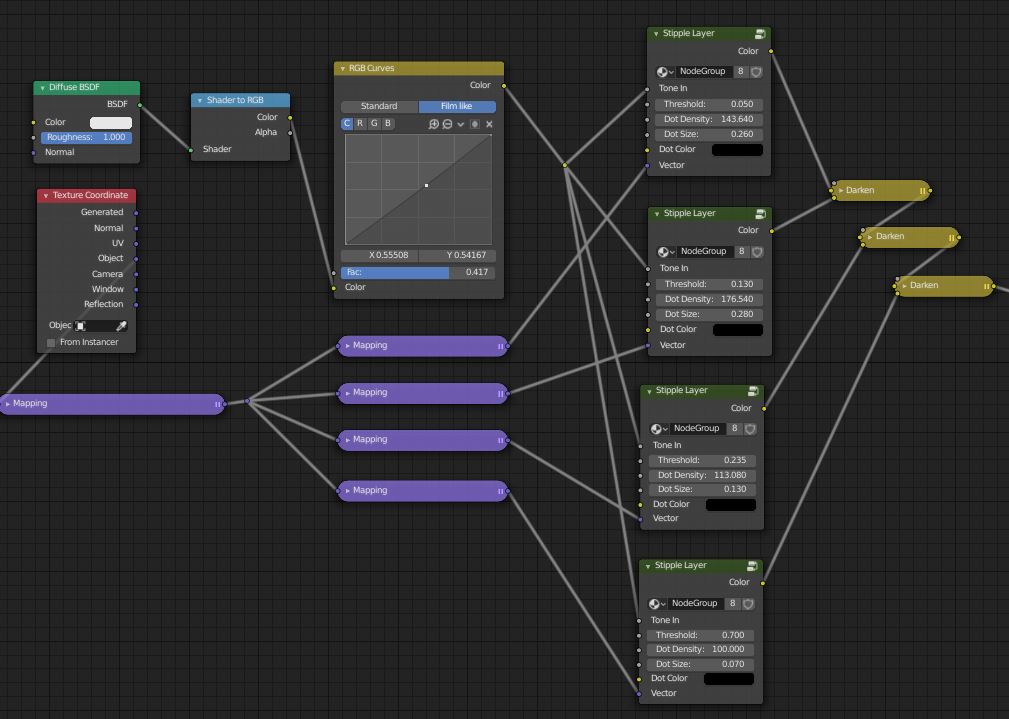 The result of 4 layers: 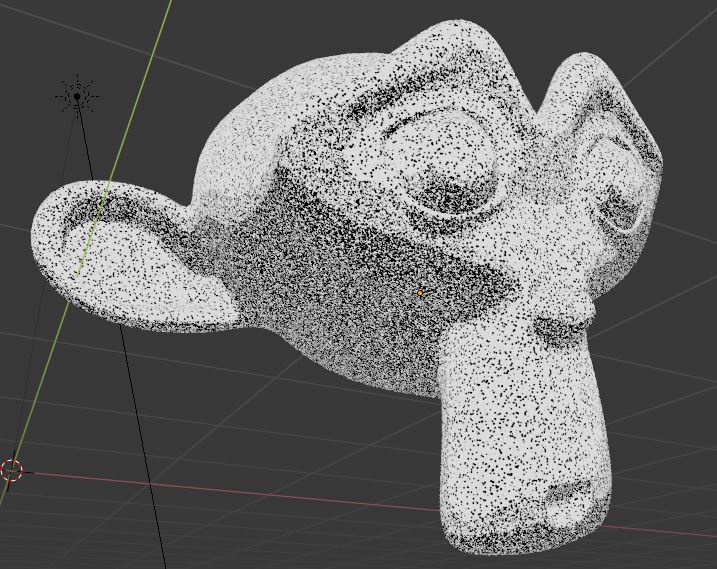 By tweaking the dot sizes, densities, and thresholds, the boundaries between the layers can be disguised quite well. You can add an Ambient Occlusion shader to feed a layer, and intensify crevices, if you like:

You could also for example, split out your own R,G,B, and (probably) brightness channels to do a home-brewed color separation... lots of options.

The Dot Size and Dot Density entries interact: If you adjust one, you have to adjust the other to compensate. You could perhaps automate that relationship? : I tried a simple division - it wasn't quite linear, and wound up being easier to adjust by hand.

Edit: I've expanded the group a little to include more options:

These allow the possibility, for example, of negative layers (white dots out of black). 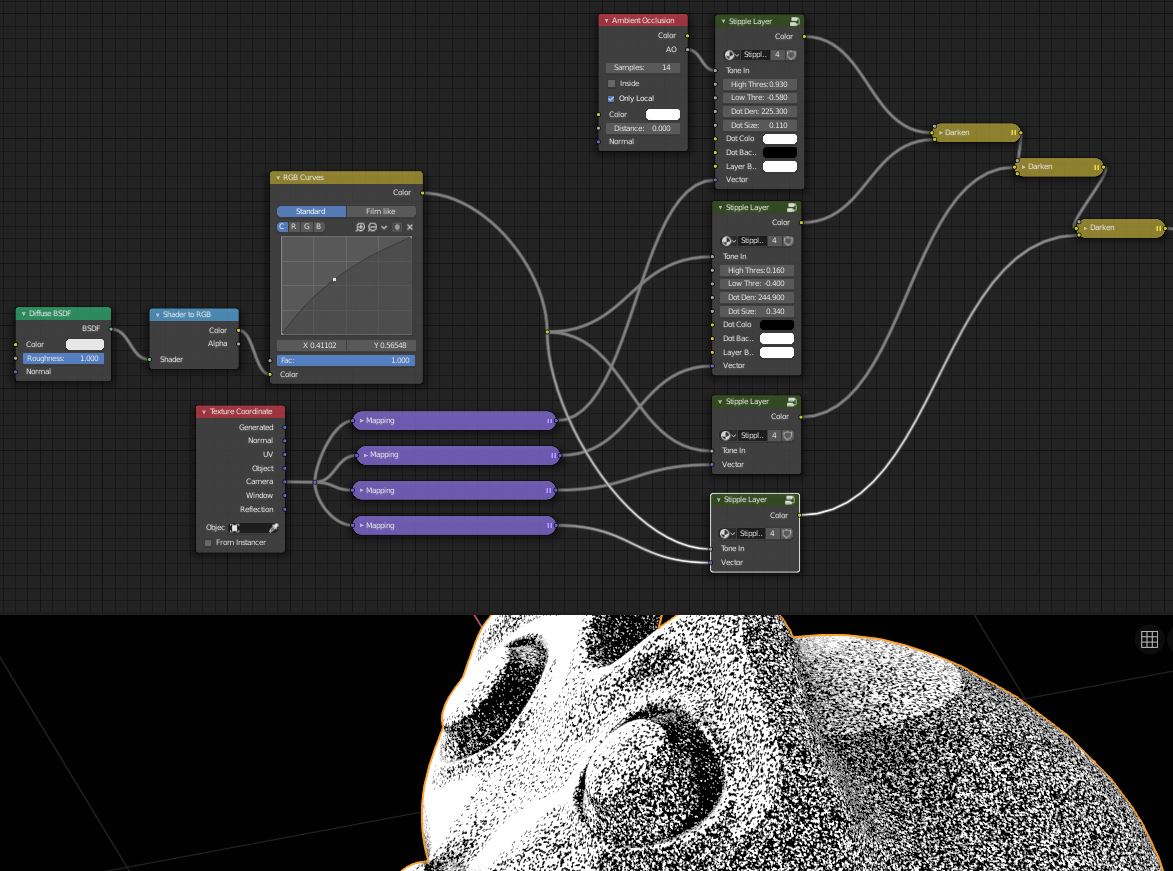 Here's my take on this - for what it's worth. This solution is quite similar to Robin Betts' answer but making more use of the other Veronoi properties (the additional 2nd, 3rd, 4th closest cell distances and colours, available at Blender 2.8) in order to avoid having to 'layer' multiple textures and to use the Cell color to hide some of the 'points'.

The nodes used for this are as follows : 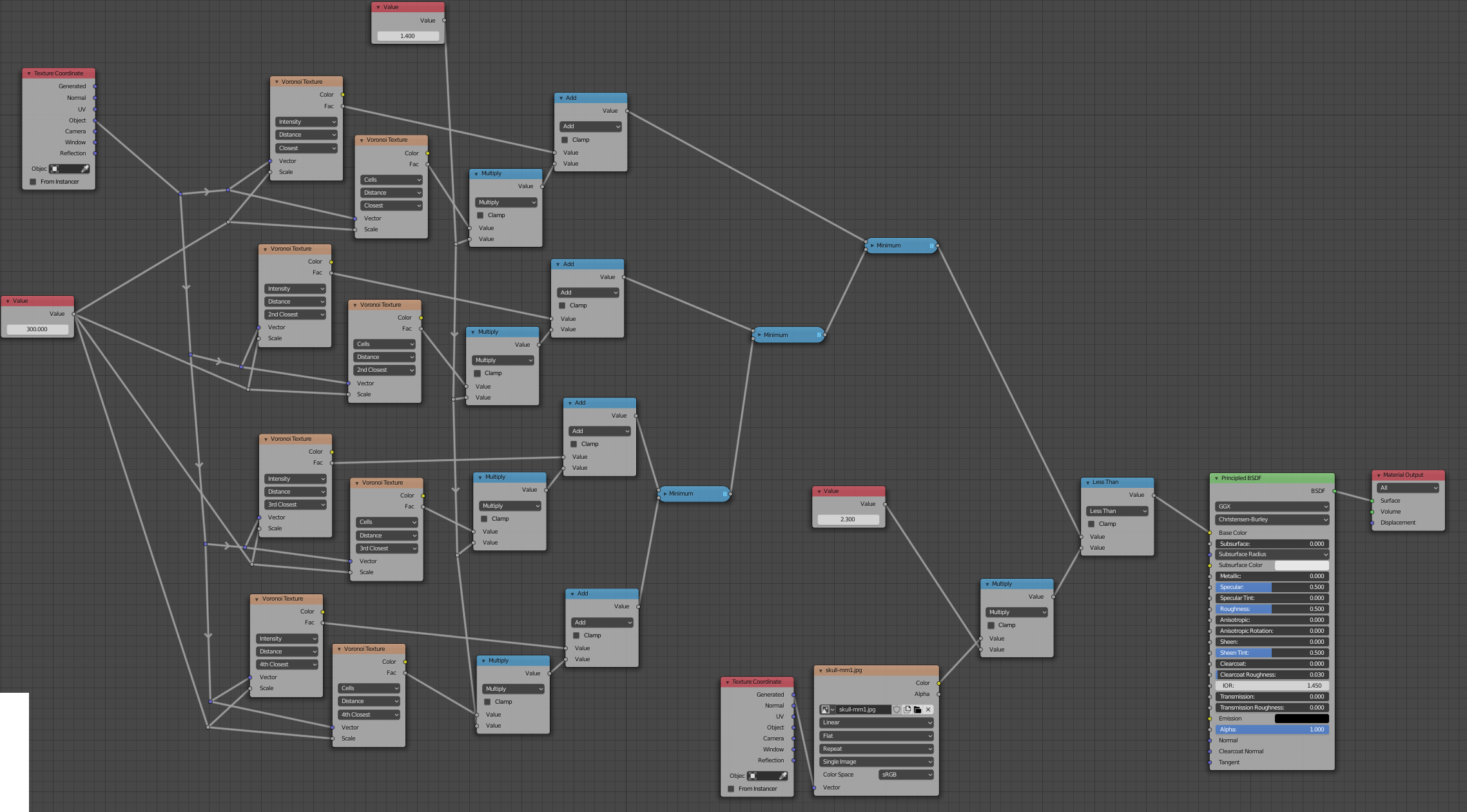 Note how there are 4 pairs of Voronoi Texture nodes. Each pair has one set to Intensity (to get the distance to the centre of that cell) and the other set to Cell to get its color. Each pair is set to a different cell centre (Closest, 2nd Closest, 3rd Closest, 4th Closest) so as to get the properties of the closest cell (the one the sample point is within) and the three adjacent cells. By combining the Intensities (distances) we can get the minimum distance to any of those cells, and this allows us to effectively have "overlapping" cells since the 'circles' are no longer limited to the edges of the individual cells. The 'Color' of each cell is combined with the 'Distance' so as to be able to randomly offset each cell - so that when we use the Less Than to determine if we're within one of the 'stipples', we effectively "delay" some of the cells from appearing, allowing the density to be adjusted (by changing the input to the Multiply nodes).

The Less Than nodes compares the point from the image with that of the distance to the closest cell (after the random variation based on the cell color has been applied) to grow each cell based on that part of the image. 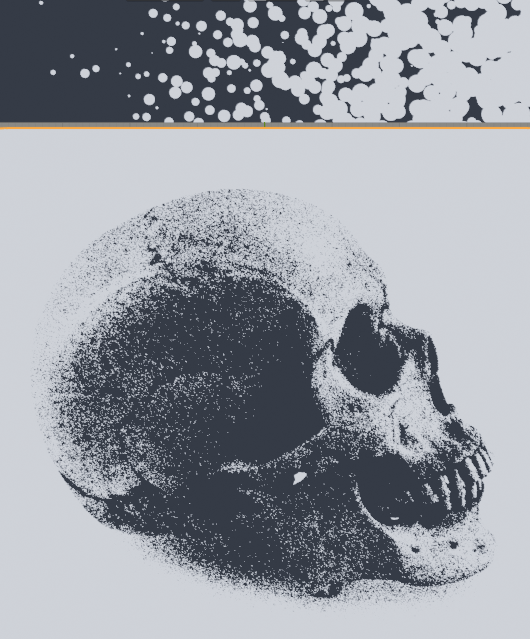 The node tree provides three inputs - the Scale (leftmost 'Value' node) to scale the 'dots'), the "brightness" (centre 'Value' node) to change the brightness of the image (varying the overall dot sizes) and the 'stipple delay' (changing how much the cell 'random' color affects the 'delay' before that particular stipple becomes visible). Vary those three inputs to get the desired effect.

The source image in this case was the followng skull image found from a quick Google search - but you could use any rendered image or use a technique to sample directly from the shader as described in Robin's answer. 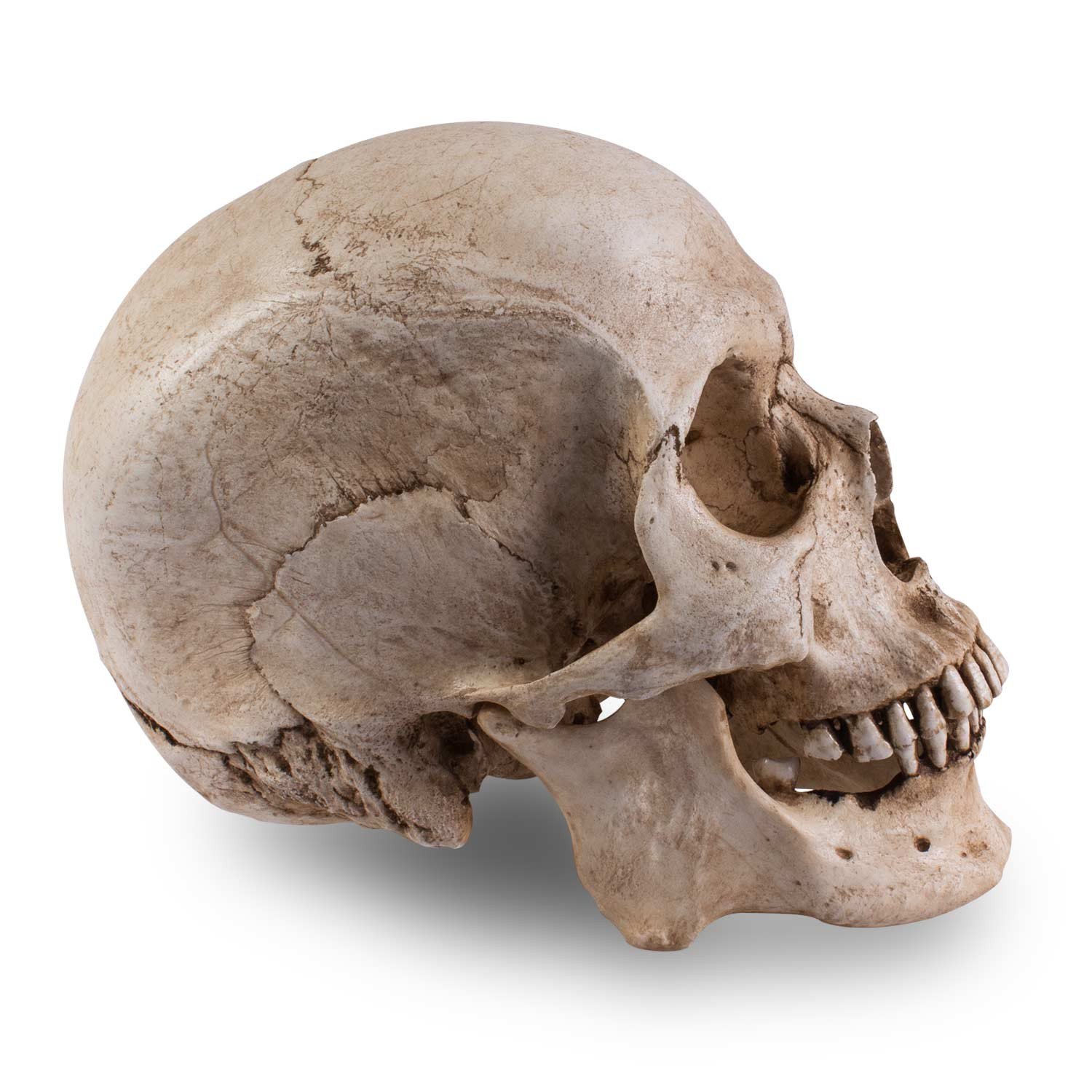 For completeness, here's the effect on a rendered Suzanne : 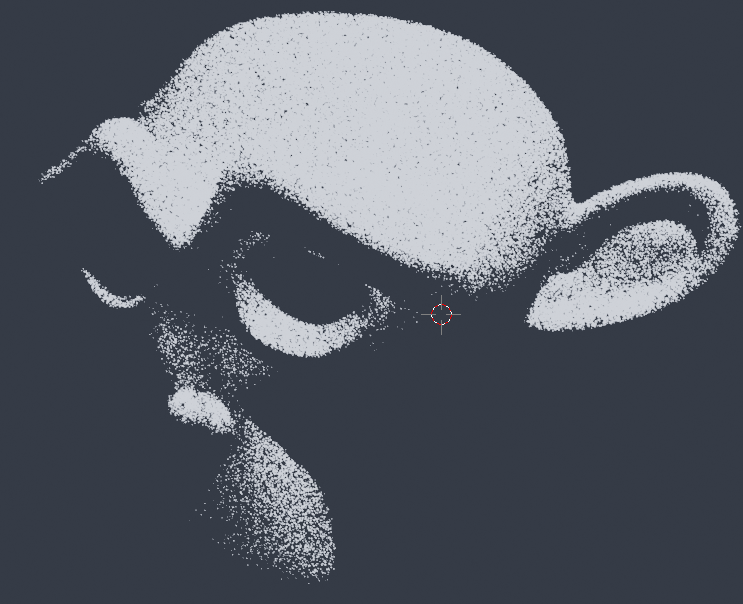 EDIT: Here's an example using ShaderToRGB to produce a 'live' shading (rather than from an image). I've also added in a Modulo function to cut the shading into distinct 'bands' similar to your original sample image. 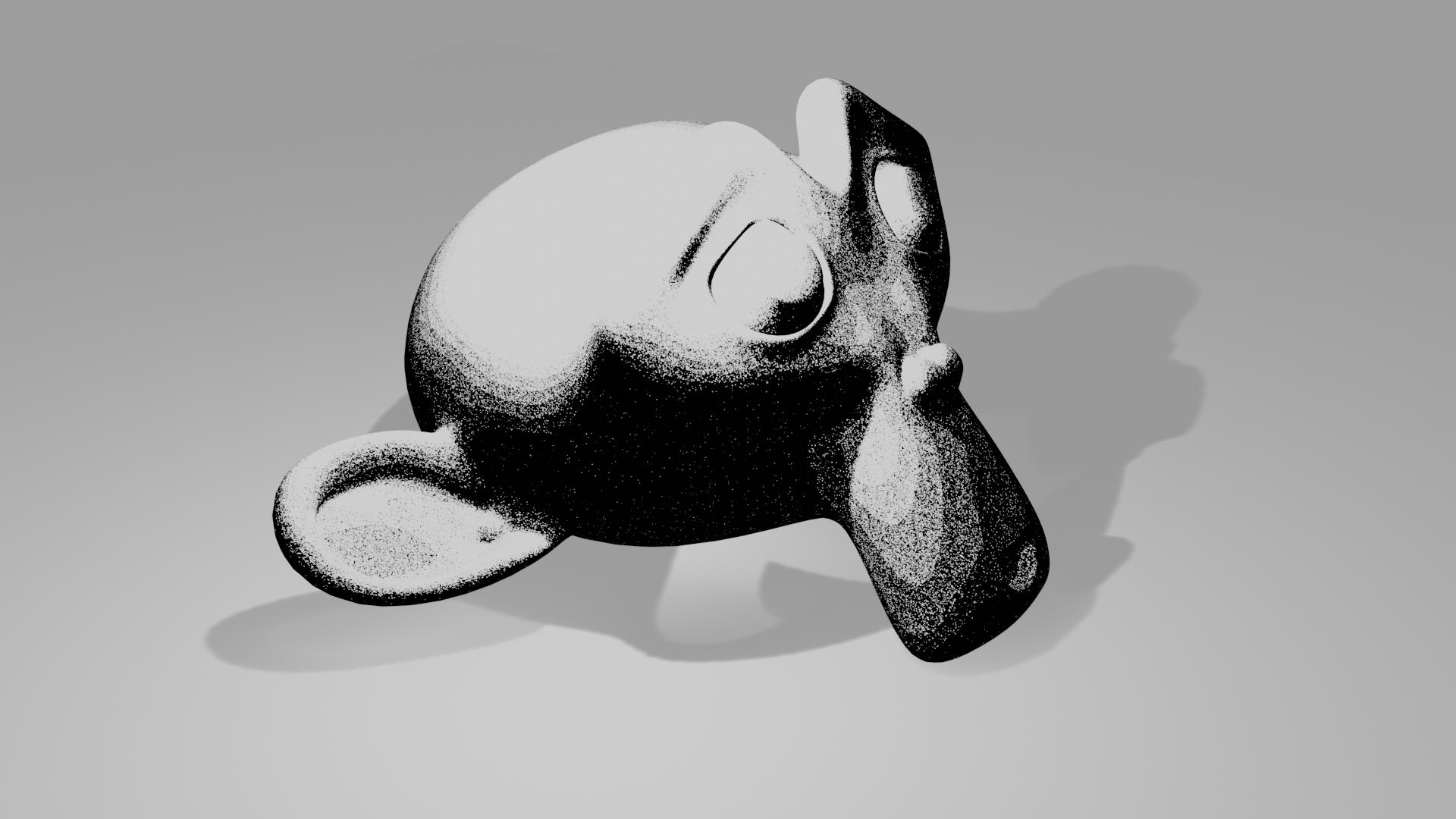 What I've tried to do here is:

The result is not perfect (especially I would like thinner dots more regular and more spaced) but if that can allow to go further for someone...

As said there is two main parameters to play with:

Rounds a value or a vector at a given resolution.

Just make copy of the input but facilitate the node placements

Captures the shadow value. It uses a diffuse shader convert to rgb then to black and white. This result can be scaled to a given input.

Can be either 'generated' texture coordinate or a variant based on 2 UV maps mimicking 3D coordinates. 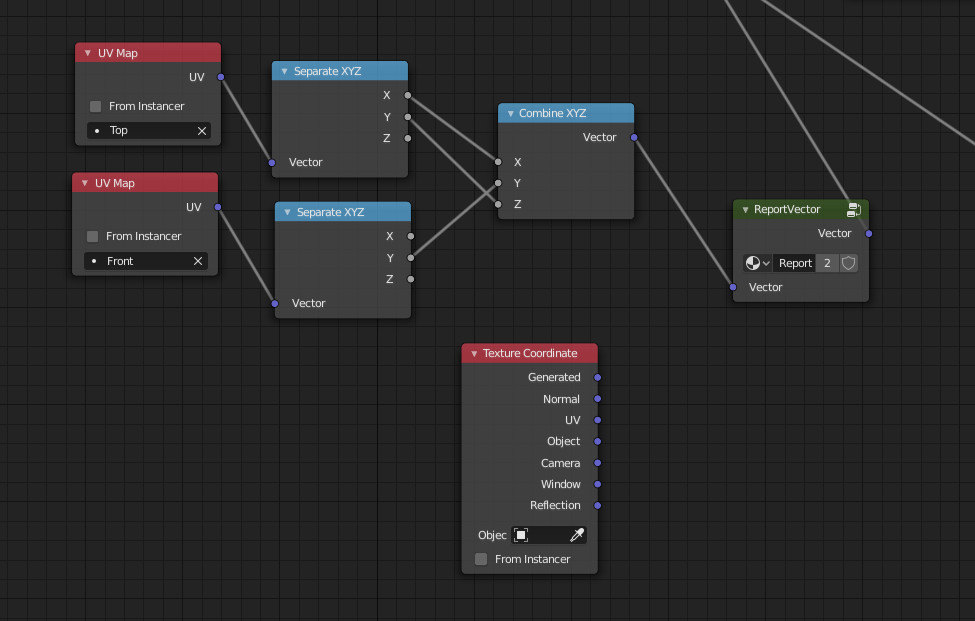 Some kind of shadow catcher which is inverted and set to a given resolution/samples (here 60).

The result is multiplied with the overall scale (upper part on the right) to feed the part that makes the dots.

And the result is also given to the shaders so that it can filter where the shadow (dots) is to be applied (bottom right part). This output is strictly constrained by the colorramp so that there is not grey output (as we want a 'pure' black or white result).

Take the input coordinate and samples it at the (shadow intensity * the scale). Then take a random value which is reported as a vector. 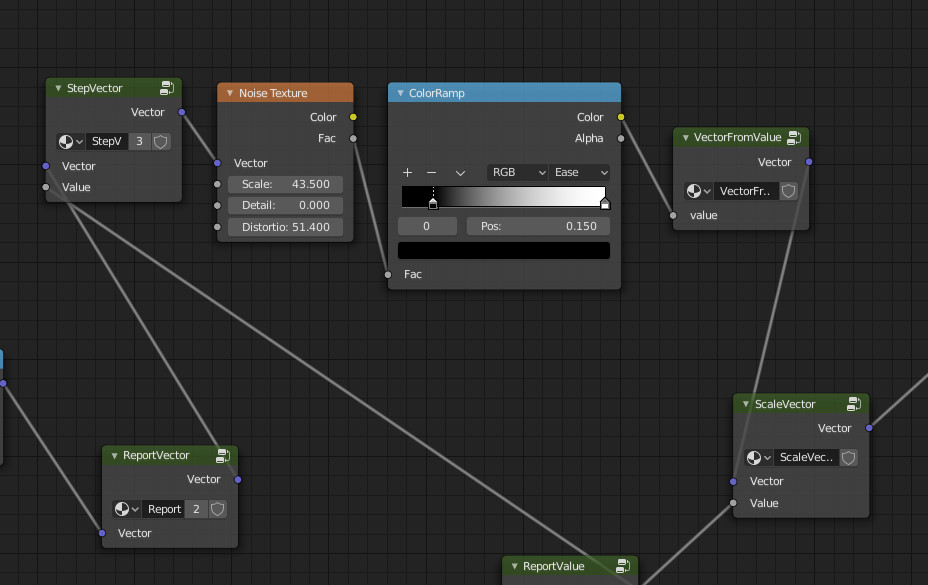 The 'dots' part calculates a radius from a sampled area (area size is 'scale' relative size).

The result is compared to a threshold radius ('resolution') which size it itself relative to the 'scale'.

The result is used to output black inside the dot and white outside. 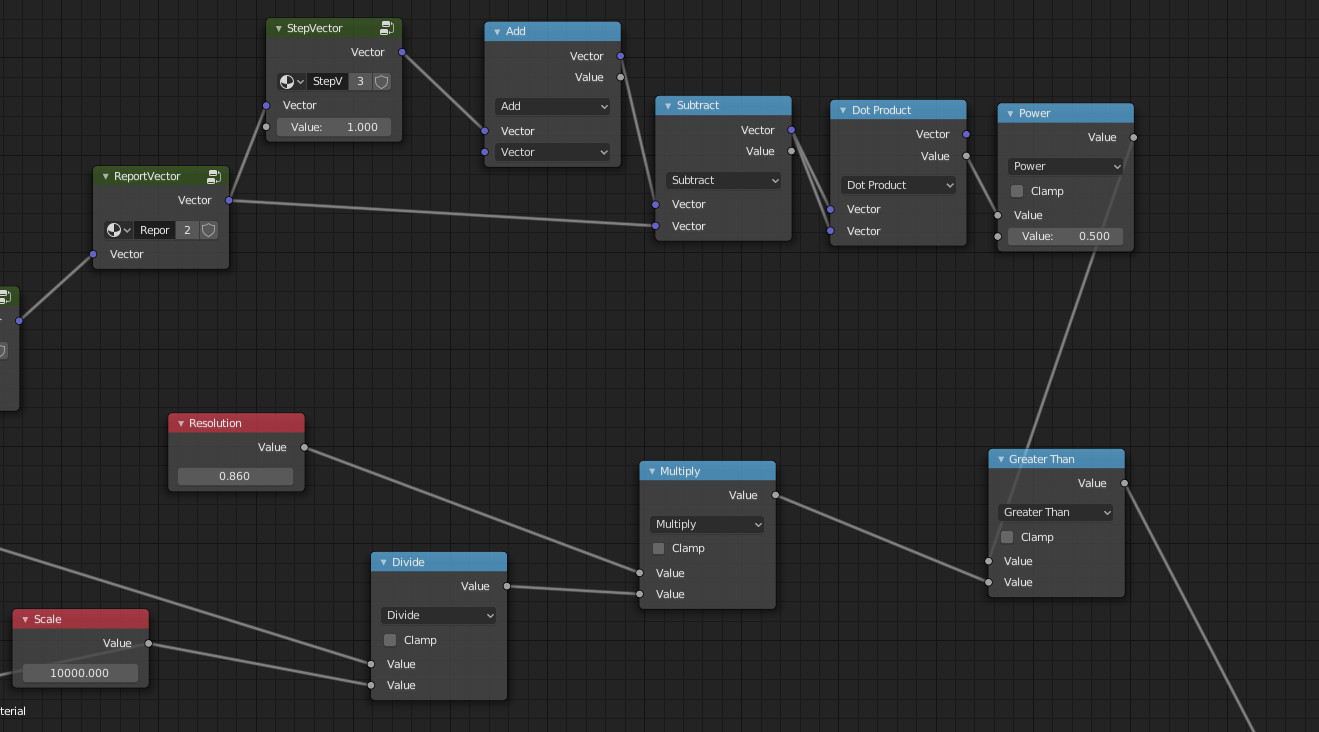 The shader is in two steps.

Make the dots using a mix shader factor from the 'dots' part above.

Make the 'shadow / non shadow' region using a second mix shader with a factor coming from the 'shadow' part above.

Only colors are used because we don't want additional shader effects here. 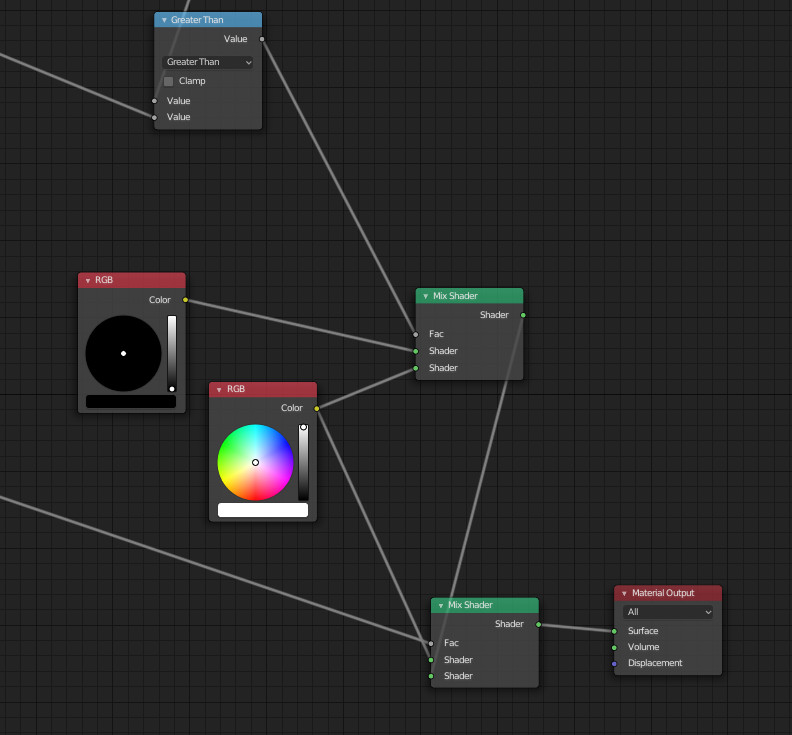 This alternative setting uses the same principles but replaces the 'dots' part above with the following setting using a Voronoi texture. 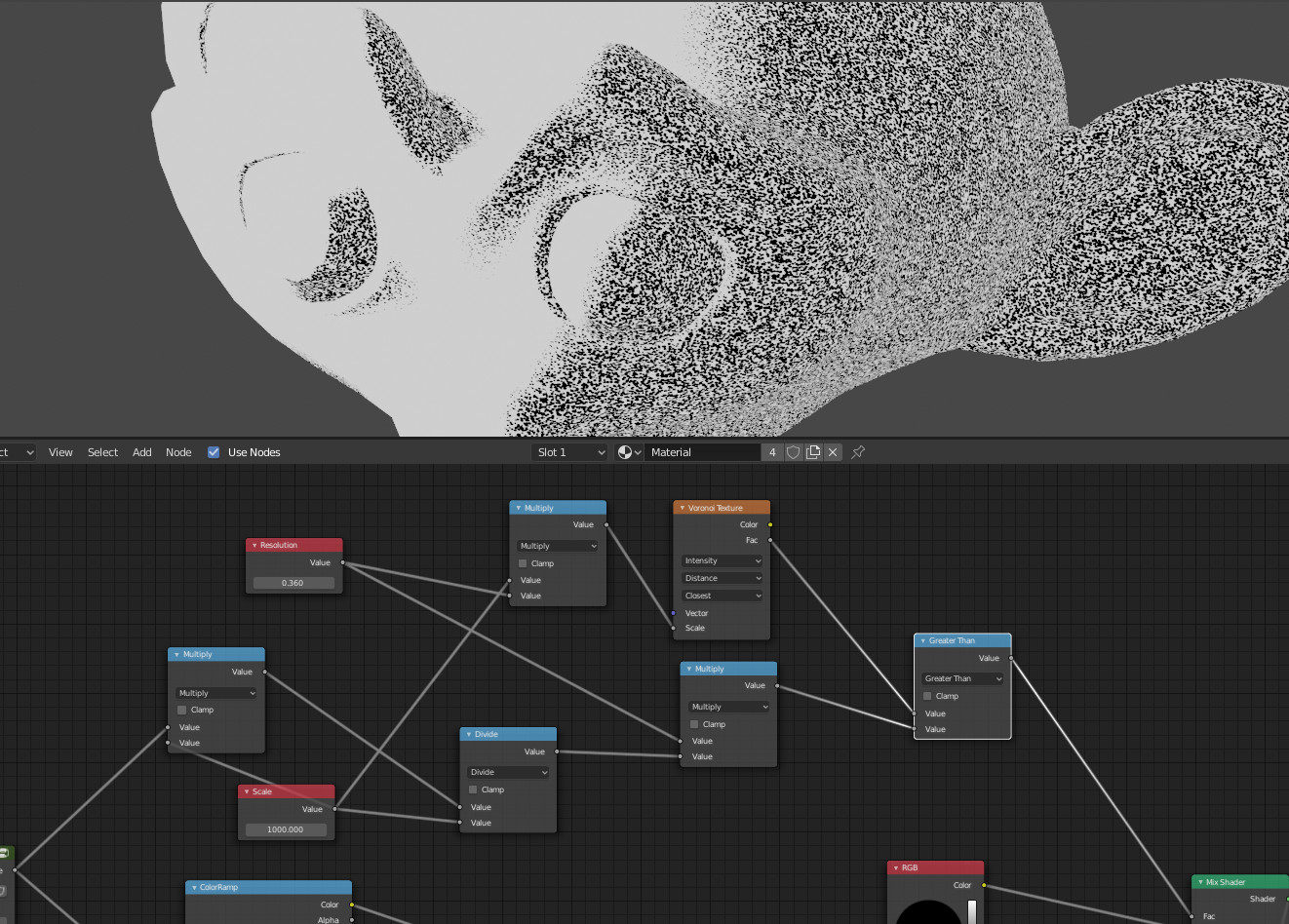 Depending on the 'scale' and 'resolution' value, it could allow result that are closer to the skull image in the question. 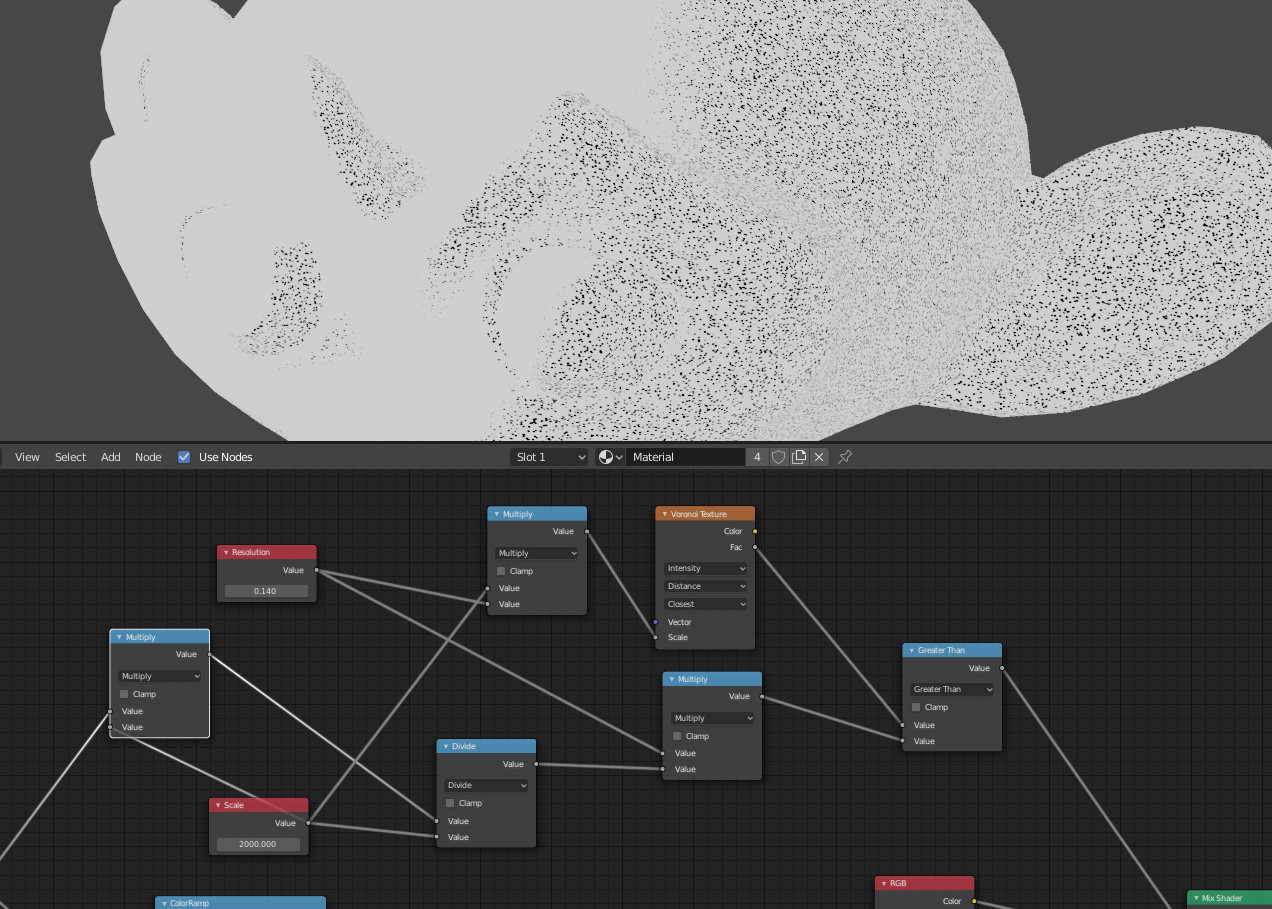 Another solution (from my previous one). It has the same disadvantages, but is really simple. I present it separately for clarity purpose. 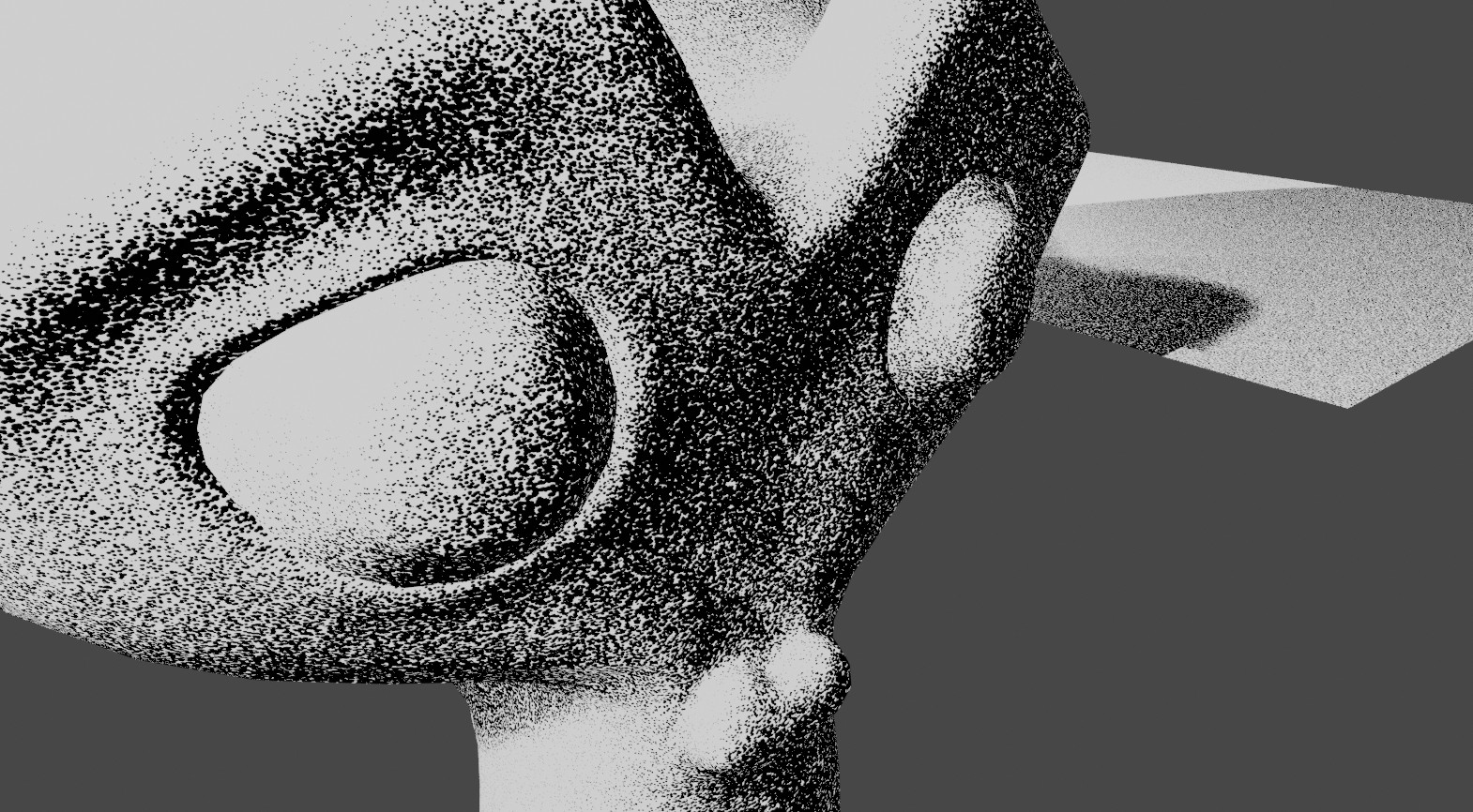 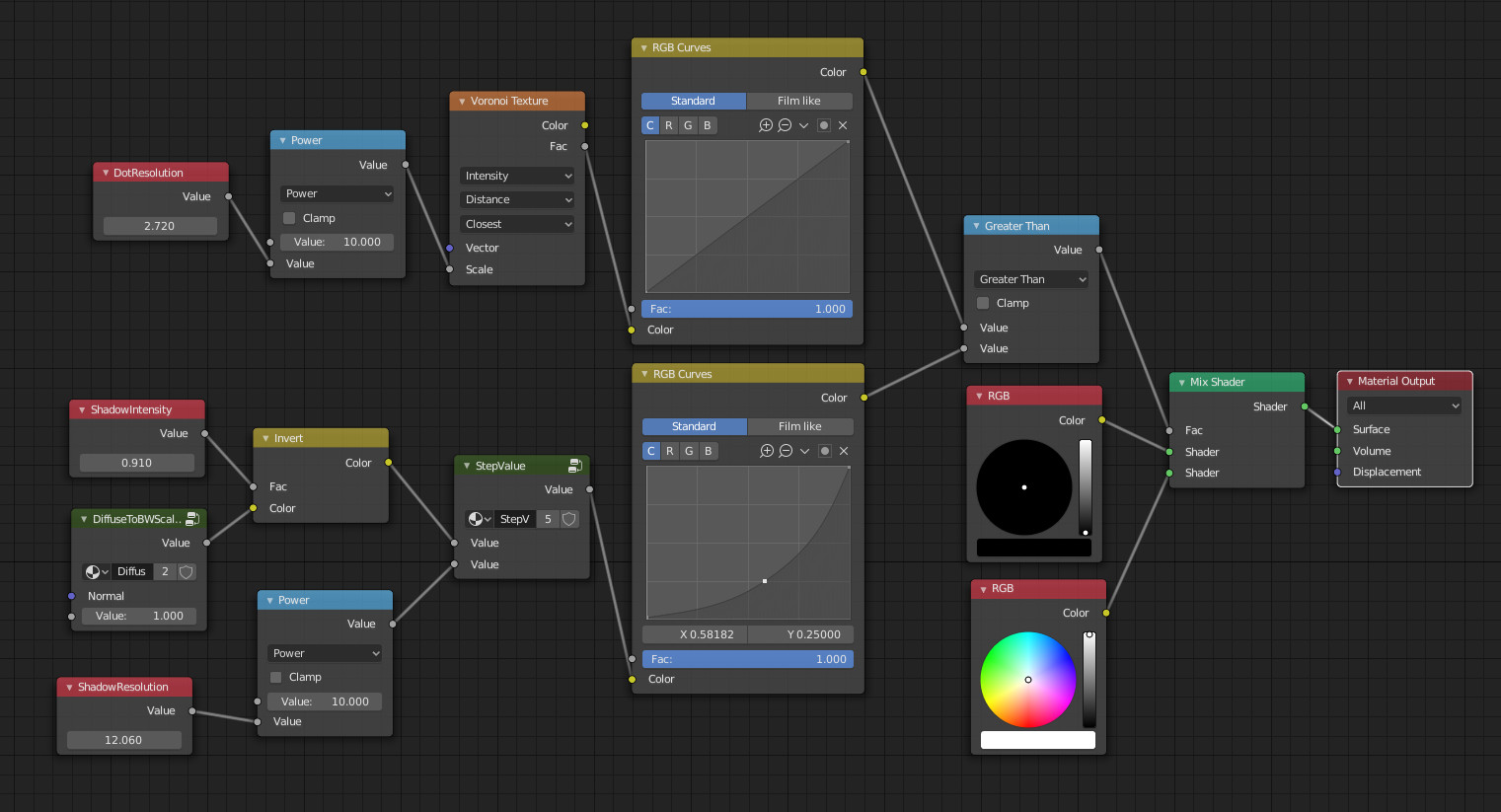 It mixes a Voronoi texture with a tunable dot resolution with the shadow intensity.

ShadowIntensity node influences a shadow intensity catcher which is into DiffuseToBW node group.

Voronoi and shadow inputs can be influenced using curves to tune the effect.

Then depending on the comparison ('greater than' node) we display black or white.

What is not solved (that's the main difficulty, surely) is how to have both regular dot size and make so that they are placed a bit randomly.

Inputs from a texture

Replacing the shadow level input node by a texture, you can have the following result:

5
How did they do these shaders/lighting?
6
How to use Halftone Python Shader node?
5
How to make a Dithering effect in blender?
3
How to create a "Airbrush-like" Shading Material
2
How to show out of bounds texture from a modulo operation
0
How to create a dithering effect?
1
How to change the scale of dots in a shader in gradient-like pattern?
0
Can stippling be used to create a 3D model?

1
Toon shading using realistic textures?
1
AA issue toon shading blender internal render
1
How to Created Stylized Grainy Cel Shading
10
ignore self-shadows for a cel shaded effect?
6
Can I colorize hair particles based on the Emitters Shading?
2
Shading not realistic - can you shed any light on this for me? (pun intended!)
4
Non-photorealistic shading + outline in an illustration aesthetic style