Motion Tracking. What do the graphs represent and how are they useful?

After tracking things on a video clip or image sequence, I get a graph with green, red and sometimes blue lines.

What do those lines represent, and how are they useful to get more accurate tracking or a better camera solution?

The red and green lines on the graph show you the speed of the trackers at a given frame. Green is vertical movement, Red is horizontal. The red and green curves will always start at zero in the first frame of the scene, and will move away from zero as the tracking points change position on the following frames. Objects closer to camera will move faster than those far away, so the speed in trackers in the foreground will be greater and objects far away will tend to stay closer to zero.

The curves are useful to see if particular trackers are moving differently than the average. A line that spikes way out of the norm might mean a tracking error, like a tracker slipping out of place, or maybe it means that an object is moving differently than the rest, and shouldn't be part of the overall camera solution. You can manually edit the curve by selecting a point in the curve and dragging it or deleting, that will affect the corresponding tracker on that particular frame.

In this example most of the trackers follow the same pattern. The green line that strays from the norm is a tracker that is wandering off. By manually moving the trackers or retracking with different parameters you could get the curve to match with the rest, but in most cases is better to re-track or find a different section of the scene that can yield more accurate tracking.

Once you have done your tracking and hit the camera solve motion button, a bunch of blue lines will appear, They represent the reprojection error for each tracker.

"The reprojection error is a geometric error corresponding to the image distance between a projected point and a measured one" (wikipedia). Blender wiki says: "Reprojection error means the average distance between reconstructed 3D position of tracks projected back to footage and original position of tracks. Basically, reprojection error below 0.3 means accurate reprojection, 0.3-3.0 means quite nice solving which still can be used. Values above 3 means some tracks should be tracked more accurately, or that values for focal length or distortion coefficients were set incorrectly."

The blue curves cannot be selected or edited directly on the graph window, but if you select a tracker on the tracking window the corresponding graphic will turn a darker blue, so you can see at what frame the reprojection is failing.

Finding the trackers with the highest reprojection errors is easier on the dopesheet for tracking data. It has a way to sort by Average error and you can see the numbers right next to the trackers name. 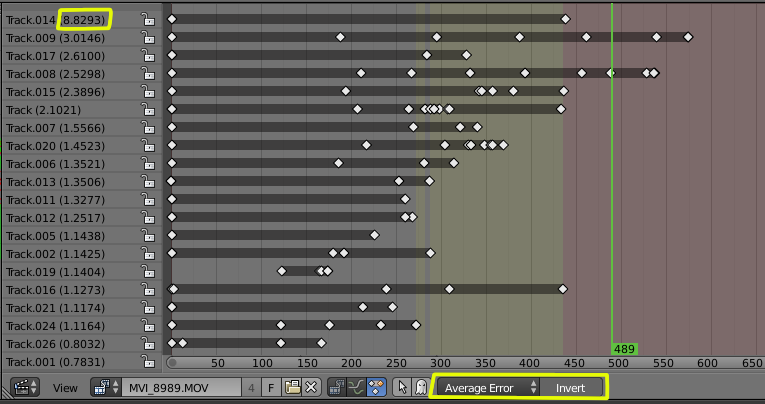 Finally, the lonely blue line that comes out when you click on the film strip is the average per frame error.

This curve is available only after pressing camera solve and is not editable. This is the one line that you want to be as flat as possible and as closer to zero as you can. The high points will show you where in your shot you are having inaccurate tracking.

1
What are the minimum parallax requirements for successful motion tracking?
1
Tracking markers are clustered together and too close to camera
3
How can I move tracking markers along the timeline?
0
3D camera tracking and object tracking are not on right position
2
Motion tracking: I have a solve. Now how to get the camera position for each video frame?
1
Motion tracking: Are two keyframes or a range of frames used to calculate relative 3D positions of tracks?