I’ve built a character surface and I’m using the Solidify Modifier to give that surface thickness and turn the surface into a shell for 3D printing.

The shell must be divided into sections to be rejoined after the 3D printing, much as you would build a hobbyist’s plastic model to be rebuilt by the hobbyist.

The modifier can create the interior normals in addition to the exterior ones, but what to do about the generated rim surface, which after the modifier, evidently has no normals or selectable surface at all? My fear is those will create problems for the 3D printer. Does anyone here have experience creating assemblable plastic models with Blender? 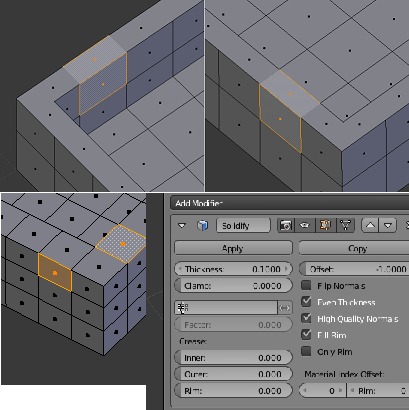 After further experiment, I can create the shell with faces along the exterior, interior and rim, if I apply the solidify modifier with these options active: Even Thickness, High Quality Normals, Fill Rim, Adjust Edge Cage to Modifier Result, Display Modifier in Edit Result and Display Modifier in Viewport (lower right image)

The result is that all surfaces appear to have an individual normal face. But note the absence of rim face edges in the top two images. Selecting any given face (if adjacent to the rim) selects three faces (the exterior, rim and interior). If not adjacent, only the exterior and interior faces are selected. I think that qualifies as a closed-manifold mesh, as I understand those. But it’s not exactly how a normal solid would be like that built entirely by extrusions (lower left image).

Any way to achieve that with the solidify modifier or steps afterwards?

Browse other questions tagged modifiers normals or ask your own question.