I have a question about animation "best practices": If I want to render my animation at 24 fps, does that mean I also need my animation preview/playback window to run at 24 fps?

Some details: I've created 15 second walk-cycle scene that I want to render at 24 fps. However, when I use the animation playback feature (alt-a), the highest framerate I'm able to achieve is 16 fps. As a result, I've prepared an animation that looks reasonable at 16 fps but is much too fast at 24 fps. Of course, I could rescale my keyframes to compensate for the difference after I've finished the animation, but I'd prefer to see something close to the finished animation the whole time.

Some optimizations I've tried to increase the playback framerate:

Things you can try to improve viewport performance:

This usually happens when I'm animating, but I have found another solution. I animate with my timeline, node editor and my graph editor open all at once, and I noticed that even if frame dropping is enabled that my PC plays the animation in around 10 -12 fps, but by only removing the graph editor, my frames go back to normal speed as it should be. I also noticed that my Blender lags a bit on other navigating controls, too, but that's also fixed by just removing the graph window.

I hope this helps for anyone still having problems after going through all the other answers.

You could use the OpenGL renderer (AKA Quick Render) to preview animations. This feature allows you to preview an animation at full speed, but without having to use Cycles/Blender Internal to render a final image. As long as you set up your render settings correctly (choose an appropriate image size, pick a video filename and codec, etc), it will quickly render your viewport to an image sequence or video file. The drawback is that it's not realtime, so it's not interactive. It adds a few steps to your animation workflow, but may be the only option for complex models on slow computers. This is how I have to preview fluid simulations, even on a fast workstation. 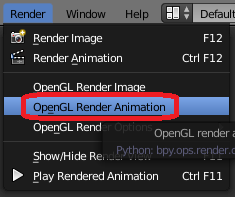 In future versions of Blender, we'll see the addition of OpenSubdiv which uses the GPU to render complex models in the viewport. Initial tests look very promising. If you have a GPU, this could end up being your solution.

Go to user preferances and system (User Preferences > System) and go to screencast. Type in 24 (or whatever frame rate you are rendering at) and it should do its best to do that frame rate in the viewport.

Found the best solution for the issue. I applied the Decimate Modifier (with a ratio to about $0.02$) to the clone of the mesh which is being animated, and moved the original mesh to another collection and disabled it.

I then animated the decimated mesh smoothly, to reveal the actual mesh hide the clone and enable the collection.

2
how to speed up viewport FPS to play in realtime?
1
How to change from 30fps in the animation view (not render)?
1
2.9.1 Low FPS on Playback

4
Looping walk cycle animation snaps back on repeat
2
Exporting fbx animations includes Garbage (UE4)
2
Why is what I am seeing in my particle effect animation playback, not what I get when I render it?
2
Cycles Render Still fine, Animation Gray
1
How to make dynamic paint work with rigid body interactions during animation playback
4
Frame rate extremely slow in 3D view port. Why?