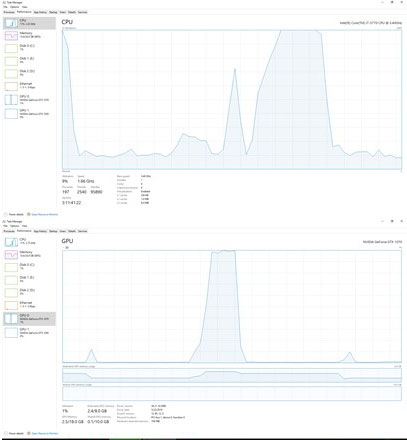 When Blender encounter a bottle neck, sometime it is not the multi-threading task like rendering tiles but a calculation in a single process thread.

And some time because the RAM speed isn't fully catch up with CPU and GPU, or sometime some I/O waiting of hardware is locking the process.

It is hard to tell what is the bottle neck from the scene, especially you just show a task manager image with low resolution. From your graph, the RAM is actually drop for a large amount during the processing. I would guess that Blender is dealing with quite large of detail from your scene, and the thing dealing in Blender is often single python thread which can't not benefit from multi-core CPU.

For speed up the rendering, there are a bunch of option in performance panel, you can try to render single image to see the speed difference.

Not the answer you're looking for? Browse other questions tagged animation eevee-render-engine performance or ask your own question.

1
Eevee - Crashes on render if render size too big
6
Eevee is using my CPU to render
1
Blender doesn't use system resources optimally
0
2.92.0 bug? EEVEE AOVs are not fully opaque