Let's assume I rendered an animation at 30 fps. Then I wanted to make it 60fps. How would I make a script to tell blender to render only the in between frames that haven't been rendered yet?

I would also need to batch rename files for the image sequence to be correct but I guess that's something else. Edit: Found "Advanced Rename" which works fine for this last part!

If you rename the already rendered files (using any batch renaming app) like make them all even or odd, then there is not much to do.

Change the speed of the animation using time remapping. 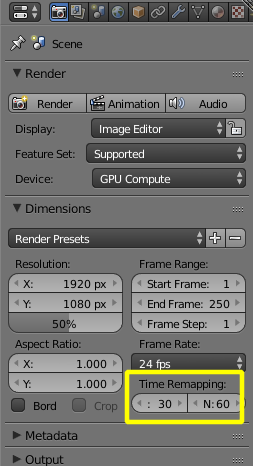 Read: How can I modify the frame rate without changing overall animation speed?

Then disable the overwrite box in the output settings.

Existing frames will be skipped and only the missing numbers will be rendered.

Not the answer you're looking for? Browse other questions tagged scripting frame-rate or ask your own question.

16
How can I modify the frame rate without changing overall animation speed?

10
Execute Python script between rendering animation frames
2
Difference between variable and property scope in a script
4
Create Seamlessly Looping Animated Displacements
1
Settings to make viewport playback drop frames in order to keep up with actual animation speed?
3
Change node links based on which Render Layer is rendering
0
Is it possible to select multiple poses from Pose Library and assign to animation at a given time frame through a blender script?
1
Shutter Speed / Average Over Frames for 2D animation