As the titles says. With a material like this one:

What I get is: In the "material" view, the texture shows up fine, mapped like I want it to be, but in the rendered view, it's rendered in an average of the color of the texture (it's not just black, I tried another texture, a wood one, and the result was a shade of brown averaged from the texture colors). As you can see, though, the preview of the material shows up fine.

ALSO: I unwrapped another object (very roughly), applied the same shader as the first one (with coordinates set to UV) and the texture renders fine. What gives? And, it definitely is an average of the color, because I even tried to draw some red stripes on the texture, because I thought that maybe the render was fine and it was some lightning quirk, but nope, non of the stripes showed up in the render.

Your UV map is disabled.

Enable it in Properties > Object > UV maps by clicking the camera icon next to your UV map: 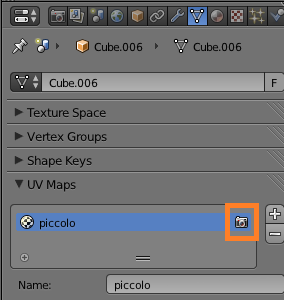 If you UV unwrapped it, then from the Texture Coordinates node, connect the UV slot to the Vector of the Image Texture. I think that will do the trick. If not, try some of the other slots. I've had this problem a few times and most of the time I can resolve it this way, but not always.

Not the answer you're looking for? Browse other questions tagged rendering cycles-render-engine texturing uv or ask your own question.

1
Materials not applying how the appear in preview (after rendering)