Does the motion tracker follow a point if it changes colour throughout the video?

Does the motion tracker follow a point if it changes colour throughout the video? Like an colour changing led dangling from a pendulum or a firework mid-flight?

Ideally you want to track objects that do not shift in shape, color or brightness. There is some room however to do some adaptable tracking.

In the tracking settings use:

If the changes are slow, those settings might help you to track an object that changes color or intensity. Note that if the changes are too drastic from frame to frame, you will need to track until the frame where the automatic tracking stops (or fails to be accurate), then manually re-position the tracker and continue the automatic process until it fails again and so on. 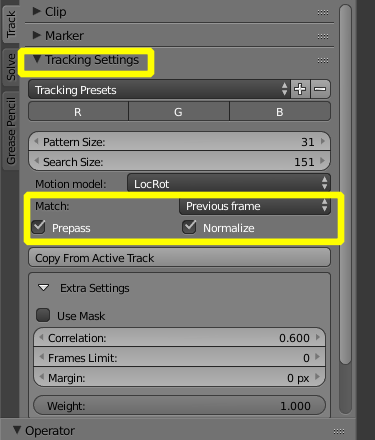 Blatant quote from the manual

Pattern Match controls which patterns get tracked; to be more precise, the pattern from which frame is getting tracked. Here is an example which should make things clearer.

Now, this is how tracking of the sequence happens. The second image is always from a frame at which the position of marker is not known (next tracking frame). But a different first image (instead of the one that immediately precedes the second image in the footage) can be sent to the tracker.

An image created from a frame on which the track was keyframed. This configuration prevents sliding from the original position (because the position which best corresponds to the original pattern is returned by the tracker), but it can lead to small jumps and can lead to failures when the feature point is deformed due to camera motion (perspective transformation, for example).

Keyframes for tracks are creating every frames, and tracking between keyframed image and next image is used. In this configuration the pattern is tracking between two neighboring frames. It allows dealing with cases of large transformations of the feature point but can lead to sliding from the original position, so it should be controlled.

Means patterns will be normalized by their average intensity while tracking, to make them invariant to illumination changes. An example where this is useful is a scene where a marker moves in the shadow of an object.

1
What is this flicker I get while tracking a camera?

5
Tracker dropdown is missing in the Tracking settings (in Movie clip editor)
5
Interlaced footage in the motion tracker?
1
Tracked video not showing in the 3D viewport in rendered mode
0
Can I use Blender like After Effects or Nuke for motion graphics?
0
Connect points of motion tracks with (smoothed) lines