New 3D enthusiast here with a very basic question: for game assets which is more desirable:

1). The complete lack of ngons? or 2). A reduced triangle count?

Here is a little more detail:

I am building a game asset, a vending machine, which is basically a big, bulky rectangular box (it will not be animated). But, because of the many details on it, it has a lot of faces subdivided, creating a large number of--seemingly--unnecessary faces that could easily be joined. This, however, would obviously create a lot of Ngons. So, I am at a dilemma. I really want to simplify the model by reducing the number of faces (it would not only make the mesh simpler to work with, but I assume the less faces also equal faster rendering, which is crucial for a game component), but I know this would create Ngons, which are supposed to be really bad (although I do not yet complete understand why).

Here is an image of my mesh: 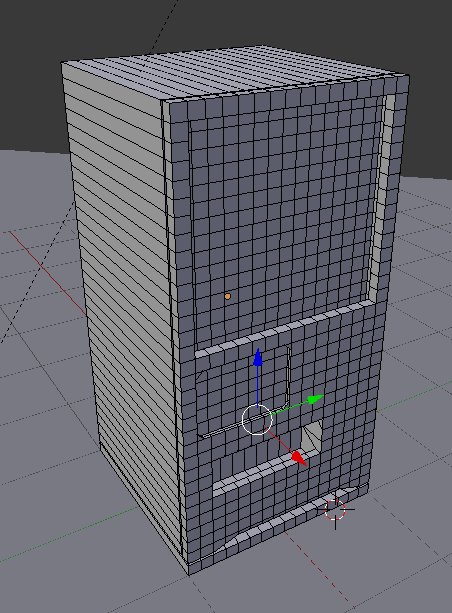 Because I am a beginner, I do not want bad habits to take root in my workflow. I want to approach and learn 3D modeling the right way. That is why I ask this question from you guys with much more experience than myself.

Let's start with the question first.

It will become Triangle faces that support the ngons vertices, exactly same when you manually triangulate any face in Blender, with some algorithm you don't know or don't care.

So the answer seems to be clear: You need to know when will an Ngons behave as same you want

We could divide the situations in following:

Then the algorithm matters, in Blender, most of the ngons can be easily triangulate:

But not all game engine use a good algorithm to deal with this thing, it might be confuse by the strange behavior, or the ngons corners is not always convex. And the UV coordinates might be messed up. You should better try it in the game editor to test it.

2. The Ngons is not flat

If the angle is small, it will be OK with the same issue in flat Ngons. But when the angle is quite big. Don't use that ngons. Quick example:

The face with 2 vertices in different height cause render engine confuse. When manually triangulate it, it might not be the thing you see in view port before.

Don't keep ngons when you are not sure what will happen to it. Use CtrlT to make them triangle, especially when it is not a flat plane.

The rest of the things

And your mesh: Separate those detail mesh if doing it will keep the mesh clean

If you are creating the game asset, then you might want to bake those detail to bump and normal map, or even displacement map. And Ngons might not be bad if the ngons is flat, and clear to triangulate. You should try on rough attempt, export the object to game engine and see what will happen.

And also, it is not that evil to separate the mesh that should be one thing in real-life. If the object is craft in that way (traditional way, not CNC or 3D printing), then do the same thing in modeling.

You may need to decrease the vertices on the large object and use details map textures. But for the tiny thing like buttons and grips, make it separated help a lot in your topologies. Look at the mesh in your vendor machine, those checked edges are meaningless.

It won't cause large overhead using multiple mesh toward rendering. In fact, there is no any cost when the vertices is not connected, the shader(program who draw your scene) only care about the number of vertices, faces and of course the textures. On the other hand, a complicated, well constructed mesh will slowdown your shader by the large amount of vertices and geometry.

But keep in mind: The shader used in these separated meshes should be the same one. Otherwise, this object will be treated as multiple draw calls. That's why it is not recommend to add too much material(shader) to your game object in Unity or other game engine.

As far as this particular model is concerned, you have mostly quads, which are most desirable. Use CTRL+X to dissolve unnecessary vertices to reduce the number of faces.

At a short glance I can tell you for sure that, you do not need that many faces if that area is going to be used flat. Like Hikariztw mentioned n-gons can be used but in this case I'm not so sure. Separation is another neat trick which you can use.

You mentioned you want to learn the correct way. And mostly the correct way is to avoid using ngons ; but having said that you must always consider it... because it is not a must. If the new topology you get by having all quads in your mesh is adding up tremendous amount of work and does not really give you any positive benefit in a game engine; then there is simply no point of trying to workout ngons into quads or tris!

You must note that ngons do not :

For those reasons, it is usually good practice to avoid them. But if the role of that ngon is not gonna interfere with those circumstances go with it.

2
Beginner question: Increasing poly density for a single side of a cube
4
How to get around triangles?
2
How do I reduce the poly count of an existing 3D model?
5
'Node' conundrum
0
I'm having trouble making my model look good with a small amount of faces
0
Bending a ping-pong racket
0
Model looks bulky with smooth shader, don't want to subdivide further, would a normal map made from a high poly version make it look better?
3
Creating a Goldberg polyhedron in Blender
1
Objects exported from Blender contain extraneous wing-like flat faces that don't display in Blender layout and modeling views