I downloaded the latest version of Blender 2.8 beta today.

I used to remove double vertices by switching to Vertex selection mode -> Choose all vertices -> Right click > choose Remove Doubles (in Blender 2.80 which I downloaded in April).

But I found the option - Remove double vertices gone. I switched to Vertex selection mode and press F3 to search but could not find it. Maybe it has got another name?

Yes, it has been rename to a more reasonable name - Merge by Distance.

Since Remove Double doesn't explain the operator well by it's own name at all. It merges those vertices which are too close to each other by a defined distance. 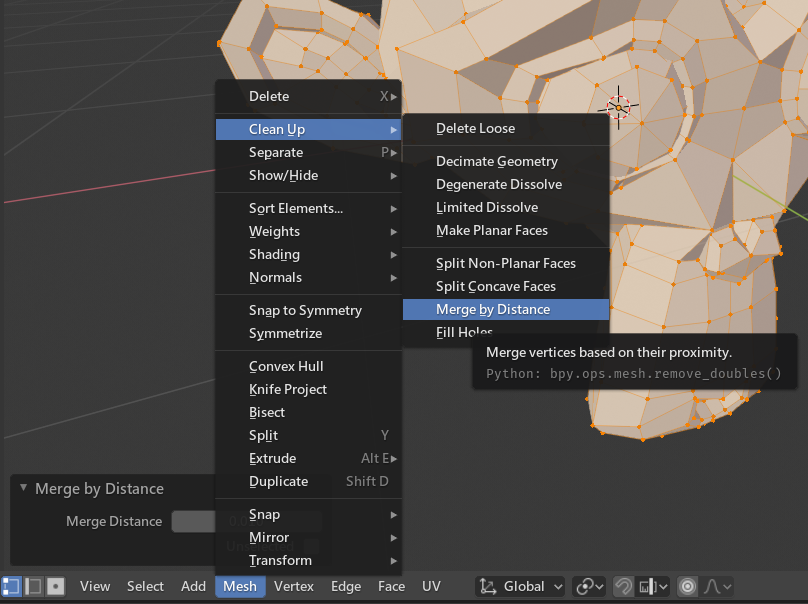 For developers, the API does't change at all, nothing to worry about it. 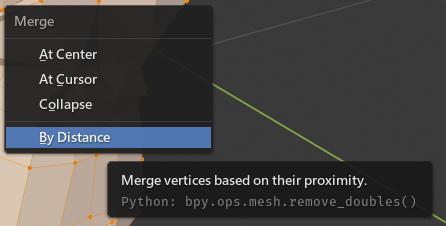 In case someone is curious about why it doesn't remove the double by exactly same position, the problem is that vertices store coordinates (x,y,z) in float numbers, a 32-bit number used commonly in computer science. It is not always precise in manipulating.

Since this situation happens a lot, Blender can't remove the duplicated vertices by exactly same value of the coordinates. Hence, compared by a tiny tolerance is a more common way to deal with this kind of problem. Therefore, Merge by Distance replaces the original name.

3
What happened to the "Merge Vertices" that existed in version 2.82 Edit Mode - Vertex drop-down menu?
0
Remove Doubles in Blender 2.93.1 Not available? How to remove double vertices
2
Specific vertices shoot off in random directions when bevelling
1
Inset pulling along wrong faces
0
Why can't I unwrap this simple cuboid mesh?
0
a hole in blender how to fix?
1
subdivision modifier doesen't smooth one edge
0
Removing Doubles is Gone in 2.8?