How to Create 2-D to 1-D Text Retraction Animation

New Blender user here and I'm trying out a few projects which I judged as "easy" to accomplish, but I'm running into a few hitches at getting exactly what I'm looking for. I want to create an animation in which thick 2-D letters retract onto 1-D skeletons via certain drawn edges between vertices in the 2-D and 1-D meshes. The animation will begin with something like this:

Then the 2-D letters will retract onto the bold 1-D letters, i.e. the edges connecting them just become smaller and smaller until the 2-D mesh is overlapping the 1-D mesh so the final image would be showing just the bold thin inner letters. Also, when I say "2-D" and "1-D" what I mean is the thicker 2-D letters will have a face between the vertices while the thin 1-D letters will just consist of edges and vertices.

My initial idea was to be able to manipulate the meshes of the text, but I am not aware how to do that as edit mode doesn't allow me to do anything but type. I planned on just extruding some vertices from the outline mesh of the 2-D letters and then merging them, creating something like the picture, but I don't exactly want to do all of that manually since it would not look good. Is there a way to accomplish this using Blender's tools?

I'm also sure that is not the best way to accomplish what I'm wanting to do, and the thin inner letters don't have to be actually 1-dimensional, just thin enough to give the appearance on rendering. It almost would look like beveling a really thin font I suppose.

EDIT: I am now trying to do this only with the letter C, since A and B having holes makes them tricky. Currently, I have just extruded the mesh of the letter out like so: 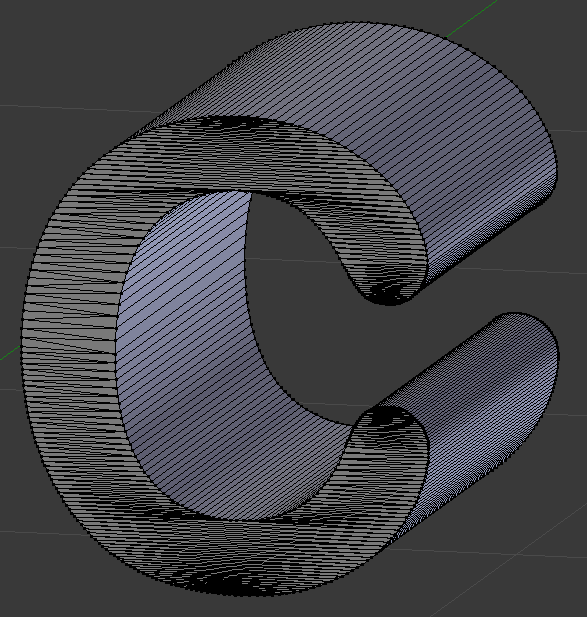 Is there a tool to collapse the vertices on border of the front C so they form the shape of the thinner bold C as shown in the picture up top? This may just be too advanced for Blender, but I am not familiar with all of the tools enough to know whether this is the case.

With the text slected, got to the properties panel, under the text tab(the one with a F icon), then under the Geometry subsection, animate the offset value.

Not the answer you're looking for? Browse other questions tagged mesh text-object text-editor or ask your own question.

20
Is it possible to animate a mesh's geometry without using Shape Keys?

2
Replace Object During Animation
1
Why won't text Boolean correctly after the second Boolean operation?
2
Solidified/Extruded text mesh errors
0
Reducing the number of faces on a basic text mesh
2
How can I increase the space between letters in a text object?
6
How Can I Quickly Create Embossed Text in the Style of a Label Maker