I am animating certain objects in a scene using audio in animation nodes. The current setup makes my models react in a very aggressive way to the audio.

Is there a simple way to smooth the reaction to it? I know that for some this might be a simple math problem but I haven't been able to wrap my head around a solution yet.

Edit: I have played around with the attack and release settings but they're not working as I would expect them to. 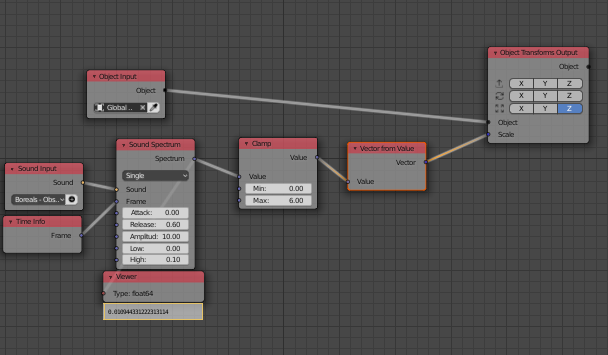 As you have guessed, the Attack and Release are the values that controls the smoothness of the visualization. But there are couple of things to note:

To have a better understanding of the inner workings on the node. I present a somewhat messy explanation. The names Attack and Release come from the concept of ADSR Envelope in music synthesis, which is short for Attack, Delay, Sustain, and Release. When you press a key on a piano, the Attack of the note is the time taken to reach the peak of the note, so a small attack value means the note reach its peak faster and snappier while a high attack value means the note reach its peak slowly and more smoothly. Similarly, the release is the time taken for the note to stop after the key is release.

In the context of music visualization, the attack and release usually have different interpretation. Lets say at frame zero, we computed the spectrum to be 10, and at frame one we computed the spectrum to be 3. This is a decrease of 7 units in just one frame! This certainly won't look good! So, instead, we give the user a "smoothed value", this value is a linear combination between the computed value and the value computed at the previous frame. The factor of the linear combination is the attack or the release value depending on whether the value increased (attack) or decreased (release). Since the value in our example decrease from 10 to 3, then the release values is utilized. And instead of giving the user 3 which implies a decrease of 7, we give the user $10 - 7(1 - \delta)$ where $\delta$ is the release value. A high value of $\delta$ translates to an output closer to 10 (Which we interpret as smoothing because it is a lower decrease) and a lower value of $\delta$ translates to an output closer to 3.

Not the answer you're looking for? Browse other questions tagged animation-nodes audio mathematics or ask your own question.

3
Animation nodes: rotate around axis
2
Dynamic Reaction Control System Animation
7
How can I make my procedural brick texture map correctly to both a cube and cylinder?
3
Maths — how to create moving waves with Animation Nodes
1
animate audio spectrum onto a sphere using animation nodes?
1
Live Audio-reaction to external input in Animation nodes?
1
what is the difference between animation nodes and audio nodes