After watching this simple tutorial , I am a bit puzzled . There is a subdivided plane which takes an empty as rotation point for a simple deform (bend modifier ) IN the screenshot you see two identical set-ups , with the only difference that the second empty (right of screen ) is rotated 90 degrees across the x and y axis . So the . Then a simple deform bend modifier , for the first one it is rotated around the z -axis of the empty ( non rotated empty ) The second set-up is rotated around the x-axis of the empty ( the rotated one ) I am puzzled why the results are different , in the rotated empty the z-axis just becomes the x-axis ...and this is used as a rotation point instead . Why does a rotated empty gives different results , when the direction of the axises are respected in the modifier ? Here's a link to the video https://www.youtube.com/watch?v=Lr49AyeM8p4&lc=z22afzo44v2bi554b04t1aokgz2rts5gnnurkbgriygybk0h00410.1554165781037170 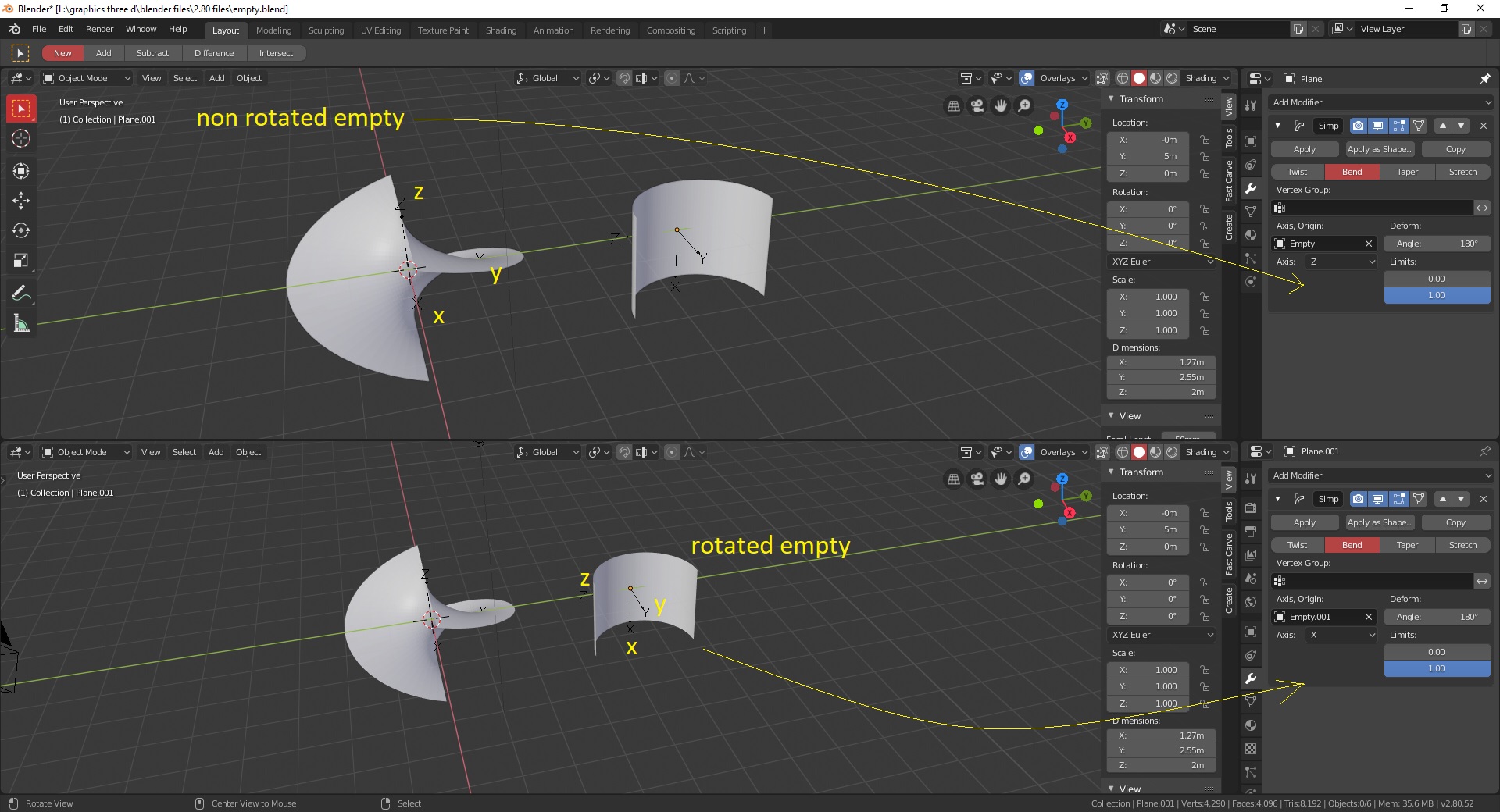 Simple deform modifier is far from simple in my opinion and there is always to learn about it. Here the subject is the bend mode.

In a basic mode with no empty, we can note that when an axis is chosen the modifier work if the object as an elongation against the two other axis.

A subdivided grid elongated in X and Y (flat in Z), will produce a result if the modifier axis is Z, but nothing if it is X or Y (because for X or Y, there is no Z elongation):

Secondly, the way this elongation is considered for Z axis here, is to Y. What I mean is the elongation is projected around a center on Y: 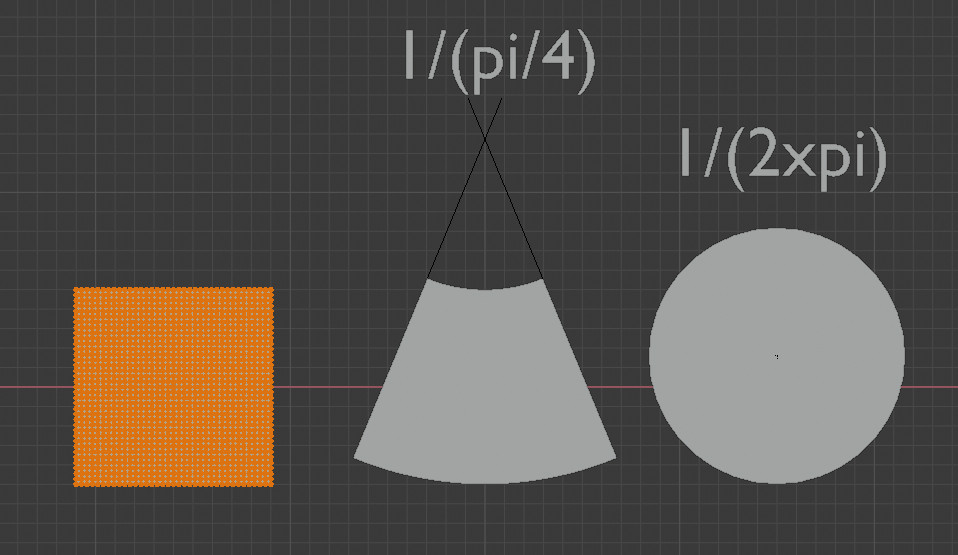 OK, I think all the main rules are there:

Now still considering the axis from the object itself, we have below two grids, both set on X axis with a 360° angle.

On left, the mesh is rotated a bit, on right it is rotated to 90° (so that the elongation on Z is maximum and we obtain a circle). 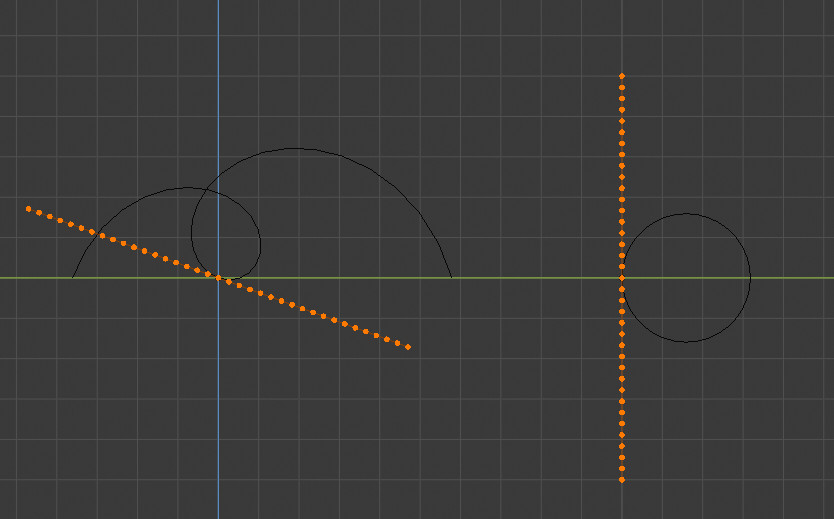 The circle was expected as the angle is 360°.

But why this spiral with another angle?

What is happening is that each side of the grid (as its origin point is centered) is participating to the bending. But as the several vertices are not placed equally to the Y axis which leads the center point of the bending, each of these vertices as its own projected center point on Y.

The circle is finally obtained if we rotate the mesh so that (again) the elongation is maximum.

Now, what if we use an empty as origin?

We can see we have nearly the same thing: 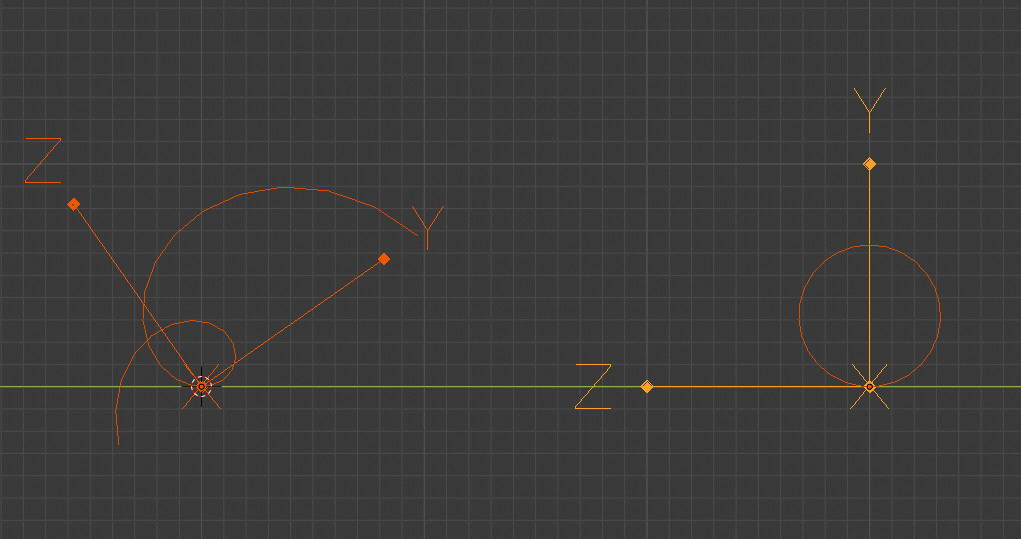 In edit mode, previously, the Y axis was still the one of the mesh.

Here, the modifier considers to project the center on the Y axis of the empty.

Consider the Y axis (of the object itself or the one of the empty) to locate the center.

Consider the axis used/defined in the modifier panel (of the object itself or the one of the empty) to know around what the bending will operate.

1
How does the Simple Deform modifier work under the hood in Blender 2.8?