can anyone tell me the best way to exactly align plane 2 to the side of plane 1 in this blend file. It's like they are 2x4 lumber. Imagine plane 1 is in a fixed position, and my task is to line up plane 2 exactly side by side to plane 1. I made all the locations and rotations random just to see the best way to align plane 2 with an arbitrary location and rotation of plane 1. Thanks for any ideas for me to try. Here's the .blend file: 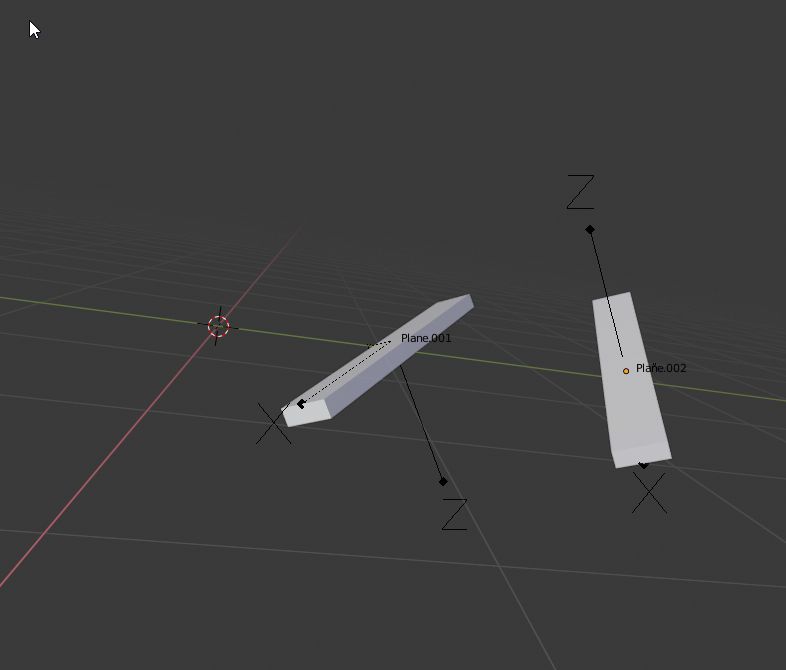 Since these object's local axes are both aligned to their meshes, you can use standard align and snapping tools.. in 2.8, all in Object Mode:

2.8 has lost a lot of standard keymaps, which makes this harder to describe than in 2.79.

Assign the matrix world of plank 1 to plank 2 and both will have the same transform, akin to adding a copy transform constraint.

Translate (move) plane 2 along local y by its y dimension it will be "side by side". (Going by axes in question. Using x would be "end to end" and z stacking "top to bottom")

Select plank1, ie make it active in 3d view, then type following in py console (C is a convenience variable for bpy.context)

then select plank2 in 3D view,

A matrix world is a 4x4 matrix, the 3x3 part is the rotation. Multiplying 3x3 matrix by y_axis is Rotating the axis such that it is converted to global coordinates. Normalizing makes it unit length

If the two objects have different y dimension, then the distance apart will be the sum of half of dimension of each.

now the planks are exactly side by side.