How can I make scene with multiple gravities going in opposite directions without using a force field?

I'm making a scene with multiple gravities affecting different objects that can interact with each other (those gravities are going in two different directions so I can't just cheat by changing an object's mass, since blender doesn't allow for negative mass values) and I want both gravities to work in the way the Gravity under the Scene tab works (a vector who's magnitude is the acceleration).

I read this but both answers present a problem for me--dampening doesn't alter the direction and force fields are fundamentally different from Blender's gravity (they pull towards a particular point or surface rather than a direction in general and the distance between them and the object just complicates things).

Is there any way I can actually set up multiple gravities for different objects or, if not, figure out a cheat to make force fields behave just like Blender's gravity (i.e. a vector who's magnitude is the acceleration and is not dependant on location)?

You can actually achieve this with force fields - providing all your objects have the same mass (or a limited range of masses so that you can have a range of forces - one set for each mass in each direction of simulated "gravity") - similar to the linked answer.

In order for the force to not fall off over distance (so it doesn't ebb away the further away from the force) you need to ensure the falloff power is 0. The strength of the force falls off based on the distance as Force = strength * distance^power (where ^ is 'raised to the power of' - sometimes written as **) - so a power of 0 results in a constant force, irrespective of distance.

Then all that is required is to place the forces and objects on multiple render layers (since forces only affect those objects on their own layer) - so all objects and the associated force that want to experience one 'direction' of gravity on one layer, the next set on another layer, etc. 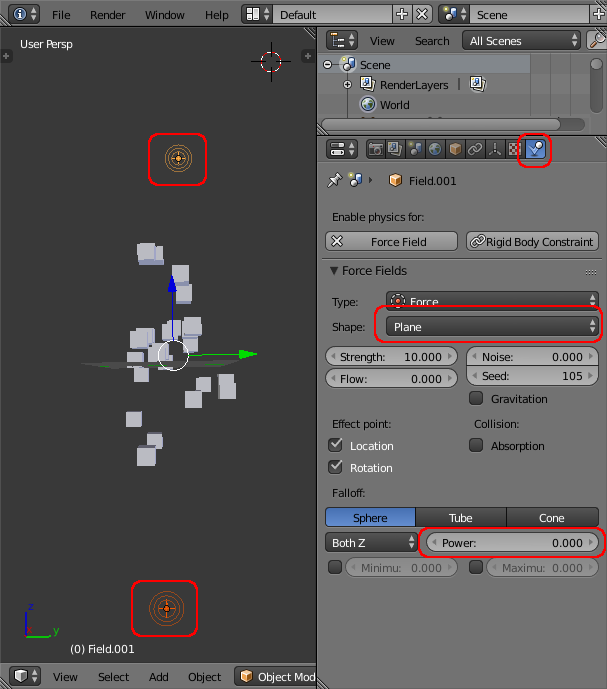 Note that this is not 'true' gravity as the force experienced by each object will be affected by its mass. To work around this, you can create a separate force per set of masses (so objects with half the mass should be paired with a force of half the strength) - obviously this will only work if you have a very limited set of masses.

Not the answer you're looking for? Browse other questions tagged physics force-fields or ask your own question.

4
Is it possible to change the gravity of a single Rigid Body in the scene?
3
How to add different Gravity velocity for different objects?

5
How to make a force field concentrate only on a specified area?
3
How do I make two objects pull toward each other in a zero-gravity scene?
4
Can I make a force field that is defined with differential equations?
1
How can I add mass to part of a cloth simulation?