I've been following this tutorial, and at about 22:45 he uses the grab brush to create the neck of our character.

At this point, using the grab brush brings Blender to an absolute crawl: it takes a second or two for the screen to redraw. Per the tutorial, I've been using dynamic topology; if I turn off dyntopo, speed returns to normal.

I understand that for a large enough mesh, dynamic topology will eventually slow down, but I thought this was at the millions of vertices point; my model only has 48K verts.

This is on a reasonably powerful computer (Xeon E5-2687W, dual 1080Ti video cards). It's running Linux (Ubuntu 18.04), and GPU acceleration for rendering works. This problem persists with Ubuntu's Blender packages, as well as the Thomas Schiex 2.79 and 2.80 packages.

How can I resolve this issue and get decent performance with dyntopo enabled?

I've made the file available here.

Update: I've been experimenting some more, and it seems that this is only a problem for the grab brush: the other brushes can all do dynamic topology without slowing down.

Update 2: actually, looking more closely, enabling dynamic topology for the grab brush doesn't seem to actually create any new topology. This screenshot shows the mesh after using the grab brush (with dyntopo enabled) to pull out the neck on my model: 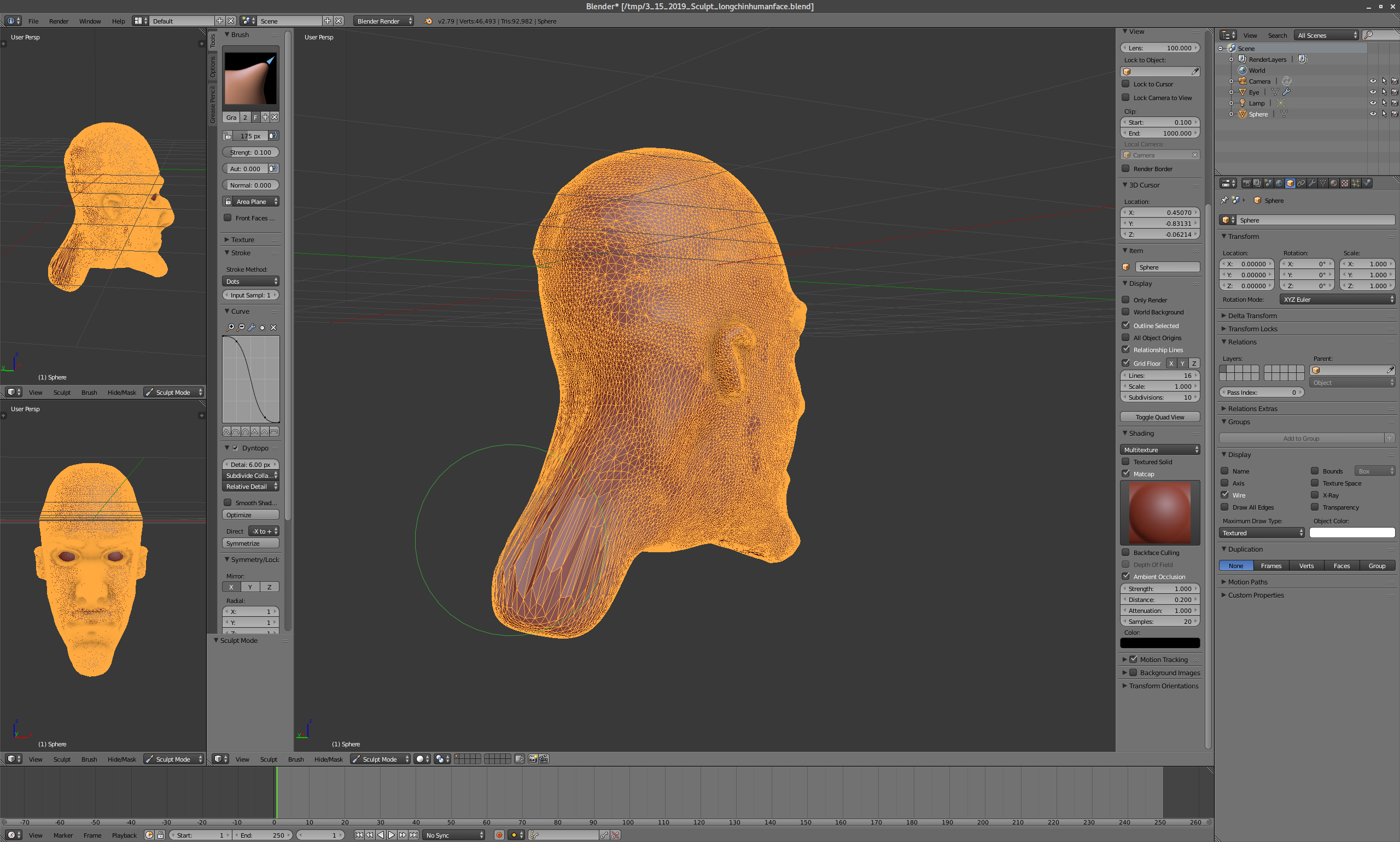 Is the grab brush not supposed to create any new topology when dyntopo is enabled? Reading the manual, this might be what's going on. If that's the case, it seems like I can just disable dyntopo for the grab brush? How can I then create new topology on the parts of the mesh that I have moved with the grab brush?

Do you have active modifiers on the object? Some modifiers will recalculate on every mesh change that occurs during dynamic sculpting.

Not the answer you're looking for? Browse other questions tagged sculpting dynamic-topology or ask your own question.

4
Possible bug? Sculpt Mode -> Simplify Brush is affecting far side of mesh
1
Project multiple textures during a DynoTopo sculpt?
2
How is adaptive subdivision different from dynamic topology?
1
how can I use a brush CUSTOM re-topology?
1
Help with Dynamic Topology
0
Sculpting Performance Workflow
1
How to undo dyntopo on a specific area?
1
Oddly specific question but what's the best way to sculpt a neck from an already existing head model?
1
The suitable brush for toes in sculpt mode?