I would like to re-create the effect in the below gif with animation nodes. As I see it the process would break down into these parts:

2)Create Geometry - Define a method of placing planes within this defined area, where the width and height of the plane randomly chosen between a defined min and max value. Together this arrangement of planes forms a perfectly filled flat surface.

3)Animate - The rectangles scale down in different directions. Not sure how you would do this a simple scale transform, I'm imagining controlling the vertex locations of the individual planes. The duration/rate of this animation is somewhat random, like the example.

I think you should take a step back and think about this problem from a different perspective. Instead of randomly choosing the width and height of the rectangles and then try to optimize their positions to be tightly packed, you can successively split the domain into smaller and smaller rectangles. This way, the rectangles are already positioned and tightly packed as you might expect.

Our general algorithm can be as follows:

We shall define each rectangles by two 2D vectors, a vector representing the location of the lower left corner, and another representing the location of the upper right corner. Let those two vectors be $(x_1, y_1)$ and $(x_2, y_2)$. We have two ways to split a rectangle into two smaller ones, horizontal splitting and vertical splitting. This diagram demonstrate how one can compute the two smaller rectangles from the original rectangle using vertical splitting: 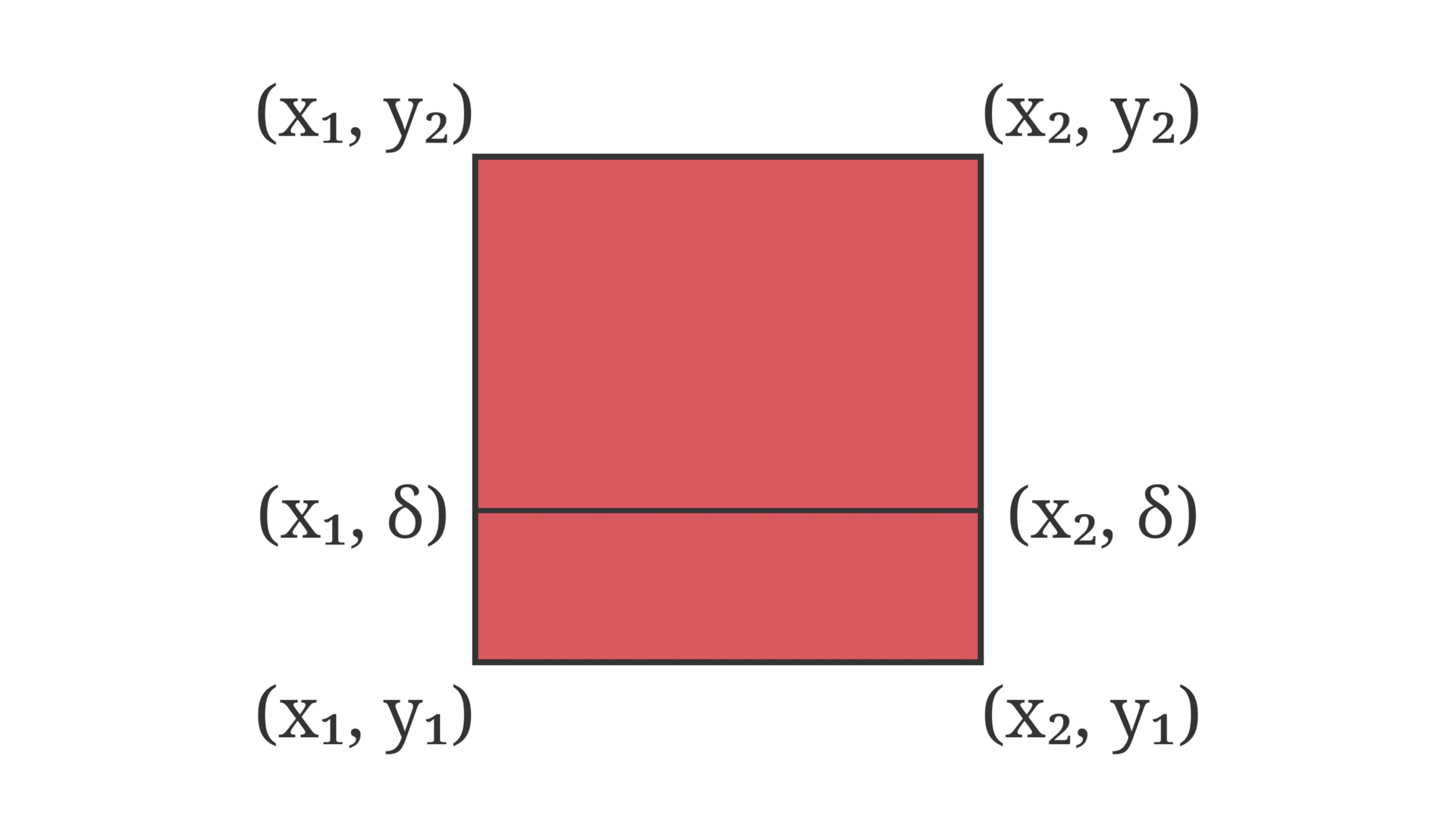 First, a random float $\delta \in [y_1, y_2]$ is chosen as the $y$ location of the splitting. Then the two rectangles are defined as:

Similarly, horizontal splitting can be done by choosing a random $\delta \in [x_1, x_2]$ and forming the two rectangles based on it.

We shall define each rectangle using a struct of four floats. Our initial rectangle list will be composed of a single struct representing a rectangle defined using an empty in the scene. The loop will output a list of structs, those structs can then easily be used to construct quad meshes which can be output and used. The high level node tree look like this:

With the Generate Rectangles loop defines as:

As for the Compute Rectangles loop, we first get the index of some random rectangles from the list. We use that index to get the rectangle and delete it from the list:

Then we compose the four rectangles (Two for each split type) based on the formula above. A random number is used to determine if the type is horizontal or or vertical by switching between rectangles. Finally, the two rectangles are combined with the rest of the rectangles and are reassigned if the area condition is met:

And by adding some value to the seed for seed control, we get:

Which gives the following result:

The animation should be easy, so I will let you do that on your own.

8
How to animate spirals on packed spheres using Animation Nodes?
0
how to achieve this grid falloff with animation nodes?